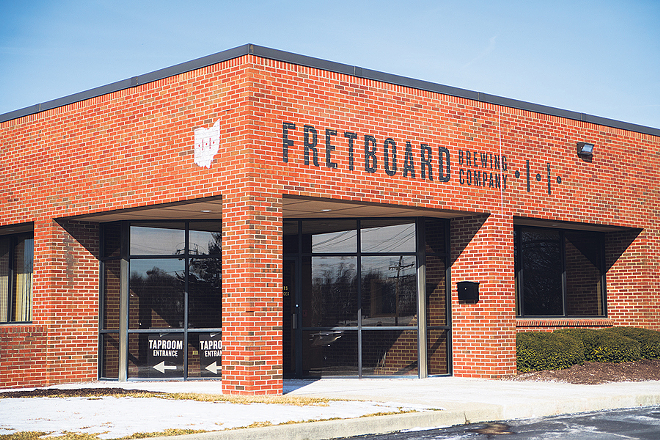 Photo: Brittany Thornton
The Blue Ash brewery/taproom is themed around music, with studio space and a performance stage.

When it comes down to it, live music and craft beer aren’t too dissimilar. They both revel in local flavor, encourage experimentation and spawn dedicated subcultures.

Bradley Plank, Jim Klosterman and Joe Sierra, the trio behind Blue Ash-based Fretboard Brewing Company, seek the perfect marriage of their two passions — music and beer — by providing creation spaces for local musicians to rattle off riffs while grabbing brews at the taproom.

“We wanted to create a brewery themed around music, how they intertwine with each other,” says head brewer Plank. Plank’s self-styled title in the company is “Head Brewer of Positive Libations” — a reference to Bob Marley’s “Positive Vibration.”

Fretboard’s main stage hosts live performances nearly every night, putting an emphasis on the sort of rootsy Blues tunes and Americana that are nearly synonymous with microbrewed beverages. The taproom is situated next to the brewing equipment, all within sight of the performance stage.

“We have bands rent out studio space and you can watch them on TV in the taproom and listen to them in what we call the Consumption Station, where you can listen to the bands practice,” Plank says. “It’s the same with beer as it is with music — you don’t ever see what goes into the process, you only hear or taste the final product. We’re trying as best we can to display the creative journey to get to the final product in a polished process.”

Plank worked in IT and brewed beer as a hobby for more than a decade before he and the other founders of Fretboard took the leap into professional brewing.

“This is my first professional job as a brewer; my résumé is being built right now,” Plank says. “I came with my home-brewing portfolio of 60 to 80 recipes and we’ve brewed maybe 10 of them.”

Kevin Moreland, former head brewer for Taft’s Ale House, recently joined Fretboard as managing partner after an initial consulting contract. The addition of Moreland, a locally renowned brewmaster who got his start with Listermann Brewing Company and founded their Triple Digit brand, lends massive industry credibility to the Fretboard team.

Plank’s partners Klosterman and Sierra, who title themselves “Lead Guitar” and “Drummer,” respectively, were so pleased with Moreland’s consulting work that getting him back on board was a no-brainer. And Moreland was as excited about their direction — especially the music.

“In my career I’ve done pretty much all the things you can do in beer. We all have a great passion for beer (and) for music as well,” Moreland says.

He goes on to reminisce about Over-the-Rhine’s Barrelhouse Brewing Company, a former brewery and music venue that was located in the building that now houses the Art Academy. Moreland sees a kinship between Fretboard and the Barrelhouse and says their goal is to construct a similar experience.

“Our first craft beer experiences were in a place we want to recreate that’s no longer here,” he says. “(The Barrelhouse) did great beer and they had great bands.”

In terms of great beer, Moreland’s dedication to brews that embrace experimentation is no secret. His recipes have earned him acclaim in the local community.

“The first beer we brewed (at Fretboard) was also one the hardest kinds to brew, our Czech pilsner ‘Vlad the Impaler,’ ” Moreland says.

“That was the first beer we put into our tanks. We haven’t changed one thing on that beer since and it’s doing really well.”

After helping open both Taft’s Ale House and Taft’s Brewpourium, Moreland left the company in January 2017 to launch his own consulting business, KDM Brewing Solutions, which took him across the city and even abroad. 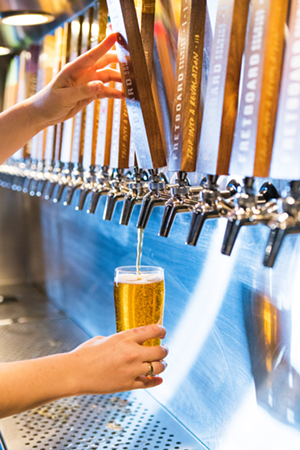 “I landed with Brad and the Fretboard team through consulting,” Moreland says. “I came in passionate about their vision, what they wanted to do. I really clicked well with Brad — I think Brad’s style of brewing and mine align in what we want to do.

“Quality is important to us. A lot of people can throw that word around, but I tried Brad’s beers before he became a professional brewer and I knew he had great talent.”

Some notable mentions from the tap list at Fretboard are the Dunkel, a traditional brown German lager; Lyric, an extra pale ale with mosaic hops; and Jazz, an American stout.

“There’s so much variety. We’re just a thirsty city,” Plank says. “We want to do traditional style and get back to Cincinnati roots-style brewing, and the German heritage is preserved with the lager, pilsners, the bachs, the dunkel. Obviously IPAs are still strong in the market, but what we’re seeing is a reset on beer drinkers going back to the basics.”

Along with beer and music, the taproom also offers classic barbecue fare from Smoked Out Cincy. The pulled pork sandwich is a popular option; they also have smoked or fried wings, sides like mac and cheese, chicken tenders for kids and a veggie burger for vegetarians.