"It was the first time we got to feed the local community where we live, and we had a very warm reception," co-owner Ryan O’Neil says about the new location. Fans of Stellar Street Eats soon can stop hunting down the food truck’s next location online, because the eatery-on-wheels is expanding with a static brick-and-mortar in Anderson Township.

“When everything shut down, our whole schedule got wiped for the year. We really had to figure ourselves out," Ryan tells CityBeat. "We went from thinking we were going bankrupt to solving problems and going full-steam ahead. We always say that failure’s not an option for us because we have our life savings wrapped up in this business. We have to succeed and we have to find a way.” 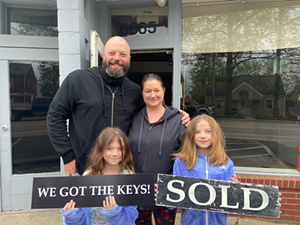 Photo: Provided by Ryan ONeil
Ryan, Ashlee Rose ONeil and their children in front of the new brick-and-mortar

The fast-casual operation will seat 10 people inside, with plans for a grand opening in July. The restaurant's main function will be for grab-and-go, curbside and “delivery to the surrounding area,” Ryan says. It will serve the same menu as the food truck, with some additions.

“We’re going to be expanding that with fresh-cut fries,” Ryan says.

The couple chose to locate the eatery in Anderson Township because they live there with their children.

“Last spring when the shutdown happened, we parked our food truck there and did really, really well," Ryan says, specifying that they actually parked their food truck in the lot connected to the new property.

"It was the first time we got to feed the local community where we live, and we had a very warm reception. The support was very heartfelt," he says.

In addition to serving food, Stellar Food Company will act as the commissary kitchen for the food truck and the pimento cheese, which currently is available for sale at both Jungle Jim’s locations, Taste on Elm, ETC provisions, Liquor City and Party Town.

“Our commissary kitchen we have now is an hour round-trip drive, so having one that’s five minutes away from our house was just very enticing," Ryan says. "(And) if we’re going to have a commissary kitchen, we might as well serve food out of it — kind of be a triple threat."

Ryan says the goal is to build on the success they've already achieved.

"We hope that we can take the equity that we’ve built in this property and use it for future ventures — wherever that leads," he says.

For more information, to find where the Stellar Street Eats food truck will be next and to follow along with Stellar Food Company's progress, visit facebook.com/SSECincy.