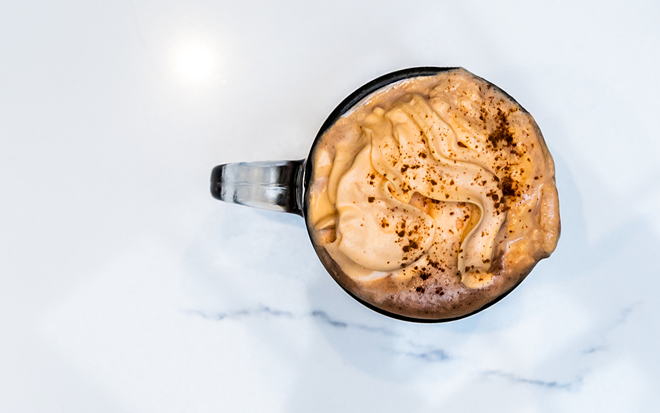 When the temperature drops, it’s always nice to have a warm drink — not only to serve as a temporary hand warmer, but also to raise your spirits. Speaking of spirits: While it’s not necessary that a winter tipple be made with alcohol, if someone else is going to steer the sleigh, why not fortify your holiday cheer with a nice, warm cocktail? Here’s a few from local bars to add to your list.

“Comfort Station’s iteration is a play on the age-old Mexican hot chocolate,” says General Manager Jack Keane. “We like to challenge our young and up-and-coming bartenders to experiment and try new things, even if they aren’t always successful. This time it worked out with the experiment of Sriracha whipped cream and I couldn’t be prouder.”

Justin Marquis, bartender at 1215 Wine Bar & Coffee Lab, recommends an old Italian favorite, the caffee corretto, which translates to “corrected coffee.” In this case, the correction is made via a shot of liquor.

“There are as many versions as there are liquors that can be added to coffee,” Marquis says. “I like mine as a 2-ounce shot of espresso with an ounce of either Italian amaro or grappa or some other grape brandy.”

Marquis favors Amaro Averna, which he says has just enough sweetness to counter the bitterness of the coffee and bitter botanicals in the liquor.

“It warms you with temperature, caffeine and a little alcohol buzz quickly and efficiently,” he says. “Its strong flavors and concentration mean it’s taken in small quantities, ideal for short breaks from work or a quick step in the bar while enjoying a winter day outside.”

The hot toddy is another excellent way to face the cold winds of winter. Jen Miller, bartender at Longfellow, likes to start her toddy recipe with two ounces of Irish whiskey, rum or brandy. She’ll reach for Tullamore Dew (their Cider Cask in particular), Appleton Estate Signature Blend, or Asbach Uralt (a German brandy). The liquor of choice is poured into a preheated mug with six ounces of hot water mixed with a barspoon of Carriage House Farms honey and garnished with a lemon slice studded with whole cloves.

“It has an appealing simplicity: just good booze, hot water, citrus and spice,” Miller says. “Anyone can make one, but attention to detail — and a properly temped glass — really make it special.”

If you’d like a little caffeinated kick with your toddy, try The Goldwing from The Listing Loon. It is made with hot water, Wild Turkey Rye (for a little spice) and honey. The Loon’s resident bartender, Sammy Burroughs, wanted to make this recipe a little smoky and thought Lapsang Souchong black tea would be the right fit.

“Our staff came together and tasted The Goldwing for the first time, and everyone exclaimed it’s like being at a campfire,” says Listing Loon owner Melanie Quallen. “When you sip on The Goldwing, it tastes like you are getting wrapped up in a blanket of smoky autumn.”

Photo: Provided by Miracle
The Bad Santa at Overlook Lodge

On the warmer side, try the Bad Santa — “a hot rum drink that will make sure you end up on the naughty list,” says owner Jacob Trevino. The drink, served warm, is mix of rum, Batavia Arrack, black chai tea, date-infused oat milk and vanilla syrup.

A big batch of something to melt the icicles off your eyebrows is always a welcome addition, such as the clarified milk punch served at Oakley Wines.

“This drink is meant to be made in larger quantities, at least eight guests, so it’s really perfect for sharing with friends and family,” says Liz Wolf, head bartender at Oakley Wines. “It lasts for months, even years, since the process of clarifying the milk actually stabilizes the punch, strips away the harsh compounds of the citrus and the alcohol and the result is a silky smooth, boozy bev.”

Wolf’s recipe infuses two cups of brandy, either Pierre Ferrand Cognac or Watershed Apple Brandy, with a quarter cup of Earl Grey tea leaves, and a half ounce each of lemon peels and orange peels in a lidded container. Let the mix sit at room temperature for at least 18 hours or up to two days. Strain and discard the tea and citrus peels.

Now that the brandy is suitably flavored, warm one cup of full-fat milk on the stove until it’s steaming, but don’t let it boil. In a large liquid measuring cup or pitcher, whisk the infused brandy, two cups of water, four ounces of turbinado simple syrup (equal parts warm water and turbinado sugar combined), lemon juice and orange juice. Once thoroughly heated, set the milk aside in a glass bowl and pour the brandy mixture into the milk. Gently stir the resulting curds with a small spoon and then let it sit for at least 30 minutes or cover and refrigerate for up to 24 hours.

Strain the concoction several times through cheesecloth and a fine mesh sieve and discard the curds. Then filter the liquid again through a coffee filter. The resulting liquid should now be clear, but if it’s a bit cloudy let it settle for half an hour and then filter it once more. To serve warm, bring the punch to temperature — never to boil — on the stove, pour into a glass and garnish with an orange peel.