The Empanada's Box menu features the namesake pastry infused with flavors from across the globe. And Herban Vegans offers plant-based eats, with a focus on vegan seafood.

And not only does this mark a couple of fresh places to grab a bite, it's also the official debut of Findlay Launch — "the first Storefront Accelerator of its kind in our region, with a specific focus on giving real-time experience and industry education to food retail and restaurant concepts," says a release.

The idea is to support BIPOC-, women- and immigrant-owned food businesses in order to diversify and build inclusivity in the local culinary scene. 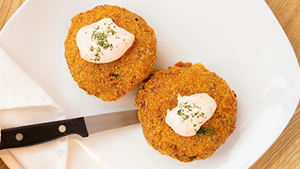 Each Findlay Launch entrepreneur goes through nine weeks of retail/restaurant boot camp, led by "industry experts." At graduation, they get a short-term storefront lease at Findlay Market to test their business in a low-risk environment.

“We are thrilled to be able to provide food entrepreneurs with fully built-out storefront spaces and a food retail and restaurant-focused curriculum through Findlay Launch," says Marianne Hamilton, Food Innovation Director for the Corporation for Findlay Market, in a release.

"This will help them gain the experience of operating their business full-time, with the necessary support and network-building needed to give them the confidence and resources to launch their dreams.”

Photo: Provided by Findlay Market
The team behind The Empanada's Box, including Diego Nunez (middle)

The Empanada's Box and Herban Vegans will officially open at 11 a.m. Sept. 3 and operate their new storefronts for a minimum of nine months.

Diego Nunez is from Argentina and is the mind behind The Empanada's Box, which will be located at 1811 Elm St. He grew up in a restaurant family in Buenos Aires before moving to the United States in 2000. He has been focusing his food dream on empanadas for the past 15 years and has involved his own family here in the new business.

The Empanada's Box menu will feature the namesake pastry infused with flavors from across the globe.

Herban Vegans, located at 1809 Elm St., is helmed by Danilelle Delaine, who began this specific culinary journey in 2017. Her goal is to show diners how tasty and healthy a vegan diet can be — specifically vegan seafood — with a lot of herbs, spices and ingredients.

"A personal health scare over 20 years ago, and watching a world succumb to disease and unhealthy choices, became a fire in her belly to help do her part," says a release from Findlay about Delaine and her vegan menu.

“We are truly grateful to be a part of the family of Launch business owners," says Delaine. "The support and guidance that we have received is priceless, and we are fortunate to be able to apply everything that we are learning immediately and put it in action."

For more information on the Findlay Launch program, visit findlaylaunch.org.