The Empanada's Box is the first graduate of the Findlay Launch Accelerator program. 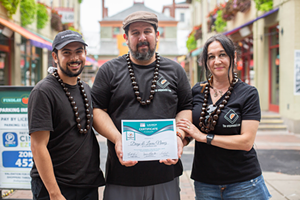 Photo: Provided by Findlay Market
The team behind The Empanada's Box, including Diego Nunez (middle)

The Empanada's Box was started by Diego Nunez in 2020, inspired by his parent's restaurant and bakery in Buenos Aires. Nunez moved to the U.S. in 2000, hoping to develop his own restaurant in the states.

Nunez began selling his delicious stuffed pastries as a pop-up in Findlay Market and moved to the Findlay Launch sight on Elm Street in September of 2021.

Findlay Market announced in a press release that Empanada's Box will be the first business to complete the Findlay Launch program and storefront residency.

Each Findlay Launch entrepreneur goes through nine weeks of retail/restaurant boot camp, led by "industry experts." At graduation, they get a short-term storefront lease at Findlay Market to test their business in a low-risk environment.

You can visit The Empanada's Box on Elm Street until June 12. But don’t fret, you’ll be able to stop by its permanent location at 212 W. Pike St. in Covington by June 22.

Findlay Launch is hosting a graduation ceremony for The Empanada's Box on June 10. The ceremony will be held at the market’s bar, Jane’s, from noon 12:25 p.m. with speakers from Findlay Market and the City of Covington leading the ceremony.