The Reopened and Reinvigorated Postmark Offers Fine Dining in Clifton

Chef/owner Brad Bernstein’s neighborhood bistro is back with a new wine shop, plus a focus on live music and event dining 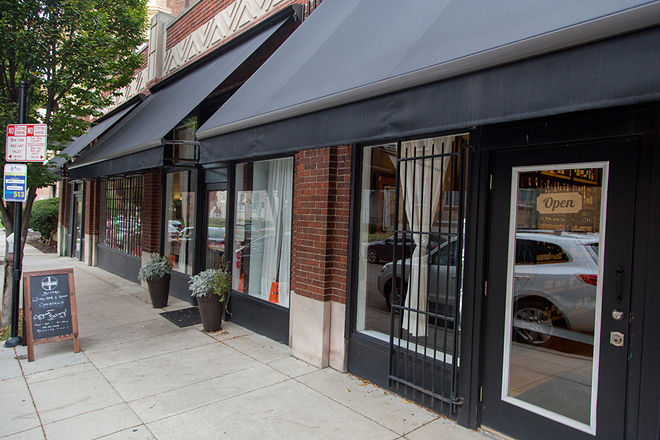 As a Cliftonite of almost 25 years, I’ve followed with avid interest the fortunes of several restaurants on Telford Street in a building that once housed the neighborhood’s post office. The first one was Tink’s Café, in the mid-2000s, which started a welcome trend of using the space for the closest thing to fine dining in Gaslight Clifton. That tradition continues today with the reopened Postmark, part of chef/owner Brad Bernstein’s growing mini-empire that includes Red Feather Kitchen and the recently acquired Dutch’s, both on the East Side.

During the pandemic, I’ve walked the streets of Clifton every day, many times passing the mostly dark Postmark. I had heard from neighbors that it had partially reopened with casual events, often including live music, during the summer months, but I never saw any publicity or signage about what and when these meals occurred. A few weeks ago, I spotted menus posted on the window, and days/hours of service.

It didn’t take me long to plan having dinner there, with the added incentive that the weather promised a few more warm-enough days where their sidewalk tables would be available. My date and I nabbed one on a quiet Thursday night, and I’m happy to say that the meal lived up to our expectations — and then some.

Postmark now offers a three-course tasting menu for $35, although you can order everything à la carte, as well.  The first course covers soups and salads, the second course includes a selection of four pasta preparations, and you finish with one of four entrées. In addition, the menu section Boards, Baskets & Snacks offers an array of tasty items priced by the piece. For instance, the bruschetta I selected with my salad course — toasted bread with mozzarella, cherry tomato and pesto — was listed at $2 for one piece or $5 for three.

Other than my single slice of that toast, we didn’t try anything from the snacks section. David opted for three courses and, since I didn’t want a pasta course that night, I went with salad and entrée — leaving room for dessert, I calculated.

Postmark has redone its side dining room into a wine shop, and diners can select a bottle and enjoy it with the meal for $10 corkage fee on top of the retail price. David went inside with our server and came back with a value-priced Oregon pinot noir; at $23 for the bottle and corkage, it complemented nicely the range of meat and fish we selected.

The Soup & Salad section includes one of my favorite appetizers, beef (here called steak) carpaccio, very thinly sliced raw meat with a light vinaigrette and shaved Parmesan ($12). David ordered butternut squash soup topped with pepita brittle for crunch and a dollop of stewed apple and fennel ($6). The soup was creamy, slightly sweet and lovely, and while I liked the carpaccio, I also wished for a larger portion. His pasta course, cacio e pepe ($8) also wasn’t large, but it was just right as an intermezzo between the rather rich soup and his Steak Diane entrée ($20).

Both that and my Sole Meuniere ($19) were the stars of our meal. For the Diane, slices of meltingly tender beef tenderloin came smothered in mushroom bordelaise sauce accompanied by roasted potatoes. The sole, a thin and light piece of fish, was perfectly cooked with a bit of brown crust around its edges. It rested on a dice of wilted greens made tangy with lemon and capers. I loved that dish and will be back for seconds, assuming it stays on the menu.

As a matter of fact, Postmark changed a few items on the list just a couple days after our dinner, but the Diane and Meuniere remained. Smart move.

For dessert, our server offered crème brulee, chocolate mousse and lemon tart.  Chocolate seems to be a magic word for David, so he went with the mousse ($7), a worthy take on that traditional sweet ending. I opted for the lemon tart and was delighted by this version; basically, a deconstructed treat served more like a pudding, with small meringue cookies adding sweetness and crunch to the tart lemon pudding. I loved it and it’s another dish I hope they’ll keep making.

Having heard from our server that it was the last day of that menu, I wanted to get an update on the changes. Carry-out seemed to be the best way for a quick revisit, so I picked up a three-course tasting ($35) and brought home three dishes we hadn’t tried. One was the Bistro Salad ($8 a la carte), built around the freshest butter lettuce imaginable, no small feat for restaurants that may face a lot of food waste during these challenging times. As much as I appreciated the high-quality greens, the other salad ingredients were sparse — a few thinly sliced shallots and some pine nuts — to the point where I added some enhancements of my own. The vinaigrette was rather lackluster, too.

As a pasta course, I took the newly offered Risotto alla Milanese ($11 a la carte), intrigued by the lobster, saffron and chorizo preparation. While I couldn’t find any evidence of lobster in my portion, chorizo gave it a nice zip. Finally, the Braised Lamb entrée ($21 a la carte) with baby carrots, leeks and parsnip puree had just the right savory heft for the autumnal season. The other new entrée, Winter Squash with lentils, wheat berries and golden raisins ($17) also caught my eye, but sometimes you just have to choose, and the bottle of cabernet sauvignon I’d opened the night before cried out for the lamb.

Although few diners joined us the evening we ate at Postmark, staff members told me that business had been picking up by mid-October and that the previous Saturday had been fully booked.  It’s wonderful to have this level of cooking on my side of town, and I hope those bookings continue and help Postmark thrive.