From an '80s- and '90s-themed blast from the past to the drunken and high-speed Danger Wheel, July and August offer up plenty of themed boozy fun. 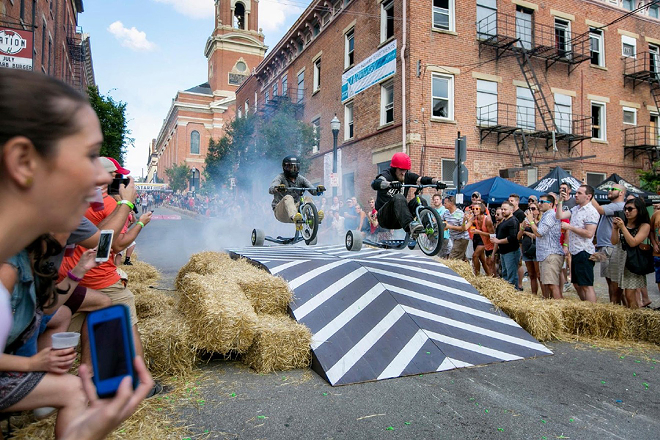 July and August must be the months for pub crawls, because the city has quite a few of them planned. On Saturday, wear your best (worst?) ’80s and ’90s attire for The Decades Crawl in Over-the-Rhine. With your $15 ticket, you get a neon fanny pack and cocktail and beer specials at 16-Bit, MOTR (a $3 Malibu Barbie drink), the Drinkery OTR and more, including Below Zero, which will be hosting a themed drag show.

The third-annual Danger Wheel returns at noon on Saturday. During the “tournament of bravery and outdoor jollification,” drunk adults will ride provided big wheels down a steep hill in Pendleton. Local breweries will be selling summer-style beers to give participants liquid courage. The cost is $100 for a team of three (two to provide a running start; one idiot to drive).

Covington hosts an interactive version of the board game Clue on Aug. 12. Someone murdered the Goose Girl, and six suspects and murder weapons are the options. During the Get a Clue Covington murder mystery pub crawl, visit six bars and order a Braxton or New Belgium beer to receive clues. (We’re pretty sure one of the Goebel Goats did it.)

• The Western & Southern/WEBN Fireworks won’t light up the sky until Sept. 3, but official fireworks beer sponsor Braxton has started the party early by releasing Short Fuse, a pale ale brewed with cascade and centennial hops and grapefruit juice. The beer is currently available at their Covington taproom on draft and in cans and will be distributed up until Riverfest.

• Blank Slate recently released a new seasonal can: PilMo, a mosaic-hopped kölsch and the perfect lawnmower beer. PilMo is available while supplies last at $9.99 plus tax per case (with a one-case limit).

•  On Aug. 5, the 9-year-old Listermann will unveil a branding refresh along with two new limited-run can releases: Lil Jimmy, a NE DIPA with citra lupulin powder, mandarina bavaria and cascade hops; and Bring the Hops, another NE DIPA but brewed with zythos, citra, galaxy and lemondrop hops. (We’re waiting for them to brew What’s the Hops.)

• Starting on Aug. 11 and running every Friday and Saturday night through Sept. 16, Darkness Brewing will co-produce Last Call for Alcohol, “a sketch comedy interactive drinking game show” directed by Ricky W. Glore, who also directed A Nightmare on Backstreet: A Boy Band Musical Parody. Tickets ($15) include admission and one beer.

• Urban Artifact’s Bewilderfest takes place Aug. 25-27. The theme of the fest is experimentation, so live bands will perform songs “outside of their normal repertoire,” and Urban Artifact and other local breweries will have some unusual beers for sale.

• On Aug. 26, Spring Grove Cemetery presents An Afternoon with the Beer Barons. Docents will share history about the beer barons buried there while serving beers from 14 local breweries including Fibonacci, Fifty West and Dayton’s Toxic Brewing. ©