Ben Arington — the pastry artist behind Fat Ben's Bakery — specializes in over-the-top cake creations that look like everything from fried chicken and a stack of pancakes to a 3-Way and a bottle of vodka. 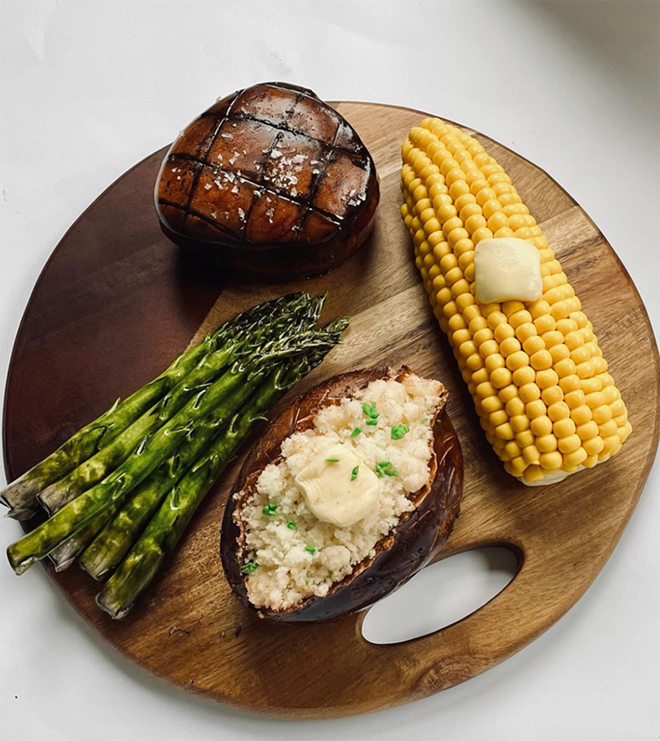 As Surrealist René Magritte would say: This is not a pipe.

And this steak dinner is not a steak. It is instead a hyperreal cake creation from Ben Arington, the pastry artist behind Cincinnati's Fat Ben's Bakery.

Arington, known for his over-the-top, imaginative baked goods, has been in the pastry and food field for more than 15 years. He says he was drawn to the industry as a way to utilize his energy in a creative way. According to Arington, he needed a way to keep his “jazz hands” busy, and the kitchen as an outlet suits him well. “Let's be honest, you can't put the ‘jazz hands’ guy in an office,” Arington said in an email interview with CityBeat last year.

Arington creates aesthetically pleasing treats, all while keeping it “weird” and pushing the boundaries of what conventional baked goods should look like. In the previous interview, he brought up the time he made a sunglasses-shaped brownie with candy cigarettes to resemble a piece Lady Gaga wore in her “Telephone” music video. “I mean, that's the kind of stuff people are wanting from me. You go to your more traditional bakeries for your glazed donuts or whatever but you come to Fat Ben's Bakery for the WOW factor,” he said at the time.

He also dedicates a lot of his business to making cakes — from simple to elaborate — for celebrations like birthdays and weddings. Recently, he's decorated cakes to look like everything from fried chicken and a stack of pancakes to a 3-Way and a bottle of vodka.

This steak dinner set that Arington posted on Oct. 19 was a birthday cake. CityBeat emailed Arington to learn more about his process, how long it took and what it tasted like.

CityBeat: What do you use to construct your look-alike cake shapes? Is it all edible?

Ben Arington: When constructing cakes that require a lot of detail, the best thing to use is modeling chocolate. Fondant (a sculptable type of icing) is great for a lot of things, but it's really hard to carve and mold and to scratch-in detail. The perks of using modeling chocolate is that it gets warm in your hands and it allows you to manipulate it to do whatever you want. But also, personally, I think it tastes a lot better than fondant. Everything I use when making these types of cakes is edible.

CB: What did you use for coloring?

BA: There is so much that goes into making something look the way it's supposed to. For example, I had to use four different greens, three colors of purple, and a small amount of yellow to get the asparagus to look realistic. I ended up using Wilton food coloring as well as adding some luster dust to achieve the likeness of the food item.

CB: What "painting" or decorating technique do you use to make it look so realistic?

BA: Oh man. There are so many ways to achieve realistic looks. Once, I used the mesh of a bath loofah (a new one, LOL) to put a "scale" effect on a dinosaur cake. Typically I use anything laying around the house. To make the corn on the cob, I used a pearl necklace mold and once I turned it out, I cut it into four pieces and gently squeezed it together to (turn) the round pearl look into a corn on the cob look. I did that many, many, many times to get that corn together.

I used a pair of scissors for the asparagus. I did tiny cuts to make the tips of the asparagus and then just did some sporadic ones around the rest of it. The steak required more attention. I actually used multiple sculpting tools, knives, forks, as well as six different-sized paint brushes to shape and color the steak. I also used a torch to caramelize it and give it that "lifelike" color. I did the same method on the baked potato. The top of the potato is just some of the cake scraps mixed with a little buttercream and presto: instant baked potato.

When it comes to getting the color right, I always start light, just gently adding more and more color as needed. I painted the steak with like six different colors, seriously: brown, black, white, maroon, purple, and red.

CB: What flavors are each of the cakes?

BA: Since the asparagus was in individual pieces, I actually just used fondant for those. But the other three pieces were black cherry marshmallow flavored. It was absolutely delicious (if I say so myself). It was like if cherry cordial ice cream had marshmallow fluff on it *chef's kiss*.

CB: How long did this cake take?

BA: The cake surprisingly wasn't terrible. It took me about eight hours. When I make cakes for my family or close friends I pay so much attention to all the little details. I want to make sure it's perfect. I would say the asparagus and the corn on the cob were the most difficult pieces.

CB: You use the tag #hyperrealism, which it truly is. Would you describe your cake style as hyperrealistic? I would imagine there's a certain sense of joy and achievement that comes with making cake look like steak, or a 3-Way or a bowl of cereal. Is it fun to challenge the concept of what something is "supposed" to look like?

BA: I wouldn't describe my style as "hyperrealistic," but I would love to. For me, there is a difference between "realistic" and "hyperrealistic." Realistic is when I make something larger or smaller than normal but it looks like it could be real. Like, when I made a small cake look like a skateboard or a DJ board. You see it, and you're like, "Wow that looks just like it!" But hyperrealistic cakes are when I make things that are actual size, color, etc. The steak "dinner" cake is hyperrealistc. Everything was actually measured with a ruler to keep it to size. I did the same thing for this Air Jordan shoe. It's hyperrealistic because I modeled everything off an actual shoe. I LOVE doing hyperrealism cakes though. But it's hard to convince somebody to let me make a cake that looks like a bundle of asparagus in actual size. It would only feed like three people, haha. I was emailing back and forth with a client where I was trying SO HARD to have her let me make a cake that looked like Wendy's Spicy Nuggets. But, she decided to go a different route. But I want to start doing more of it because I truly think making cakes look like food items is my specialty.

CB: What is your ordering process going to be going forward? I know you had posted about limiting some of your baking to focus on other things. Will you be continuing Fat Ben's in the future? If people want to place an order for a cake, how far in advance should they get ahold of you? And what's the best way to order?

BA: If you're interested in ordering something, you can email me at [email protected]. I'm a one-man show and sometimes it takes a few days for me to get back to you. But I try my hardest to make sure I respond back to everybody. I typically ask for 12 days notice. But I'm getting like six requests a day (minimum) so if you really want something, I would email as soon as you can.

I posted a while ago that I was going to end Fat Ben's Bakery at the end of the year. Truth is, I've been full force for over six years and working seven days a week. I'm really exhausted. I received something like 230 messages from people either congratulating me for taking a step back or people begging me not to stop. Either way it was amazing and everybody has been supportive with whatever decision I made. But, I think instead of ending now, I'm just going to better manage my time. I think I'll continue taking cake requests but make sure I carve a lot more "me" time for my own mental health. I also think I'm going to start being a little more picky with what cakes I want to make. Typically I just feel bad saying no so I tell everybody, "Sure I'll do it." ...I want to start doing really fun stuff. Things that'll challenge my skills. So, I guess you heard it here first. FBB is still in the game in 2022.