The brewery has gifted Missing Linck's rare yeast strain to the city, which has declared June 1 Missing Linck Day 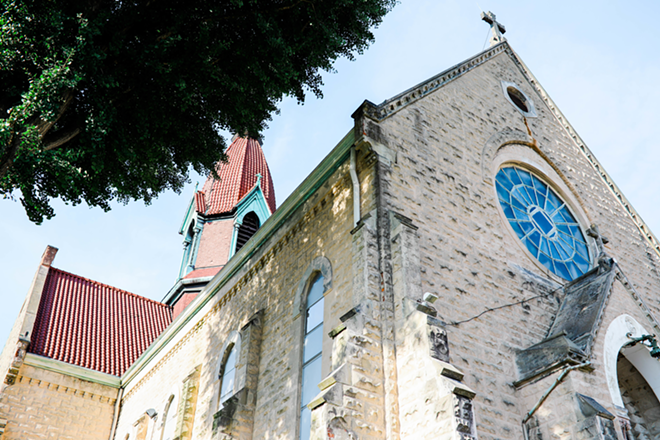 A city full of German immigrants, pre-Prohibition Cincinnati had no shortage of breweries. Some — like the Christian Moerlein and Hudepohl brewing companies, founded in 1853 and 1855, respectively — have stood the test of time, while so many others went out of business and were lost to history.

The F. & J.A. Linck Brewery is one such relic. In 1855, the company built a cavernous lagering cellar beneath their malthouse on Race Street near Findlay Market, but its time was short-lived. The brewery closed in 1860. The malthouse was demolished and replaced by tenement buildings in the 1870s. The lagering cellar was sealed shut and forgotten.

That is until it was rediscovered a century-and-a-half later.

In 2016, Mike Morgan, historian behind the newly opened Cincinnati Brewing Heritage Trail and author of the newly released book Cincinnati Beer, caught wind of the find and shared the news with Urban Artifact brewmaster Bret Baker.

“Cellars get found, that happens,” Morgan says. “What was unique about this was they found an intact 19th-century fermenting vat in it. I asked Bret if there was any chance in hell that there could be usable yeast in that vat (to make a beer). He said, ‘Probably not, but maybe.’ ”

It was a shot in the dark — and more or less just an excuse to explore the tunnels — but by April 2017 the pair found themselves on the hunt for yeast in the depths of the old Linck cellar.

The process of collecting wild yeasts, Baker says, is an exercise in redundancy. In this case, he began with taking sterile swabs from different areas in the fermentation tank before adding them to jars of wort — unfermented beer — and covering them with cheesecloth. Then the cultures have to ferment for around three months before they can be tasted, but the majority of them never even make it that far.

“Most of them you don’t try because they just smell or look horrible,” he says. “Out of the 50, 55 (samples), four of them maybe had some type of fermentation going on. The other ones were moldy, or they smelled like tire fire or vomit or diapers.”

A few of the palatable samples tasted OK, Baker says, but one stood out above the rest. To find out whether it was viable for making beer, the cultures were sent off to Omega Yeast, a Chicago-based microbiology lab that supplies yeast to professional and home brewers.

“The odds of finding a brewer’s yeast was basically zero,” Baker says. The cellars had been sealed for decades, the equipment was out of use for even longer and the dank cellars had little light and limited sugar.

“Our only hope was that some yeast sporulated — where they form these really hard spores and then basically sit and wait and hope that they fall into sugar or sugar falls onto them,” he says.

Omega tested the samples and ran their genetic ID against other known strains of yeast. There were no matches. Not only had Baker and Morgan found a viable brewer’s yeast, but they had also harvested a previously undiscovered strain. That, Morgan says, is unprecedented.

Naturally, they made a beer out of it.

“It’s definitely not a beer you would’ve found in a bar in the 1850s, but the yeast really shines through,” Morgan says.

Urban Artifact is known for its collection of exclusively sour and fruited beers, but Baker took Missing Linck, the name given to the new yeast strain and the new brew, in an entirely different direction.

“It’s almost like a toned-down Belgian ale,” he says. “A little clove, a little bit of the estery characteristics. A touch of banana, a touch of bubblegum. All of that is toned down, and it’s got a really nice malt character. It is a little sweet on the finish, but that’s not uncommon for a yeast like this. We have a moderated hop-bitterness to help balance that out. ‘Rustic’ is a good way to put it.”

In November 2018 Urban Artifact released a pilot batch of Missing Linck and it sold out in a day. It was the nudge they needed to take the yeast a step further.

Instead of keeping the strain to themselves, Urban Artifact has given the yeast to the City of Cincinnati to be used by any and all local brewers. The city has declared June 1 Missing Linck Day and this year — and hopefully every year beyond — they’ll celebrate the history and future of their remarkable find with a Missing Linck festival.

Now, thanks to the team at Urban Artifact, Cincinnati has its own historic yeast strain.

After the F. & J.A. Linck Brewery closed, Morgan says, its old space was rented out to other Cincinnati brewers for a brief time during the Civil War. Those circumstances make it impossible to determine exactly where this yeast came from, but also capture the essence of what it means for the brewery to give a yeast so uniquely Cincinnati back to the city where it was hidden for so many years.

“Eleven of the biggest brewers in Cincinnati all shared this space at the same time, so this idea of the future of Missing Linck, it’s consistent with the physical past of this place,” Morgan says.

Just as the brewery from which it came, Missing Linck may one day fade into obscurity, but Baker is focused on its present potential. “It’s just a matter of time before it gets forgotten,” he says. “Eventually it will go away like everything does. But for this moment in time, for the here and now, I think we can have a pretty big impact. We found the needle in the haystack.”

For this year's Missing Linck Day on June 1, the brewery is celebrating by tapping a keg of the beer, displaying historic brewerania and antiques, hosting tours of the campus, leading guided tastings/classes ($20) with co-discoverer Morgan, premiering the film Wild Yeast and Missing Linck and more.

The keg will be tapped at 4 p.m. June 1, selling the beer in four-packs and on draft starting then. Everybody’s Beer Class costs $20 and includes a flight of beers selected by Mike Morgan and a pint of Missing Linck. Classes will be held at 4:30, 5:15 and 6 p.m., tickets are first come, first serve and limited to 20 per class. Get more event info here. Tasting and tour tickets here.