Café owner Daniel Noguera has added a twist to the traditional cortado, adding ice to the 50/50 split of espresso and whole milk that's usually served hot.

In light of the daunting summer heat, Pendleton’s Urbana Café is preparing to keep locals cool with a new, refreshing take on a year-round favorite. Urbana Café owner Daniel Noguera has taken the traditional cortado — a 50/50 split of espresso and whole milk served hot — and added ice to create his iced cortado. The iced cortado debuted on Urbana Café’s printed menu last week at $3.50, and Noguera has no intention of taking his icy creation off the menu anytime soon; it is expected to become a year-round product.

Maintaining that essential balance, the iced cortado has equal parts espresso and whole milk — Wooster, Ohio's Hartzler’s whole milk to be specific. While customers will have the opportunity to substitute the milk for other non-dairy options like coconut and almond milk, Noguera believes Hartzler Family Dairy offers the “highest standard of milk production,” making it a no-brainer for the iced coffee.

An avid coffee drinker and experimentalist, Noguera expects his iced cortado to follow the lead of its warmer Spanish relative, especially as the temperatures continue to spike in Cincinnati.

To encapsulate all of its flavor and versatility, the iced cortado will be served in its own glass designed by Noguera over the course of a three-month process. “We got a lot of samples,” Noguera says. “Some of them were a little too white; others were a little too common. We wanted something that was a little different compared to what you see elsewhere.”

Fitted with Urbana Café’s original logo, the sleek 8-ounce glass will play host only to Noguera’s iced cortado. The glass will also be available for purchase at the storefront located at 1206 Broadway Street. 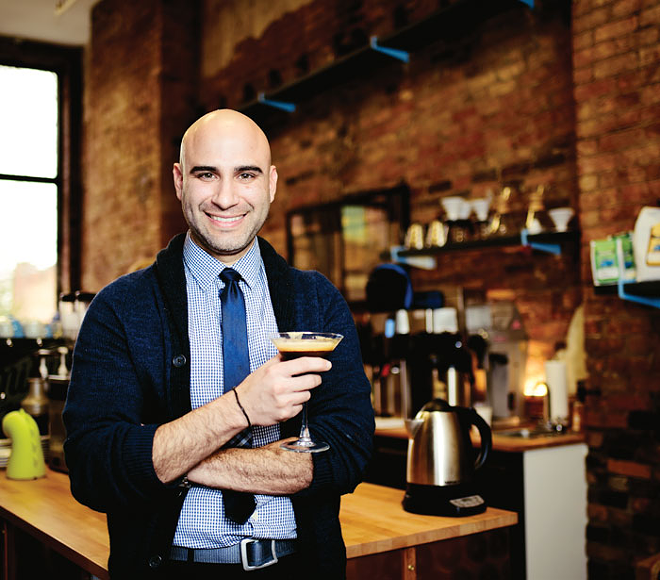 Both the drink and its glass derived from Noguera, but he knows he’d be nowhere near complete with either of the projects without his well-caffeinated team. Noguera asked his tight-knit group of employees to offer their input in all aspects of the iced cortado’s production, an approach that also led to the creation of another Urbana Cafè classic, the Caffe Frizzante.

A double shot of espresso paired with sparking water and a hint of lime served over ice, the Caffe Frizzante was expected to only last the summer after its release, but it won over too many Pendleton hearts to be kept off of the year-round menu.

It’s now the iced cortado’s turn to do the same.