It's the ultimate landlocked oyster celebration

The Washington Platform Saloon & Restaurant is transforming into a Midwestern oceanside retreat from March 29 through May 11 during its 33rd annual Oyster Festival.

More than 40 fresh and fancy (and kind of odd) oyster varieties prepared by chef/owner Jon Diebold and staff will grace the menu, including dishes like: 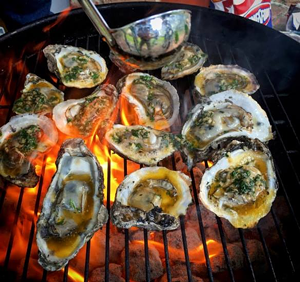 The festival also has its share of unique games and events including Oyster Roulette: a shared plate of fresh oysters in which one shell is loaded with "Dave's Insanity" hot sauce. Other events include the Pearl Count and the Pearls of Wisdom game for chances to win prizes including gift certificates, T-shirts and even a Reds weekend getaway.

All festival long, make sure to inspect your oysters for the ‘Big Red 33’ marked on the shells; lucky winners will receive a Washington Platform gift card for $33.

Certain days during the Oyster Festival hold more specials. After 5 p.m. on Tuesdays and Thursdays, Washington Platform is offering their ‘3 for 33’ deal where customers can purchase any three meals from the Oyster Munchies menu for $33. On Friday and Saturday nights, 9 p.m. to midnight, live Jazz will be played in the Canal Room. And a traditional New Orleans Jazz Brunch will be offered on the first and third Sundays throughout.

The 33rd anniversary party for the Oyster Festival is 4 p.m. May 4 featuring a giant oyster roast, with pit-roasted and barbecued oysters, special drink pricing and live music from the Buffalo Ridge Dixieland Jazz Band.

Dinner reservations are recommended but not required. More info: washingtonplatform.com.