Plus, Ben Carson cops an Eminem song for campaign launch (with a Gospel twist!) and a Russian politician says U2 violated Russian law with its homosexual propaganda

When a jury ordered Robin Thicke and Pharrell Williams to pay more than $7 million to Marvin Gaye’s family due to a resemblance between the pair’s “Blurred Lines” and an old Gaye classic (the pair are currently seeking a new trial), it was hard not think of the Bruno Mars/Mark Ronson hit “Uptown Funk,” which seemingly borrows the “feel” of about 200 classic Funk tracks. The tune’s songwriting credits added five more names recently when a claim was filed on behalf of The Gap Band that pointed out part of “Uptown Funk” was similar to the group’s 1979 song, “Oops Up Side Your Head.” Your move, Morris Day and the Time, Prince, Zapp, etc. “Uptown Funk” could have about 900 credited writers when all is said and done.

Dr. Ben Carson, a retired brain surgeon who thinks prison time turns people gay (proving homosexuality is a choice!) and that Obamacare was the worst thing to happen to the U.S. since slavery, recently joined the ranks of tone-deaf Republican politicians who use music in their campaigns by artists whose beliefs systems are the polar opposite. Carson announced he’ll be running for president at a campaign event in Detroit where he was joined by a Gospel choir singing Eminem’s hit “Lose Yourself.” (It admittedly is not that bad; see below.) Just weeks earlier during a radio interview, Carson railed against “the Hip Hop community,” saying it was destroying faith and family values. Perhaps Carson thought using a Gospel choir would effectively exorcize the demons from Hip Hop? And is it wise to use a song with “lose” in the title?

While many bitched about having a free album forced upon them, a Russian politician is reportedly demanding an investigation into last year’s U2 album giveaway through iTunes, saying Apple is guilty of spreading “gay propaganda” to minors, which is illegal in Russia. The politician is also said to be considering a lawsuit against Apple on behalf of his own son, all because the cover of the album, Songs of Innocence, shows U2’s shirtless drummer embracing his shirtless 18-year-old son (see below). That cover was not even included with the initial giveaway (it was revealed months later for the physical release of the album). If Apple is found guilty of corrupting minors with so-called gay propaganda, the company would have to pay a fine and would not be able to do business in Russia for up to three months. 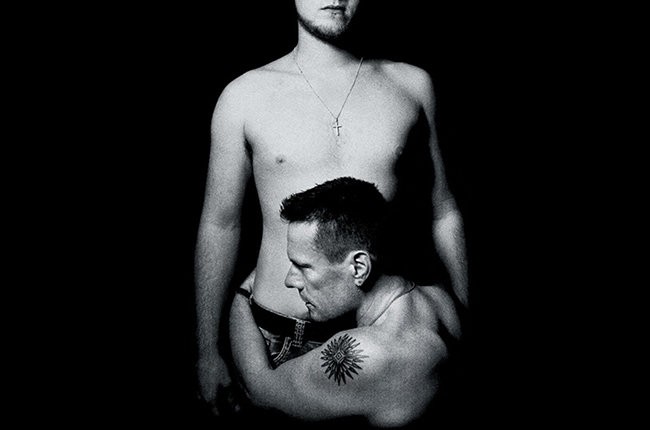