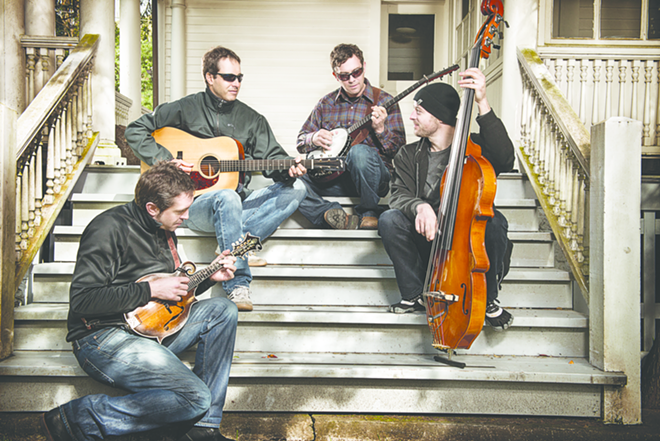 odern Bluegrass crew Yonder Mountain String Band is returning to Covington’s Madison Theater this week for yet another of its memorable and fun shows. When the band pulls into the area, however, there will be some different faces to see when it takes the stage.

Nope, there haven’t been any personnel changes within the ranks of Yonder Mountain. The boys are just in the midst of a bit of a baby boom.

Ben Kaufmann, Dave Johnston, Adam Aijala and Jeff Austin formed the group back in 1998. The last few years, though, have found Kaufmann, Johnston and now Austin bringing new life into this world in the form of adorable infants. Austin will be the only one of the four to not make the upcoming concert due to his impending arrival.

So, with this tour booked long ago, the three other members of Yonder Mountain decided to do the next best thing: ask Ronnie McCoury and Jason Carter of the award-winning Del McCoury Band to join in on the fun.

McCoury and Carter will not only perform with Yonder Mountain, they will also open the show with their own group, The Traveling McCourys. Austin is due to return to Yonder Mountain soon.

“Jason has played a bunch of shows with us,” Aijala says. “Ronnie always sits in, but he has never played a whole show. We’ve been sending him chord charts and music. We’re still trying to stick to our ‘no repeats’ (set list policy) in the course of a week, so he’s got a lot of stuff to learn. And, he knows it,” Aijala says with a laugh.

“We’re really going to stretch out, even on some stuff that we don’t normally stretch out on,” he continues. “We’re going to do some of the covers that Jeff sings, but we’re removing Jeff’s originals from our repertoire and that’s a lot of music. Jeff, especially early on, wrote a lot of the jammers. As for ‘song’ songs, as in regular songs, we have plenty. But, we only have an X number of jammers. They are finite. Even though it’s not going to be the Yonder Mountain that you know, because Jeff is a big part of the band, we’re still going to have stretched-out music.”

Asking McCoury and Carter to temporarily join the touring version of Yonder Mountain is a no brainer. McCoury is an eight-time International Bluegrass Music Association (IBMA) Mandolin Player of the Year and Carter is a four-time IBMA Fiddler of the Year who won the award again this past September. Both are currently up for a Grammy Award for Best Bluegrass Album for the Del McCoury Band’s latest effort, Streets of Baltimore.

“Those two guys have known each other a long time,” Aijala says. “Jason joined the Del McCoury Band when he graduated high school in 1991, so he has been playing with him for a hell of a long time. So, with those guys, their brains are linked. I have a feeling that it is going to be some really interesting music. There will be no shortage of fun or energy on and off stage. The Traveling McCourys will be opening, and it looks like (guitarist) Andy Falco of the Infamous Stringdusters will be playing the first eight shows with those guys. He’s a good friend of ours, too, and I love his playing. So, it will be great. There will be a lot of backstage picking and bus picking.”

A lot of younger Bluegrass and Newgrass pickers these days cut their teeth on Punk, Metal and Hardcore music in their youth. Aijala, who grew up in Massachusetts before joining Yonder Mountain in Colorado, did the same.

“I think there are a lot of similarities in the lyrics, even if it is not about the same material, (just in the) approach to the lyrics, in that they are very pointed and they say what they feel,” Aijala says about the similarities between Punk and Bluegrass. “And a lot of the music is high energy. A typical Bluegrass song is pretty short and a lot of Punk and Hardcore songs are short. And, like I said, you have these real direct lyrics.

“Generally with Punk, there is a jaded or pissed-off vibe about society and government. I’m thinking more like the Minutemen and the Dead Kennedys, and you can even go as far as Black Flag, whereas with Bluegrass it is more about heartache and heartbreaks and things like that. But there is still a similar feel.”

Greater Cincinnati has proven to be fertile ground for Yonder Mountain over the years, and the band members always enjoy their annual visits, though Aijala does recall hanging out after a gig in the pre-revitalized Over-the-Rhine neighborhood, when the members were spooked by the sounds of some nearby gunfire (“We’re like, ‘OK. Let’s go”).

“Love it,” Aijala says of Greater Cincinnati in general. “I love the Madison Theater. It’s great. One of my favorite restaurants in the whole country is right down the street, too, called the Riverside Korean Restaurant. That place is money! And, the owners of the Madison are always so nice and super sweet, and the crowd is always rockin’. They’re nuts. … Cincinnati and Covington are great and they’ve always been real good to us. As long as people keep coming, we’ll keep coming.”