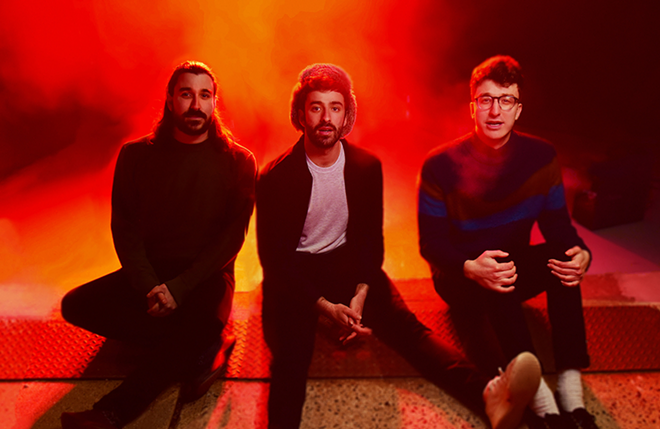 Big news for music fans (and for the slow and steady return to "normal"): Indie Pop trio AJR will play the outdoor stage at the Andrew J Brady ICON Music Center at The Banks (officially referred to as the ICON Festival Stage at Smale Park) on Tuesday, May 10, 2022. Tickets for the show go on sale at 10 a.m. April 16 at ticketmaster.com and iconmusiccenter.com.

Named after brothers/band members Adam, Jack and Ryan Met, AJR just released its fourth full-length — OK ORCHESTRA — in March. The self-produced project debuted at No. 10 on the Billboard 200. The sibling trio was last slated to play Cincinnati in May 2020 as part of their The Neotheater Part II tour. Obviously, COVID put the kibosh on that.

But to prep for the new concert date, you can listen to the band's latest single, "Way Less Sad," below.

The Andrew J Brady ICON Music Center on the riverfront is operated by MEMI (Music & Event Management, Inc.). And while it’s common for new sports/entertainment arenas to sell naming rights to companies or arts organizations to tag the name of a big donor onto a new venue, the 4,500-person capacity spot is named for a longtime Cincinnati music educator and musician.

The Andrew J Brady ICON Music Center — not the Carl Lindner III Music Pavilion or the LaRosa’s Pizzatorium — is named after a 1938 University of Cincinnati College-Conservatory of Music graduate, Andrew J. Brady. Brady went on to become the music director at Western Hills High School and a Jazz musician who worked with various youth programs over the years.

The ICON — featured in Billboard's list of 30 New & Renovated Venues To Watch In 2020 — was designed by architectural firm GBBN (check out renderings here).

The venue, located on land between The Banks and Smale Park near Paul Brown Stadium, is slated to host up to 170 events per year, both indoors and outside at ICON Festival Stage at Smale Park, which can accommodate up to 8,000 fans.

The ICON is located at 25 Race St., Downtown. More info at iconmusiccenter.com.