Hemlock Branch will be hosting an album release show for their self-titled debut album at Northside Tavern on Sept. 17. 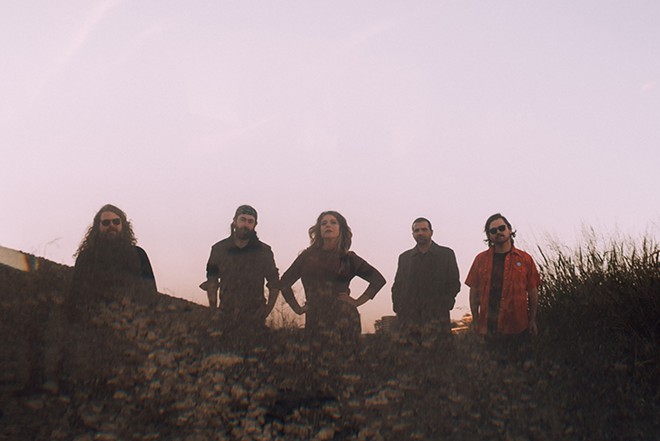 Venturing into Scott Simpson’s backyard is a bit jarring. Nestled behind Simpson’s unassuming neighborhood home is a mini oasis complete with a pond, three cats, cactuses and myriad plants and flowers. It’s a peaceful bit of suburban bliss that stands in stark contrast to Simpson’s previous musical outfit, local doom metal legends, Beneath Oblivion. But one need only listen to the self-titled debut album of his newest project, Hemlock Branch, released on Sept. 2, for it all to all make sense — namely an adoration for hidden beauty and organic growth.

Hemlock Branch initially began as a three-piece act, composed of Simpson (guitar and vocals), Derda Karakaya (bass) and David Howell (drums). “David and I worked together at Junker’s Tavern and hit it off and then we started jamming. Derda joined even before he even moved to the United States, because we were sending him rough recordings of what David and I were working on, so he kind of had it learned before he even came here,” Simpson explains.

Karakaya moved from Istanbul to Cincinnati in late 2019, completing the initial lineup, and the band was set to record a demo in early 2020 before the COVID-19 pandemic put the brakes on their plans. COVID-19 did allow the band to develop their goals more fully, namely sorting out who was going to sing on the record. Simpson initially didn’t want the mic duties and was the one to recommend Amy Jo Combs as vocalist, before agreeing to share the duties on Combs’ suggestion. Simpson’s former bandmate, Keith Messerle (synth and piano), came out of live music retirement to become the final piece of the puzzle. With the lineup completed, the band navigated “unprecedented times” to finally record what would become their debut album, with Combs and Messerle helping cultivate what Simpson, Karakaya and Howell had initially built.

What was built is not easily defined. There are heavy, metal-adjacent elements for sure — Simpson’s unique branch of unholy shrieks guarantees the album won’t be hitting the Pop charts anytime soon — but each track is layered in such a way that the band members’ multitude of influences are allowed to shine through. “In the band, everybody listens to everything so there’s no restrictions on genre. We can write whatever the hell we want,” Karakaya says.

Elements of classic rock, jazz, ambient synth and tons of other disparate sounds weave together in wholly unexpected ways. Often the individual instrumentation intertwines themselves and crescendo before falling back into the mix and giving another instrument a moment to shine. The mix of Simpson’s and Combs’ clean singing along with Simpson’s pained shouts function much the same way, with each vocal element often swirling amongst one another. This all adds up to an album that sounds much bigger and intricate than a five-person lineup would let you believe.

The lyrics also rely on a layered and elaborate approach to storytelling. Simpson based the lyrics on a very personal loss. “A lot of what influenced [the album] was a friend of mine’s suicide a couple years before; I hadn’t properly dealt with it. This has sort of been part of that healing process.” Simpson says.

While Simpson focused the writing on coping with a very personal loss and moving forward, the overall meaning grew beyond his ordeal to more universal trials we all face. Combs elaborates, “I felt like, thematically, it carried over to this world we were living in. Even though it had this heavy message, I felt like I could relate to that, but I could also relate to what was going on in the world at that point. People were struggling… I don’t think I couldn’t have connected to the songs at that point unless I really felt the message behind it.”

While the lyrical content and the circumstances under which the band come together are undeniably dark, Hemlock Branch has been able to craft an album that is surprisingly hopeful. Rather than fall into genre tropes, the group let their output grow beyond conventions into a surprisingly invigorating record. “It felt like a pet project that turned into a passion project,” Messerle says. Simpson agrees, saying, “[The album] is very refreshing to me. It’s like a breath of fresh air.”

For a band whose members have experience in everything from thrash metal to indie and everything in between, to come together under a singular banner is rare enough. To have them come together during a time when most bands took a break or fell apart and come out on the other side with an accomplishment such as Hemlock Branch, is downright unheard of. Hemlock Branch did just that though, by taking the chance and using a painful impetus, allowing it to flourish, and letting it turn into something beautiful. It may be tucked away, like Simpson’s garden, but once you find it, you’ll be eternally grateful that you did.

Hemlock Branch will be hosting an album release show for their self-titled debut album at Northside Tavern on Sept. 17. Doors open at 8 p.m. and the show starts at 9 p.m. More info: facebook.com.