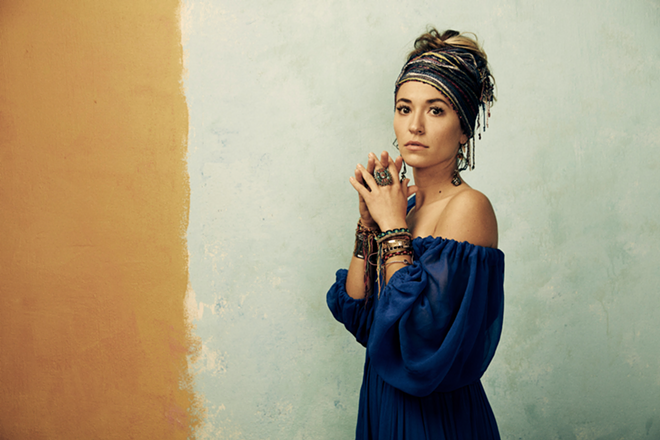 Photo: Jeremy Cowart
Lauren Daigle
One thing Lauren Daigle has learned about performing live is that it’s OK to relax a bit and go with the flow onstage.

“I was just talking to a friend about how in the very beginning you get caught up in trying to get it right,” Daigle says, looking back on when she first began performing. “There’s this feeling of, ‘I have to do it right. I don’t want to fall flat on my face.’ And you learn that actually mistakes and those kinds of moments are some of the purest and most beautiful moments on a stage… I think I’ve learned how to face those moments and run with those moments.”

The ability to embrace spontaneity and the occasional happy accident should work in Daigle’s favor as she tours to promote her newly-released second album, Look Up Child. She’s bringing out a big band to help recreate the more organic sound of the new music, and the interplay she wants to see on stage is likely to generate one-of-a-kind moments that won’t necessarily be the product of planning or perfect execution, but of honest communication, expression and perhaps that unintended mistake that somehow enhances that show.

“My goal for this (show) was I want to sweat at the end and I want a band that talks to each other with instruments, plays with each other with instruments and doesn’t rely on (backing) tracks to be the thing that drives the sound,” Daigle says. “So we completely reorganized everything and now there’s going to be 10 people onstage, which is completely new — so new. But to get some of the fullness of the sound requires more people. I’m excited, I’m so excited.”

She has even more reasons to be excited lately. Though Look Up Child was expected to do big numbers in the Contemporary Christian music market, where she is a superstar, when it was released on Sept. 7 and debuted in the No. 3 slot on Billboard’s all-genre album chart — coming in just behind the latest from superstars Paul McCartney and Eminem — many in the music industry seemed surprised. Big music press outlets have been taking notice, comparing her soul-drenched voice to Adele and Amy Winehouse. Look Up Child seems well on its way to making Daigle a crossover star. After the debut, she told Rolling Stone, “I’m inspired to see music continue to cross-pollinate through genres.”

The more natural, less synthetic live sound Daigle is presenting is very much an extension of the direction she pursued on Look Up Child. It makes sense for the Louisiana native, who relishes the old-school approach she heard in the music of New Orleans and elsewhere in the state.

“It’s such a rich culture of music — of Jazz and Zydeco and so much (more),” she says. “You can be on a street corner listening to a band that’s blowing your mind. They don’t have (prerecorded) tracks.”

Now 27, Daigle has been singing her entire life, but threw herself deep into music after she overcame a serious auto-immune condition as a teenager that kept her home-bound for two years. Hoping to break into the business, she tried out for American Idol, first in 2010, where she just missed making the field of 24 finalists, and then again in 2012, where she was cut in the first Las Vegas round.

Daigle didn’t have to wait that long for her next break, though. After being asked to sing background vocals on an EP by a band called The Assemblie, both the group and Daigle were invited by Christian music record label Centricity Music to attend a workshop. She ended up filling in for the singer of The Assemblie (who suffered an attack of appendicitis) at the workshop’s main event and, in 2013, Daigle was signed by Centricity.

Following a successful EP release, Daigle’s debut album, How Can It Be, debuted at No. 1 on Billboard’s Christian albums chart when it was released in 2015. The album went platinum and cemented Daigle’s status as one of the fastest-rising newcomers in Christian music history.

Instead of jumping right into working on her second album, Daigle decided she needed a break to figure out who she was and what experiences and stories should inform the new songs.

“I went home, back to Louisiana, and just kind of stepped away from music,” she says. “I took about six months off to kind of re-find myself, go back into normal day-to-day life and see my old friends, see some family, get rooted again. I needed a season of rest, because I was touring so much (and) I didn’t want to write a record from a place of burnout. So I ended up going home, got refueled and then that’s when I knew, ‘OK, it’s time to do this again.’ ”

In recording the songs with songwriter/producers Paul Mabury and Jason Ingram, her main collaborators from the first album, Daigle started moving away from synthetic elements, opting to use real instruments — including strings or horns — to help create a more organic setting for her rich, soulful vocals and inspirational lyrics. Much of the Look Up Child album is weighted toward ballads, such as “Rescue,” “This Girl” and “Love Like This,” which swell to lush, string-laden crescendos. But there is also “Still Rolling Stones,” a punchy rocker, and the sprightly “Your Wings,” which has a Reggae-ish feel.

In the wake up Look Up Child’s huge early success, Daigle’s current headlining tour represents a whole new adventure. Just as she switched up her approach to recording, Daigle’s current show is completely different from the last time she toured.

“We’ve pretty much changed everything,” Daigle says. “The start is going to have some old, a couple of old songs, and then a lot of new songs and some covers of songs that impacted the making of this record. So it’s a hodge-podge of a little bit of everything.”