There’s a good chance listeners will think Homemade is one of the best local albums of the year, and Gabbard’s avowed influences like The Beatles and Beach Boys are in clear evidence.

Whenever Greater Cincinnati Rock band the Buffalo Killers does press interviews, bassist/vocalist Zach Gabbard typically takes the lead. But now that guitarist/vocalist (and Zach’s brother) Andrew Gabbard is set to release his first solo project, Homemade, it’s his turn in the promotional spotlight.

So how does it feel being the carnival barker directing people into your personal Rock & Roll tent?

“It’s cool. I like talking about stuff,” says Andrew with an easy laugh. “It’s nicer when I have my big brother to do all the work, but it’s fun because a lot of this interview stuff is new to me. But you know, if I asked him, he’d probably do it for me. He’d do whatever I needed him to do. He’s a good brother.”

The Gabbards have been making music together since the 1999 formation of Thee Shams, and in every one of their subsequent musical iterations — i.e. the Buffalo Killers and the freshly minted Gabbard Brothers — the songs have always been credited to the Gabbards collectively. Homemade makes a fairly potent case for Andrew being the Pop/Rock influence in the Gabbards’ songwriting equation, so it begs a natural question: Why is this the right time for a solo project?

“I don’t know,” Gabbard says. “I’ve always written and recorded a lot, but I’ve never pursued anything or shopped around to labels. We were working on a different album that was finished, and during the pandemic, I was recording a bunch of songs on a new set-up I’ve got and the primary focus became the newer songs. It just sort of happened.”

“I don’t know if there’s ever a right time, but it just seems to be the time for it,” he adds. “I’m feeling pretty good about it. I’m ready to release it and see what everybody thinks.”

There’s a good chance listeners will think Homemade is one of the best local albums of the year, and Gabbard’s avowed influences like The Beatles and Beach Boys are in clear evidence. “Wake Up, Brother,” the album’s lead track, has the pianocentric melancholy of a Brian Wilson lullaby and a lyric that nods serenely to the tumultuous couple of years we’ve all endured (“We are 2021, kiss the one you love if you’re still here/One thing I know moving on, never take another second for granted...”). That’s followed by “Instant Trancer,” a Beatlesque tune that Cincy Rock icon Rob Fetters would be proud to call his own.

“While I was recording this, I had fallen into an annual Beatles obsession, and about the same time, my kids were discovering the Beatles,” Gabbard says. “(The Beatles were an influence) but also the Beach Boys and Neil Young. Those are some of my favorites. When I was trying to dial things in, I would listen to the White Album and try to pick out how Ringo had his drums. I’ve always wished I could sound cool like that in my recordings, so I do my best.”

Another influence that looms large for Gabbard is slightly more obscure: Midwest-born/California-based Emitt Rhodes, who was once dubbed “the one-man Beatles” back in the early ‘70s. Gabbard was clearly drawn to the late Rhodes’ work through their mutual love of the Fab Four, but also because Rhodes was a home-recordist and multi-instrumentalist. Rhodes was the primary influence on the closing track on Homemade, the jaunty and reflective “Promises I’ve Made.”

“I always gravitate toward artists where I think, ‘I could do this. I can hear how he did it,’” Gabbard says of Rhodes. “I really relate to him. That was how the whole album started. On the day he died, I recorded ‘Promises I’ve Made’ and sent it to Terry (Cole) at Colemine Records. That was the first recording I did on my new set-up and it kind of snowballed after that.” 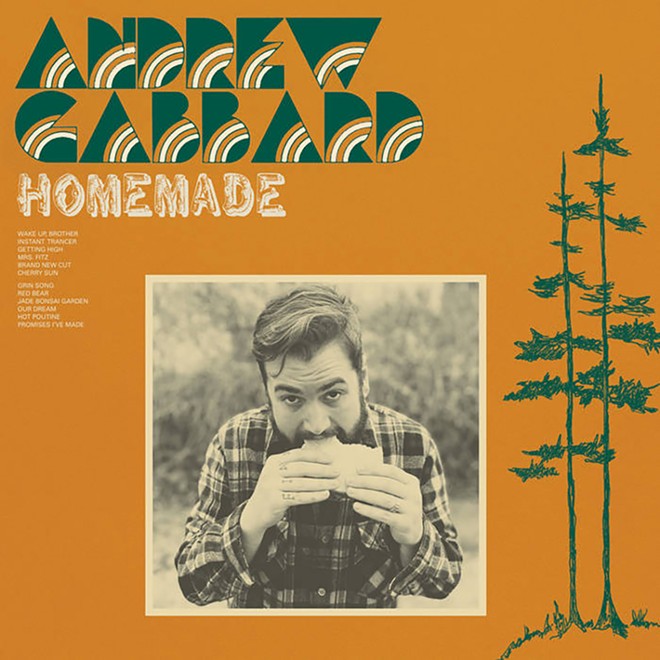 Homemade is being released on Karma Chief, an imprint of Cole’s Colemine Records label, based in Loveland. Cole’s Plaid Room Records store carries a wide variety of local artists’ material, and Zach Gabbard is a frequent visitor to the store on his rounds to restock retailers with the Buffalo Killers catalog. On one such visit, Cole inquired into the brothers’ current activities, specifically what Andrew was working on.

“He told Zach that he really wanted to get in touch with me because he liked some of the stuff I had online,” Andrew Gabbard says. “So my brother gave him my number and we just started talking. He’s a good friend now and, like I said, I’m always writing and recording and whenever I do, I send it to Terry to see what he thinks.”

Like his hero Rhodes, Gabbard created everything for the album on his recently acquired MacBook, playing all the instruments himself other than pedal steel, which was provided by Buffalo Killers guitarist Sven Khans. Recording at home during the pandemic offered some interesting challenges, which Gabbard cherishes.

“My favorite part of recording is the hidden sounds of my kids yelling at each other or running by the drums while I was recording,” he says. “I recorded this last year, but even now, their voices have changed so it’s a cool little time capsule. I’ve talked about this a bunch, but I feel like your imperfections are your vibe. The more time goes on, the more you like the quirkiness of whatever you did. There’s a few songs where I forgot to take the cover off the mic on the drums, so it sounds a little unique.”

Beyond a few private shows and a release event at Plaid Room in Loveland, Gabbard’s plan is to lay relatively low until everyone can be as safe as possible during the ongoing pandemic.

“I’ve got a band and we’re playing the songs, but we’re strategizing a way to approach it differently for now,” Gabbard says of performing songs from Homemade. “I’m small potatoes. I don’t want anyone to feel uncomfortable or put anyone in danger (at a concert). We’re going to do some stuff and film it, then it will last forever. Eventually, we’ll get back to it when it’s a little more normal feeling.”

There’s a lot in the pipeline until then; the Gabbards and Buffalo Killers drummer Joey Sebaali have recorded a new album as the Gabbard Brothers — they released a new single titled “Too Much To Feel” last year — which will be released next year. There’s also a Buffalo Killers B-side album in the works, as the brothers contemplate shelving the band name in favor of their new identity. Plus the Gabbards will be hitting the road next summer in their roles as touring musicians for the Black Keys.

Gabbard addresses a number of lyrical subjects on Homemade, including the shameful treatment of Indigenous people in this country (“Red Bear”) and the curtailing of his longtime love of marijuana (“Getting High”). It’s not difficult to find veiled (and not so veiled) references to the pandemic in Homemade, so it’s tempting to think of it as a lockdown album, but Gabbard doesn’t necessarily see it that way.

“I think the album would have happened either way,” he says. “The pandemic just kind of sped it up. Some of the subjects may have been different had it not been going on, or maybe so. Everything happens for a reason, and that’s just what was going on. I just escaped into recording.”