Plus, Cincinnati's own Walk the Moon will head the lineup at this year's MidPoint Music Festival. 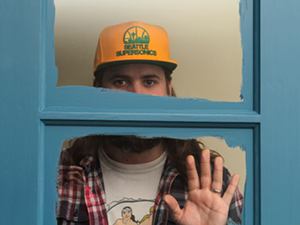 Photo: Pavement PR
Andy Gabbard
Though still retaining its earthy Rock & Roll base, the melodic prowess in the songwriting of Buffalo Killers — one of Greater Cincinnati’s finest bands of the past decade — has grown more evident with each album release. A key component to that appears to be band member Andy Gabbard, whose solo work is some of the finest, classics-informed Pop Rock being made today.

Gabbard’s debut solo effort, Fluff, was a bash-and-pop masterpiece of buzzing, distorted guitars and unforgettable melodies, but his soon-to-be released new effort, Plenum Castle, takes an even deeper dive into Pop, showcasing the multi-instrumentalist’s gift for crafting brain-burrowing hooks on a broader scale. If Father John Misty can crossover to the mainstream Pop world and get calls to write for artists like Beyoncé, it might be wise for superstar producers to consider putting Gabbard on retainer, stat.

After the release of Fluff (on which he played all of the instruments), Gabbard’s songwriting workouts via home-recording projects began surfacing on his Bandcamp page (andygabbard.bandcamp.com). He seemed to be pushing himself as a writer and challenging himself to see if his work transcended the guitar-bass-drums format. One of those projects that was perhaps most revealing was Andy Butchers The Beach Boys, a personalized five-song EP of Brian Wilson covers so deft Wilson himself gave his stamp of approval, which, for someone interested in Pop music’s intricacies and potential, has to almost feel like being knighted. At the very least, it had to be immeasurably encouraging. Covering Pet Sounds songs well is an almost impossible task, accomplished only by someone who has acquired a real understanding of Wilson’s compositional thinking. As Wilson’s approval attests, Gabbard’s versions on “I Just Wasn’t Made for These Times” and “Don’t Talk (Put Your Head on My Shoulder” are among the best ever attempted.

Plenum Castle is due July 14 from the Alive NaturalSound label, and the two tracks released so far are indicative of Gabbard’s invigorating creative capacities. The smooth rocking, keys-driven “Juice” flows like a soulful Harry Nilsson gem, while “Impossible Girl” is a straight-up Synth Pop jam. Both tracks are intoxicatingly melodic, possessing the kind of timeless nature for which many songwriters strive but few ever reach.

Gabbard (who’s now based out of Dayton, Ohio) has been gearing up for the new album’s release with shows throughout Ohio with his live band, Grape Whizzer. This Saturday, they’ll play a free album-release show at MOTR Pub (1345 Main St., Over-the-Rhine, motrpub.com). Nashville’s Skyway Man kicks off the night at 10:30 p.m.

Walk the Moon to Play MPMF

The first batch of performers for this year’s MidPoint Music Festival has been announced, as well as a few significant changes. The event returns Sept. 23-24.

Heading up the lineup is Cincinnati’s own Walk the Moon, which is working on its anticipated follow-up to hit album Talking Is Hard (featuring the huge single “Shut Up and Dance”). The band recently previewed new material at a festival appearance in Chicago.

Last year, MPMF’s first under management of Music and Event Management Inc. (or MEMI), the fest was moved from a collection of clubs and outdoor stages to all outdoor stages in a consolidated area of Over-the-Rhine. For 2017, MPMF is going downtown, moving to the area surrounding Taft Theatre, with shows being held at the Taft (and in its Ballroom), the nearby Masonic Cathedral and on an outdoor stage on Fifth Street at Broadway. The event is scaled back to two days (previously it has been held over three), but there will be a special kickoff concert on Sept. 22 (details TBA).