Singer/songwriter says the 'Poison the Parish' title comes from his opinion that "the preachers of society these days are the Kardashians and the Real Housewives of this and that." 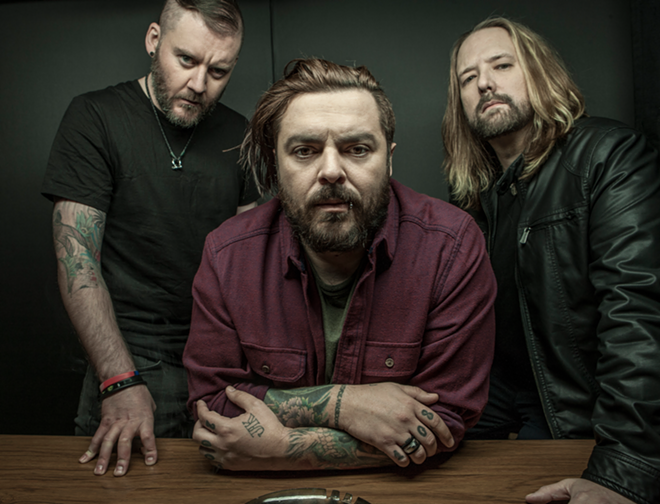 Photo: Marina Chavez
Seether
Shaun Morgan, frontman of Seether, sounds more content and enthused — and maybe even self-assured — than at any time since the early years of his group’s 15-year recording history.

“The whole thing is I was in a really bad place for about 10 years, and I came out of that about a year and a half ago, closing in on two years,” the singer/guitarist says. “So I’m in a different space, headspace, as a person and I’m in a different headspace just as a human being in general, and as a musician and as the guy that runs this whole show.”

Morgan didn’t delve into the sources of his problems, although a few difficult events are public knowledge, including the suicide of his brother, his breakup with Evanescence singer Amy Lee, a stint in alcohol rehab in 2006 and some band and music industry disagreements. Morgan said there was no specific thing that got him out of his doldrums.

"You know, you just wake up one day and decide enough is enough,” Morgan says. “And it’s as simple as that. It’s about wanting to make a change, and that’s kind of what I did.”

Morgan’s improved outlook is worth noting because it had direct effects on Poison the Parish, the most recent Seether studio album. It allowed Morgan to be more focused in his songwriting, gave him the clarity to know the type of music he wanted to create and helped him feel comfortable taking the helm for the first time as producer.

“I wanted to produce the album because I felt I had learned enough from the four producers we had used in the past — learned from one in particular, Brendan O’Brien — all the things that I wanted to do. And then I learned from the other (producers) what sort of things I didn’t want to do,” Morgan says. “That’s in no way meant to sound arrogant or conceited. It was just that I had learned enough.

“Really all I needed was a good engineer to help make (the songs) sound great, and I enlisted Matt Hyde. He’s a great engineer. So I knew with him I could get the sounds that I wanted. And we did.”

Morgan also took complete control of the songwriting on Poison the Parish. Though he’s always been Seether’s primary songwriter, there were times (especially on the 2011 album Holding Onto Strings Better Left to Fray) when Morgan invited collaboration from his bandmates. But this time he felt he needed to keep the songwriting to himself.

“I had far more focus on everything I was doing,” Morgan says. “So as I was writing, I really wrote specific parts on drums and bass and guitars and vocals. All of it was carefully thought out. It wasn’t just sort of bang some things together and hope for the best. It was a nine-month process from the first note being written of the demo to the last note of the demo. Because of that, there was a lot more time for me to get it to be just the way I wanted. I mean, I sat in my house and I spent months and months and months and months in a darkened room writing music.”

What Morgan also knew well before he got to the studio with the other members of Seether (bassist Dale Stewart and drummer John Humphrey) was that he wanted to make an album that would be loud, rock hard and capture the sound he’d always envisioned for Seether, but had not quite realized on the band’s five previous studio albums.

“I had found with the past few albums (I was) quite frustrated with the mixes and with the way we had been portrayed on the sonic side of it,” Morgan says. “I didn’t feel like we’d actually ever really been able to make an album that was really, truly guitar-heavy (and) that got the heaviness of our band. And I also wanted it to be a little bit more chaotic. I think it’s the best thing we’ve ever done, and I certainly think it’s the best sounding album we’ve ever created because of the fact that it completely represents who we are as a band.”

While the melodic sensibilities that have helped make Seether’s albums accessible is still present, Poison delivers more wallop, especially on songs like “Something Else,” “Stoke the Fire” and “Saviours,” which come with thundering drums, thick guitars and plenty of intense energy. The songs that dial back on the tempo are still plenty taut.

If the process of making Poison the Parish was overwhelmingly positive, the same can’t be said for the lyrics on the album, some of which take sharp aim at the rise of celebrity culture in the internet age. Morgan didn’t hold back in expressing his extreme dislike about the situation.

“The Poison the Parish title comes basically from my view that the preachers of society these days are the Kardashians and the Real Housewives of this and that and 16 and Pregnant and all of that crap,” Morgan says. “I think that they preach to the youth that it’s OK to be like that and it’s OK to be a vapid, contribute-nothing-to-society celebrity, and that’s basically where it started. A lot of the lyrics are about that.

Morgan hopes Seether has proven its worth by making music throughout its career that’s been honest and has had lyrical substance. Certainly, the group’s music has spoken to a sizable audience, being one of the most consistent hit-making acts in Hard Rock since its 2002 debut. The band has had dozens of high-charting singles, including “Remedy,” “Fake It,” “Rise Above This,” “Words as Weapons” and a multi-format hit cover of Wham!’s “Careless Whisper.”

Seether has spent much of this year on the road touring Poison. The shows have featured improved visual production and a notable addition to the touring lineup — guitarist Clint Lowery of Sevendust.