As a new Soundgarden album looms, Chris Cornell hits the road for another solo acoustic tour

Last year's "Higher Truth," which Cornell is currently touring behind, reaffirms that his songwriting is strong enough to stand up in the spare acoustic format. 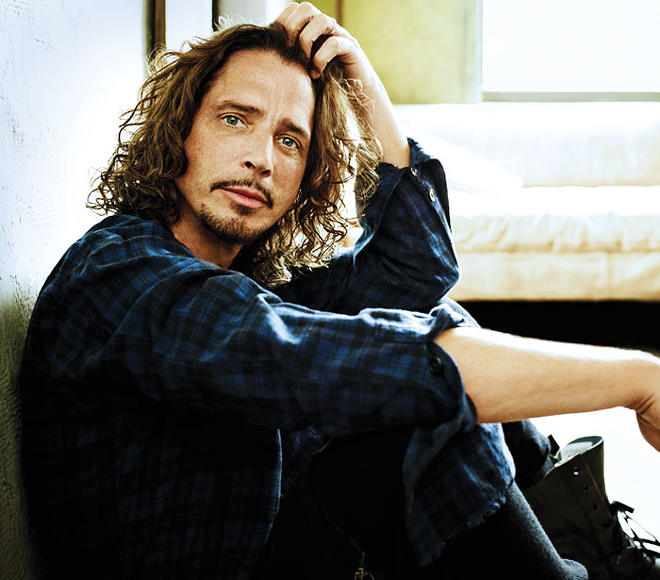 Many people associate Chris Cornell with big-riffed, fully plugged-in, wall-shaking Hard Rock thanks to his role as a singer in Soundgarden and Audioslave. But as a solo act, Cornell has put himself in an almost polar-opposite musical setting, performing tours acoustically.

Cornell documented his acoustic performances on the 2011 live album Songbook.

“The Songbook tours, that’s really sort of all bets off, 30 years of Chris Cornell songwriting in context, before (being in) any band, distilled into a guy standing in front of you with an acoustic guitar, singing and playing,” Cornell says. “It’s kind of done what I hadn’t been able to do in any other way. It’s connected the dots between all of my bands and all of my different projects and all the different periods of my career under one umbrella that makes perfect sense. That’s sort of what did it. I wasn’t thinking about that necessarily when I started out, but after the first North American tour, when I got done with that, I felt like, ‘OK, this is sort of who I am. This incorporates everything I’ve ever done, but it doesn’t sound schizophrenic when it’s in this context.’ ”

Having found his acoustic tours so satisfying and enjoyable, Cornell decided the next logical move in his solo career would be to make an album in the sound and spirit of the acoustic shows, which he did with last year’s Higher Truth.

“I wanted to write new material that specifically was written for that (acoustic format), almost in respect to that, or out of respect to that,” Cornell says. “Like this deserves to have its own record, its own voice. And that’s what Higher Truth became.”

Doing an acoustic album, though, did present some questions about how the format would translate to the studio. Cornell and his producer Brendan O’Brien (known for his work with Bruce Springsteen, Pearl Jam and many other high-profile Rock acts) had some give and take on the parameters of the project. One reason Cornell selected O’Brien for the project was because he knew he would be great at recording his vocals — a big issue on an instrumentally spare album featuring one of the most powerful vocalists in all of Rock.

“Brendan is kind of one of the only guys I’ve met in my 30 years that I trust (recording vocals),” Cornell says. “He just can do it. And not only can he do it, but he gets that extra 20 percent better than I could ever do on my own.”

What Cornell had to settle was whether he and O’Brien had the same vision for how everything besides the vocals would sound.

“My only question really was the idea of keeping it small, the idea of it not sounding like a band,” Cornell says. “My first concern was I knew he was going to be reluctant to strip things down entirely to just singing and an acoustic guitar.

“He said ‘I love your demos, I love your songs. I love the idea of making an acoustic record, but I’m scared of the idea of it just being singing and one acoustic guitar. But if you’re open to adding different textures and different things here and there to just kind of keep the songs going, then I think we can make a great record.’ Then he also said, ‘I don’t think anybody but you or I should play on it. I think that will keep the innocence of the album sort of where we want it to be and keep it sort of with the feel of the demos.’ And that was it.”

Cornell says he and O’Brien followed through on those intentions, and Higher Truth turned into exactly the album he had envisioned.

“Then there’s a whole bunch of other bonus stuff. His bass playing, for example, the way we kind of did it was, I would play the guitar of the song, he would play bass underneath that and then I would sing it. And that would be sort of the basic song. Then we would start trying to add things to where we thought they might need to be. But his bass playing was amazing. It just really elevated everything, and created a scenario where it didn’t really need so much else.”

What Higher Truth reaffirms is that Cornell’s songwriting is strong enough to stand up in the spare acoustic format. Most of the songs are augmented by judiciously chosen additional instrumentation, such as orchestration, washes of synthesizer or — as on “Nearly Forgot My Broken Heart” — an electric guitar solo. But Cornell’s vocal melodies and singing are the stars of virtually of every song.

Besides supporting Higher Truth on the road, Cornell has also been working on a new Soundgarden album, which figures to be released later this year.

One of the early Grunge bands, Soundgarden broke through to massive commercial success with its fourth full-length album, 1994’s Superunknown. But after one more album, 1996’s Down on the Upside, the group disbanded. Cornell went on to release his first solo album, Euphoria Morning, in 1999 before joining the supergroup Audioslave, which also included Tom Morello, Tim Commerford and Brad Wilk of then-recently disbanded Rage Against The Machine. Audioslave lasted three albums before splitting. Cornell then resumed his solo career, releasing Carry On in 2007 and Scream, which generated criticism for its electronic musical setting, in 2009. In 2010, Soundgarden regrouped, playing that year’s Lollapalooza. They then released a strong new studio album, King Animal, in 2012.

A new Soundgarden album may be on the horizon, but Cornell will be busy touring behind Higher Truth through July. Cornell says he’ll have a cello player to join him on a handful of songs, but otherwise it will just be him on stage. He doesn’t use a set list, but plans to play not only some Higher Truth songs, but also other material that didn’t make earlier Songbook shows.

“(I’m) going to be trying to go sort of deeper catalog, doing some songs that were written for different bands at different points in my life that I haven’t done yet,” Cornell says. “Some of that is based on requests that I see online or I’ve seen during shows. (I’m) wanting to do as much of (Higher Truth) as I can get away with, seeing how well that works, and (then) wanting to bring in cover songs I’ve never done before, some of which is also based on requests I’ve seen or just weird ideas I’ve had.”