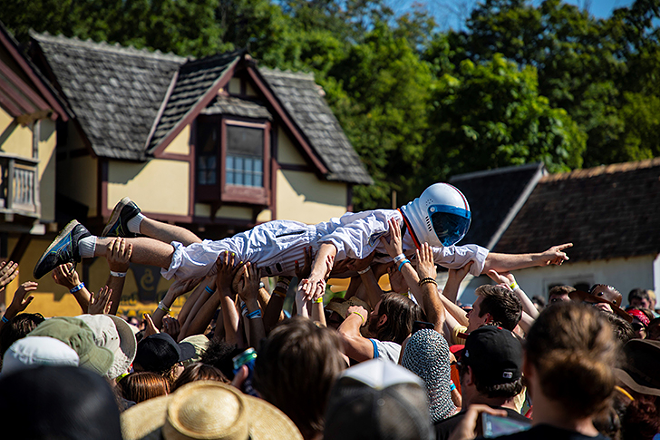 The Bellwether Music Festival (and its producer ESK Presents), Country Fest music festival and Mark W. Miller — an "Ohio citizen" and potential concertgoer — have sued Dr. Amy Acton in her former capacity as the director of the Ohio Department of Health, along with the Warren County Health District and Stark County Combined General Health for violating both their First and Fourteenth Amendment rights.

The lawsuit was filed June 11, before Dr. Acton resigned from her position at ODH that afternoon.

Bellwether, which takes place in Waynesville, Ohio, was scheduled for Aug. 6-8, 2020 and had pivoted to an Americana focus this year. This week, the music fest officially canceled the year's fest due to COVID-19. “The safety and health of our guests, artists, partners, and staff are always our first priority,” said Bill Donabedian, Bellwether Music Festival co-founder, in a release.

Country Fest — as the name would suggest — is a multi-day Country music festival held outside of North Lawrence, Ohio. So far, this event is still on. And Miller, the other party in the lawsuit, is just a guy who other media outlets have identified as the same Miller and COAST anti-tax activist involved in the Gang of Five Cincinnati City Council text scandal lawsuit.

You can read the whole lawsuit here, but essentially it claims that, among other things, Dr. Acton's "arbitrary and ad hoc" orders, which still currently ban mass gatherings like music festivals, are overreach and extend beyond her legal capacity as director and veer into the territory of unconstitutional.

Bellwether says that her orders would prevent concertgoers from being able to "fully and robustly engage in or enjoy the musical and related activities that occur as part of the Bellwether Music Festival." The suit also claims that if they had to cancel the event as a result, they would lose hundreds of thousands of dollars and that they have already spent $400,000 on booking performers.

For Miller's part, the suit says:

"MARK W. MILLER desires to attend and camp at the forthcoming Bellwether Musical Festival so as to enjoy the three days of musical entertainment and activities, as well as engaging in the interactive communication that occurs with others in attendance.

The lawsuit also says other First Amendment gatherings have been allowed to take place, including protests over the murder of George Floyd at the hands of police. The suit seems to draw many parallels to worldwide protests over police brutality and systemic racism and humans' inherent right to enjoy Americana music in a converted Renaissance village in Waynesville, Ohio.

“There is no difference between a large crowd gathering in the downtown of a large Ohio city to hear speech from speakers versus a large crowd gathering at Renaissance Park or Clay’s Park Resort (or at other venues) to hear speech in the form of music and other entertainment," Curt Hartman, attorney for Finney Law Firm — the one representing all three plaintiffs — told Fox19. “Yet, Amy Acton has, through her decrees and actions, explicitly allowed and condoned the former while prohibiting outright the latter. Furthermore, Amy Acton has decreed and permitted amusement parks (including King’s Island and Cedar Point) to open and operate wherein musical performances also take place and are allowed to occur.”

And here is the Fourteenth Amendment violation (no state shall "deprive any person of life, liberty or property, without due process of law") claim:

"The extreme scope and length of the decrees and actions of AMY ACTON is of such a nature so as to infringe the liberty protected by the Due Process Clause of the Fourteenth Amendment of the sponsors, organizers, producer, performers and those in attendance at or who desire to attend the Bellwether Festival or The Country Fest, including MARK W. MILLER."

The festivals want the decrees and orders of the Ohio Department of Health preventing mass gatherings to be declared invalid so people can enjoy their First and Fourteenth Amendment rights at Bellwether and Country Fest. The fests also want to receive at least nominal damages and other relief.

The suit was filed in the United States District Court for the Southern District of Ohio.