Buckethead — One of the Best, Fastest and Weirdest Guitarists on the Planet — Plays Bogart's May 17 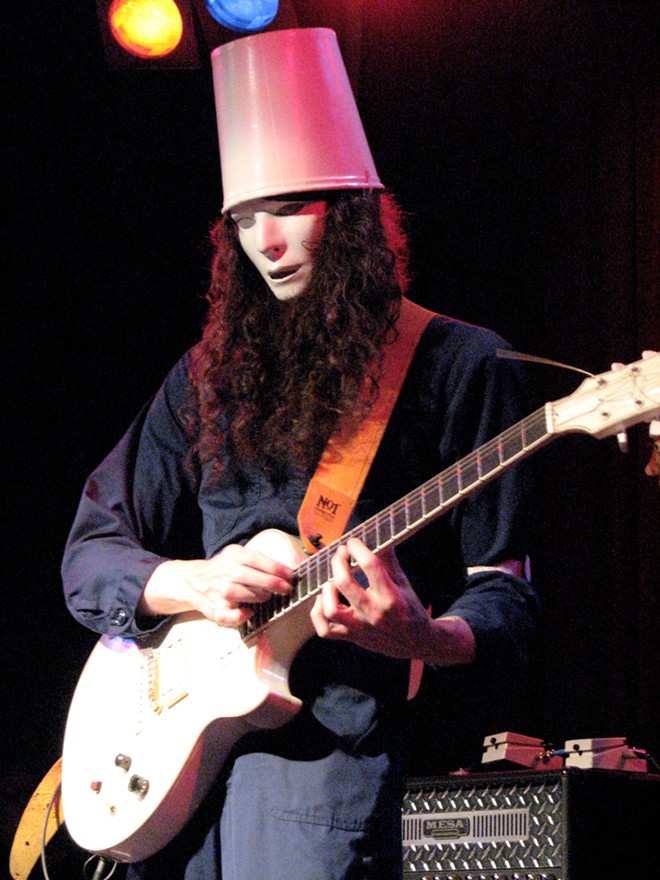 Talk about truth in advertising: When Brian Patrick Carroll was 19 and already an accomplished guitarist, he stuck a Kentucky Fried Chicken tub on his noggin, slapped an emotionless white mask over his face to shield his identity, looked in a mirror and said, “Buckethead.”

Thus was born one of the most inventive and uniquely talented guitar shredders, a player who routinely shifts between Funk, Metal, Prog, Blues, Ambient, Bluegrass and experimental Art Rock and has been cited by numerous publications and august organizations as among the best, fastest and weirdest guitarists on the planet.

At age 12, Carroll began taking guitar lessons from an elderly neighbor but didn’t take the craft seriously until his family moved to Claremont, California, which led to private lessons from a variety of gifted teachers, including former Mr. Big/Racer X guitarist Paul Gilbert. As his playing improved, he documented his performance and songwriting progress by recording home demos. According to Buckethead lore, his alter ego emerged after being inspired by Halloween 4 to buy a blank mask, à la Michael Myers, and a KFC dinner that same evening.

After playing in a couple of bands, Carroll adopted his Buckethead persona and entered a song in a Guitar Player magazine competition, earning an honorable mention. In 1991, the 21-year-old was invited to contribute to avant guitarist Derek Bailey’s Company, resulting in his appearance on the collective’s Company 91 album. The following year, Buckethead’s profile rose exponentially; he released his debut album, Bucketheadland, early in the year, and formed Praxis with Bill Laswell and Bootsy Collins, among others, dropping their acclaimed debut, Transmutation (Mutatis Mutandis), later in 1992.

Over the subsequent three decades, Buckethead has provided music for film and video game soundtracks and aligned himself with a number of band projects (including Colonel Claypool’s Bucket of Bernie Brains, Thanatopsis and many more) and fascinating collaborations (including one with actor Viggo Mortensen).

Perhaps no collaboration has been more visible than his four-year stint with Guns N’ Roses, which included his invaluable contributions to the much-delayed Chinese Democracy album. In 2010, Buckethead withdrew from the remainder of his band projects and began pouring all of his time and attention into his solo recordings.

Since his 1992 debut, Buckethead has released over 30 studio albums and, beginning with the cessation of his band activities, close to 300 albums as a part of his Buckethead Pike series (in 2014, he released a Pike album every six days for the entire year).

In 2012, Buckethead largely retired from touring, but returned to the road in 2016, alternating between completely solo shows and trio gigs with longtime bandmates Dan Monti on bass and Bryan “Brain” Mantia on drums. Last year, Buckethead released his very first live album, Live from Bucketheadland, on vinyl.

In the long, strange history of Rock, few have been around longer, done anything stranger or approached the prolific diversity of the man with the KFC chapeau.