'Rush: Cinema Strangiato 2019' is screening in theaters nationwide for a one-night-only engagement that includes the movie theaters in Newport and Oakley. 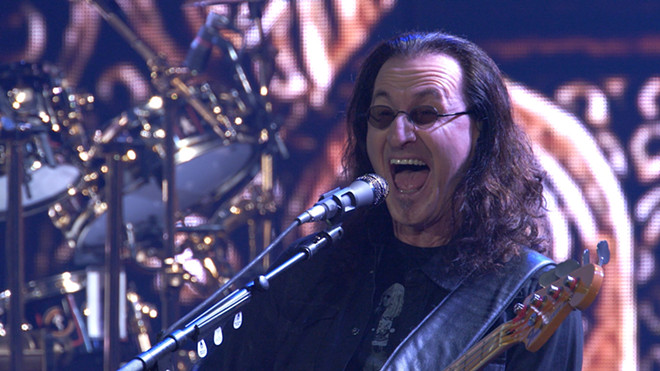 Photo: cinemastrangiato.com
Rush's Geddy Lee
It’s been four years since Classic Rock trio Rush played its final concert at the Los Angeles Forum. Although it's not "live," tonight (Aug. 21), fans missing the Rock and Roll Hall of Famers will have a chance to experience the band in a larger-than-life setting.

The movie Rush: Cinema Strangiato 2019 screens at theaters nationwide today for a one-night only engagement. The film mixes live performances and backstage footage from Rush's 2015 40th anniversary/final tour with interviews with the band members and famous fans like Billy Corgan and Tom Morello. Singer/bassist Geddy Lee also talks about his Big Beautiful Book of Bass in the movie.

Greater Cincinnati fans can catch the film at the Cinemark Oakley Station or AMC Newport on the Levee theaters this evening. There are two 7 p.m. screenings and a 7:45 p.m. one at the Newport theater; Oakley will show the film on two screens at 7 p.m. and 7:10 p.m. (The 7 p.m. Oakley screening is close to selling out.)

Advance tickets are available at cinemastrangiato.com.

Here’s the synopsis of Cinema Strangiato from the movie’s website:

The Holy Trinity of Rock returns to the big screen on Wednesday, August 21, when the first "Annual Exercise in Fan Indulgence" Cinema Strangiato brings Rush fans together in movie theatres worldwide. Featuring R40+, this global fan event will give audiences a special look into some of the best performances from R40 LIVE, including songs such as “Closer to the Heart", "Subdivisions", "Tom Sawyer" and more, as well as unreleased backstage moments and candid footage left on the cutting room floor. R40+ also includes unseen soundcheck performances of the fan-favorite "Jacob's Ladder", exclusive new interviews with Tom Morello, Billy Corgan, Taylor Hawkins, producer Nick Raskulinecz, violinist Jonathan Dinklage and more. As a special bonus, fans will get a glimpse into the madness and passion that went in to the making of Geddy Lee's new book, Geddy Lee's Big Beautiful Book of Bass - featuring a brand-new interview from the man himself.