Legendary Blues/Boogie Woogie pianist Big Joe Duskinpassed away in 2007, but thanks to the Big Joe Duskin Music Education Foundation, his legacy is living on and helping to build the future. 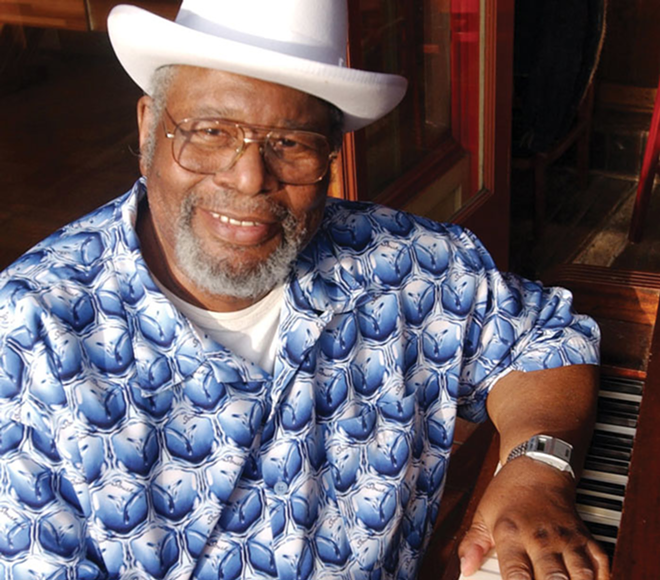 Legendary Blues/Boogie Woogie pianist Big Joe Duskin passed away in 2007, but thanks to the Big Joe Duskin Music Education Foundation, his legacy is living on and helping to build the future. Since 2010, the foundation has organized performances and educational opportunities for thousands of Greater Cincinnati-area school children, while also raising money for various schools’ music programs.

Wednesday would have been the internationally acclaimed musician’s 95th birthday, and there have been some cool Big Joe happenings lately. On Feb. 6, a memorial plaque in honor of Duskin was dedicated at North Avondale’s Sonny All Blues Cafe & Lounge, where Duskin used to perform.

On Wednesday at 7 p.m., the foundation presents a special fundraiser to help send Deer Park High School’s marching band to Disney World. The benefit (held at the school at 8351 Plainfield Road in Deer Park) will feature an all-star band of area musicians — including Randy Villars, Wade Baker, Marc Fields, John Zappa, Philip Paul and Art Gore — performing the music of native Cincinnatian and saxophone legend Frank Foster (an NEA Jazz Master who worked closely with the Count Basie Orchestra). Advanced tickets for the show can be obtained by calling the school at 513-891-0010.

This Friday and Saturday is the Cincy Winter Beerfest at the Duke Energy Convention Center (525 Elm St., Downtown), which is one of the primary funding outlets for the Big Joe Duskin Music Education Foundation. The popular beer-tasting event, now in its ninth year, offers hundreds of different craft beers from around the world. For tickets to the popular festival and more info, visit cincybeerfest.com and beerfesttickets.com.

To read more about Duskin and the foundation, visit bigjoeduskin.org.

• Cincinnati Indie Rock band Comprador is holding down the free every-Tuesday residency at The Comet (4579 Hamilton Ave., Northside, cometbar.com) for the month of February, joined each week by a special guest; this Tuesday it’s Whitfield Crocker, a project led by The Happy Maladies’ Benjamin Thomas, while the reigning Cincinnati Entertainment Award winner for Singer/Songwriter, Kate Wakefield, performs with the group on Feb. 23. In honor of the residency, Comprador is digitally releasing a new song each Tuesday. You can hear the new tracks at comprador.bandcamp.com.

• Esteemed local Jazz vocalist Kathy Wade was due to play a concert at Live! at the Ludlow Garage (342 Ludlow Ave., Clifton, liveattheludlowgarage.com) around the holidays, but the event was canceled. The rescheduled date — this Friday — works out nicely, though, as the show is now a romantic music affair timed to Valentine’s Day weekend. Wade (with Phil DeGreg on piano, Mike Sharfe on bass and Art Gore on drums) plays at 8:15 p.m. Tickets are $15-$35.

• This Sunday starting at noon, several area bands will be performing at the seventh-annual Autism Rocks benefit event at the Fairfield Banquet & Convention Center (74 Donald Drive, Fairfield, fairfieldconventionctr.com). Along with various auctions and other activities, attendees can also listen to scheduled performers Thunderstruck, Visual Kaos, Bad Habit, Hi-Fidelity, Mr. Chris and the Cruisers, Streetwise, Wize Guys, Britney’s Lipstick, Taylor Shannon, Dangerous Jim and the Slims, Mojo Rizen and Paisley Cane. Admission is a $20 donation for adults or $10 for children 12 and under. Find more info here.

• Another popular benefit concert that is in its seventh year is the Tie Dye Ball. The concert donates some proceeds from ticket and raffle sales to Play It Forward, whose mission is to “assist (musicians) in times of dire need, as well as proactively act as (a) comprehensive resource for the independent working musician.” Visit facebook.com/playitforwardcincy for more on the org.

This year’s Tie Dye Ball is Friday at The Redmoor (3187 Linwood Ave., Mount Lookout, theredmoor.com). The music begins at 9 p.m. and will be provided by popular local Jam/Rock bands Spookfloaters and Jerry’s Little Band. Admission is $10.