Sungaze Releases Powerful Sophomore Album, This Dream, in the Shadow of — and Partially Inspired By — the Pandemic Dreams are among the oddest dichotomies in the human experience. Whether in the context of our aspirations and goals for an unwritten future or the non-linear arthouse movies our brains concoct while we’re sleeping, dreams are incredibly powerful and yet delicately ephemeral. We construct our lives around vaporous thoughts that lead us to an illusory oasis shimmering on a distant horizon; we remember some of our childhood sleep imagery for the rest of our lives while most dreams are forgotten the moment our consciousness flickers on in the morning.

In that light, it makes perfect sense that Cincinnati Atmospheric Rock band Sungaze christened its sophomore album This Dream.

The brainchild of vocalist/guitarist Ian Hilvert and vocalist/keyboardist Ivory Snow, who are partners in life as well as music, Sungaze debuted almost exactly two years ago with Light in All of It, a potent showcase of their myriad musical influences — from Pink Floyd and the Beatles to Slowdive and Alice in Chains — and their ability to transform those Classic Rock/Shoegaze/Grunge influences into unique aural patterns and pulses. All of those elements are amplified and more fully realized on This Dream.

“It’s amazing,” Hilvert says. “Something that is so flimsy can influence your whole life and direction. You can have this goal to do this thing and you base all your emotions and actions off of it. That’s kind of the loose theme of the new album.”

The married couple has been well acquainted with dichotomy. Hilvert left his post as guitarist for local Metal band Fenrir to pursue a genre less dictated by anger and aggression. Snow had never been in a band and had never even trained on any instrument, but she had music in her DNA; her father and uncle had both been principals in the 1980s Cincinnati fave Camargo Road.

When Hilvert was assembling Sungaze in 2015, he installed Snow as temporary keyboardist while searching for a permanent member, but her songwriting and performing talents improved exponentially and she earned her spot in the line-up.

Snow’s nascent skills were clearly evident on the diaphanous Light in All of It, but they’re in full bloom on the more impactful and cinematic This Dream.

On Sungaze’s debut, Snow was the studio taskmaster for the band — which was then made up of four people — setting a high quality bar for the band to clear. On This Dream, only Hilvert and Snow contributed to the end result. 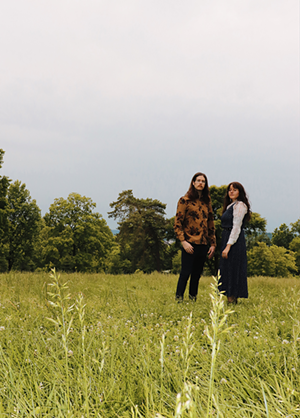 Photo: Dana Lentz
"...we decided to call the album 'This Dream,'" Snow says. "It’s the dream of people having what they need, being cared for and co-existing."

“We wrote the first album with our drummer (Tyler Mechlem), who was in the band for a long time,” Snow says. “At the beginning of 2020, he and our bassist (Jimmy Rice) both left to do other projects. Ian had built me a guitar for my 26th birthday in 2019 and taught me some chords, so this album was mostly written on guitar. The beginnings of this album were things I’d been working on that I brought to Ian and then we fleshed them out.”

The defection of half the band naturally altered the studio dynamic. While Snow still made a few quality-control suggestions, it was Hilvert, now also the bassist and drummer on This Dream, who stepped up to maintain the band’s sonic standards.

“We both kind of did it, but it was more Ian this time,” Snow says. “He was the one who was like, ‘You could play that a little tighter,’ or ‘You could do that better.’”

“I was the pusher on this album,” Hilvert agrees. “I just wanted it to be better.”

“And I always want that, too,” Snow says. “I definitely trusted him.”

That kind of interaction can be hard between bandmates, but it can become toxic between husband and wife. Hilvert and Snow have found the most effective tool to navigate their personal and professional lives.

“It’s the whole notion of honesty,” Hilvert says. “We learned through communicating just to be upfront and honest instead of holding things back to dwell on them later. It’s better that way. Uncomfortable? Maybe? But better.”

On Light in All of It, Hilvert tried to tamp down his long-standing Metal influences; even his gauziest playing live would attract questions about his possible Metal roots. With This Dream, he wanted to retain the core sonic integrity of Sungaze while dialing up the intensity.

“We did a lot more distorted guitar and things were a little heavier overall, but not heavy in a Metal way,” Hilvert says. “I think I leaned into the Metal stuff a little more this time while still trying to retain our diverse little pool of genres.”

It might be natural to assume that This Dream is, in some ways, a pandemic album, and it is — at least tangentially. Snow left her full-time job at the end of 2019 in advance of proposed touring behind Light in All of It, and Hilvert followed suit six months later. Obviously, the tour never materialized, but while Hilvert was still employed, Snow began working on song ideas, one of which became the album’s title track.

“For ‘This Dream,’ I came up with this chord progression,” Snow says. “I always write in some variation of the key of E, because it’s the most normal for me. The entire song is two chords, which is different for us and it came together like a download, where it happened all at once. One part is about new ways of relating and connecting, like in Italy where people would sing to each other from their balconies (during the pandemic). I thought that was really beautiful, so I was thinking of people coming together in new and different ways and what my ideal outcome would be.”

“That’s why we decided to call the album This Dream,” Snow continues. “It’s the dream of people having what they need, being cared for and co-existing.”

Hilvert and Snow continue taking tentative steps forward after the release of This Dream. They’ve already gotten solid positive feedback to their “Storm Chaser” video, and they’re planning on booking some shows (which, for the time being, will be accomplished with session players in lieu of permanent members) with the caveat that there could be another COVID spike in the fall and winter. They’ve also signed with music rights firm BMI to license their songs for commercials and films, a natural placement for Sungaze considering the cinematic scope of This Dream.

“I don’t think we intentionally went for that (cinematic feeling); it’s just that part of our personalities coming out,” Hilvert says. “We’re both chill on the outside, but on the inside, we’re all...”

And with married couple precision, Hilvert and Snow finish the thought in unison: “Dramatic.”

Sungaze releases In Dreams on Aug. 13, with pre-orders on physical CDs and vinyl available at  sungaze.bandcamp.com/album/this-dream. The vinyl version of In Dreams is a limited release of 200 copies, pressed in lilac-colored vinyl and featuring an 11-inch-by-17-inch lyric sheet/poster.

For more on Sungaze, visit sungazemusic.com.