The Cincinnati Black Music Walk of Fame will also unveil its second round of inductees on July 23. 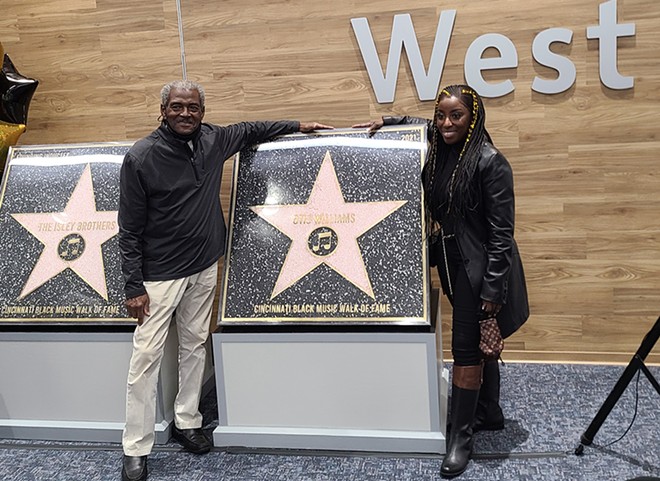 The Cincinnati Black Music Walk of Fame will open to the public during one of the city’s largest tourism weekend of the year. As an official event of The Cincinnati Music Festival, on July 23 the soon-to-be star-studded Walk of Fame will unveil its second round of inductees and its official star design while offering live music, celebrity appearances and a roller skating activity.

Just one year after the idea’s inception, The Cincinnati Black Music Walk of Fame Founder and Hamilton County Commissioner,  Alicia Reece, says the event will be historic and attract more attention and traffic to the already buzzing weekend. The Walk of Fame is located outside of The Andrew J Brady Music Center, where the first eight stars will be unveiled in the ground after an induction and dedication ceremony inside the music center. The ceremony and its events will take place from 12-3 p.m.

“July 23 is critical and I think historic,” says Reece. “A new induction class will be coming in that’s Penny Ford; Midnight Star, with the original members who haven’t been together I'm told since they broke up; as well as Wilbert Longmire, who played in the first Cincinnati Jazz Festival, which is now the Cincinnati Music Festival. And we are inducting Hi-Tek, a well-known producer who has worked with Snoop Dogg and Dr. Dre.”

While patrons can expect to see the official design of the stars and their permanent placement in the ground, a construction site will remain behind the honorary eight installations. The Walk of Fame was thought up to be an interactive tourism park with many features like QR codes, computer-generated 3D images, augmented reality and other smart device-assisted entertainment options. Reece says the park will eventually debut again in 2023 with all the interactive features, which are currently being designed by Cincinnati’s own attraction design company, JRA.

“We have finalized the actual design of the Cincinnati Black Music Walk of Fame but supply chain issues have pushed us back a little bit in terms of the finished product,” Reece says. “It will be 2023 and that will include all of the interactive elements. This is a complicated project because we put the technology in there. On [July 23] we will have a final design concept drawing and an animated video where you can see what the technology components do and will look like.”

The technology-based components are more than just for entertainment’s sake. The education and entertainment features that can be included are endless, as information can be updated and changed at any time. Reece says this gives the park the opportunity to share information about other influential black musicians who have played a big role in the scene but maybe don’t have an official star on the walk.

”[The park] is a half an acre,” says Reece. “But through technology, it's a lot bigger.”

Over the next 50 years, four new inductees will be announced per year. This guarantees the park will honor 200 artists at its maximum capacity. Bootsy Collins, Otis Williams, The Isley Brothers and Dr. Charles Ford were the first four inductees and are considered founding members. Collins and Williams are expected to appear at the event. Last year, the founding members were honored at CVG, where plans for the Walk of Fame were also debuted. What was supposed to be a temporary installment at the airport has since been deemed a permanent attraction and advertisement for the Walk of Fame.

Reece says there were an overwhelming number of nominees to choose from and she’s proud to honor the four selected by the independent board of directors. Anyone can nominate an artist on the Cincinnati Black Music Walk of Fame’s website, where a list of qualifications is also publicly available.

All inductees for 2022 will be present at the ceremony, except for the late jazz guitarist Wilbert Longmire, who was raised in Cincinnati and toured the world with the likes of legendary vocalist and guitarist George Benson. Penny Ford, a multi-instrumentalist and vocalist, gained international fame as the frontwoman of Snap! in the ’90s and went on to successfully release solo music as well.

The soul, disco, R&B group Midnight Star originated in Frankfort, Kentucky. Reece says the original members, the Calloway brothers, will appear at the event. The brothers also made up the Cincinnati-famed R&B duo Calloway in the late ’80s. Cincinnati-native, rapper and producer Hi-Tek holds a long list of production credits but is mostly known for his work with hip hop artist Talib Kweli.

“When you think about the artists, the inductees we are bringing in this year,” Reece says. “It’s basically a big party. It’s dancing and having a good time, these artists brought a lot of joy to people and homes.”

The debut event is slated to run from 12-3 p.m. with a live performance and inductee dedication by the Zapp Band, a Funk group that originated in Dayton, Ohio, in the late ’70s. The event will be co-hosted by Reece and Jawn Murray, popular TV host, pop culture expert and media personality.

“The one thing I’m hearing from a lot of the artists is that they’ve won a lot of awards from all over the world,” says Reece. “But it’s nothing like being acknowledged by your hometown. And to have this interactive tourism attraction that will be what I call ‘edutainment,’ it will be entertainment but also educating people, we are doing it in a fun way and it's free and open and going to hit your smart devices. There will be geofencing around it and augmented realities, QR codes. So it's kind of like when technology meets history and we do it in a way of tourism, and hopefully people leave with more information than when they came.”

More information about the July 23 event and the Cincinnati Black Music Walk of Fame can be found at cincyblackmusicwalkoffame.org.