Released digitally late last year, you can grab a tape of 'San Lorenzo' this weekend at the group's free MOTR Pub show 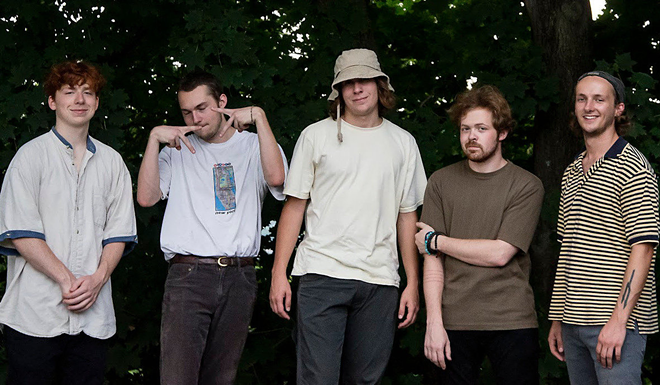 Photo: inthepinesmusic.bandcamp.com
In The Pines
Late last year, Cincinnati Indie/Psych Rock band In The Pines released the digital version of its stellar second album, San Lorenzo. After recently unveiling the music video for album track “I’m Good,” the five-piece is hosting a release show for the new cassette version of the album this Saturday (Feb. 2), performing with guests Boa (from Louisville, Kentucky) and The Medium (Nashville) at MOTR Pub (1345 Main St., Over-the-Rhine, motrpub.com). Showtime is 10 p.m. and there is no admission charge.

Guitarist Charlie Horn and singer/guitarist Michael Shular formed In The Pines in 2016 and released debut album Mirror of Evolution a year later. After the release, the pair built the band up with the addition of bassist Patrick Zopff and saxophonist/percussionist Graham Holthaus, later adding current drummer Alex Dungan.

In The Pines’ entrancing sound shares some core traits with the ’60s Garage/Psych Pop showcased on the earliest Nuggets compilation albums, but the musicians add new twists on top of the trippy melodics and snaking song structuring, giving San Lorenzo a decidedly contemporary vitality. “I’m Good” is representative of all that is great about In The Pines, with watery textures and steering sax lines pulsing beneath a creeping melody before exploding with harmony-laden, radiant hooks and rockist bombast that exude a magnetism similar to The Dandy Warhols at their most electric.

Throughout the album, In The Pines recalls a wide spectrum of other brain-tickling rockers — from the Art Rock swagger of Fun House-era Stooges to the Shoegaze thrust of Stone Roses and early Verve — but the band puts everything together so creatively and seamlessly, listening never devolves into merely a game of “spot the influences.” The album opens with the reverberating guitar twinkle of “Paper Dagger,” which has a bit of an Oasis strut, while the instrumental “Lotus Sofa” is a mesmerizing meld of Indie Rock and Jazz Fusion that’s untethered from the verse/chorus/verse rules of Pop songwriting.

In The Pines touches on a variety of colors and tones associated with psychedelic music throughout the ages, but the band’s chemistry and ability to compose memorable songs transcend comparisons. It’s music in which to get lost; don’t overthink it. To quote a landmark of Psych Pop, San Lorenzo is the perfect album to turn off your mind, relax and float downstream.

On Jan. 26, In The Pines debuted a new music video for "I'm Good." Watch the amusing action/thriller parody below:

San Lorenzo is available to stream on platforms like Spotify. Go to inthepinesmusic.bandcamp.com to download a copy. And visit facebook.com/inthepinesmusic for more on the band.