Self-described as 'Industrial Cyberpunk,' Relic first came together in 2015. 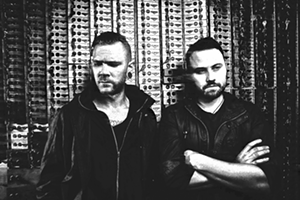 Photo: Provided
Walking into the living space of Relic’s Jordan Davis and Dan Dickerscheid, the Cincinnati band’s Industrial-style Electronic music is made corporeal.

Housed in an old factory, the building has steep steps, low ceilings, concrete and old tools strewn about, plus dirt, grime and at least three angry poltergeists gunning for revenge

Dickerhscheid’s room features a half-sized door and ceiling brace that’s just about chest level, both of which are just begging to be absentmindedly slammed into. The rest of the area is filled with his stark black-and-white paintings and installation sculptures in varying levels of completion. Davis’ room is much smaller by comparison and brimming with instruments. A massive computer rig lords over the living room space.

The duo’s living arrangement, a creative space nestled within a decrepit bastion of industrialization, typifies the sound that Relic has produced in its one-and-a-half-year run.

While the project has only been around for a short period of time, the members themselves are musical veterans. Davis (keys/vocals) has an especially colored history within the genre.

“(Relic) was a project I knew I wanted to start for a while because I used to have an Industrial band and we used to play around here for four to five years,” he says. “We got signed to a label when I was 18. I was young, so I took it as a learning process. I ended up disbanding the project because I wanted to start something new, branding wise and sound wise, and (run) it as efficiently as possible.”

Between his former project and Relic, Davis continued to write songs, produce Industrial and Electronic music and play live and collaborate with Industrial Rock stalwarts Cyanotic.

When Davis was offered the chance to perform solo at the local Adjust Your Eyes Fest in 2015, he decided he wanted to debut Relic instead, but needed to add a missing piece.

“The first thing I knew I wanted was a live drummer; that was my priority because that’s the hardest thing to find for Electronic music,” Davis says.

He didn’t have to look far. He simply had to go to work.

Davis met and became friends with drummer Dickerscheid at Rake’s End, the local bar and performance space where he worked. He never knew of Dickersheid’s drumming talents until one fateful open mic night, when Dickersheid played the hell out of a small drum setup on a whim. The two clicked, played their first show together at AYE Fest and have continued on ever since.

While their set initially began with songs that Davis had written, the addition of Dickersheid has added a new aspect to the songwriting process.

Davis describes their sound as Industrial Cyberpunk, but he isn’t attempting to jump on the Ghost in the Shell revival hype. He truly strives to capture a “high-tech, low-living” ambiance in all of their tracks. And it begins with the drums.

“Drums are the important things. They’re the most constant part of the track,” Davis says.

“It’s what drives it,” Dickersheid adds.

Most tracks come together with Davis pouring over minute details to make the drums and bass ominous and the guitars and synths punchy and making certain it all works together as one cohesive piece.

“Some tracks might be a night bender where I just sit down and experiment; usually things start like a sound design approach,” Davis says. “Very rarely will I be like, ‘I’m going to write the chords first, (then) the progression and the lyrics.’ I have done that a few times but it usually centers around me picking out the base of the drums’ sounds — the kick and the snare. I’ll spend hours perfecting it.”

With Dickersheid’s help, Davis’ compositional duties are now shared, but the process still often takes place on Davis’ keyboard rather than in a rehearsal space. Still, having two members has made “jam sessions” possible, and some material has come about that way.

“I’d say (about 30 percent of) the songs come traditionally, the way you’d assume you write music — you get musicians in a room, you jam out, then you make stuff,” Dickersheid says. “We’ve made a couple songs where we’ve just fucked around with the electronic (drum) kit.”

What results are tracks with a danceable Pop mentality buried underneath overwhelming layers of sledgehammer-strong drum and bass rhythms and married to Trip Hop keys and samples. Davis’ lyrical delivery harkens back to Trent Reznor in the early ’90s — eerie, sexy, hissed vitriol.

Relic has been able to translate the fury and aggression of its music into an equally explosive and charged live experience. Broken lighting rigs, thrown equipment and bottles of water that are spat more often than they are drank are all to be expected.

“As you play with another musician, you learn what you can and can’t get away with onstage,” Dickersheid says. “We definitely play off of each other. Like when I see (Davis) losing (his) goddamn mind, I’m going to push a little bit harder.”

The band has kept busy playing shows in and out of town and constantly writing and recording new material. The musicians have actually been so busy they have yet to complete a full-length release, something for which fans have been clamoring for quite some time.

That should be changing in the near future — while a release date has not been officially set, Relic’s first album, Pulse Code Misery, should be out soon, and they plan to release another batch of songs sometime this summer.

For such a young band, Relic has gained a lot of traction and earned the respect of its peers in a short amount of time.

This is one relic that didn’t need a great deal of history behind it to earn a place of honor in Cincinnati’s musical landscape.

RELIC performs at The Mockbee in the West End on April 15. For music and more info, visit relicofficial.com.