To celebrate the new album's April release, the guitarist/composer is playing a handful of European dates with special guest Thom Yorke 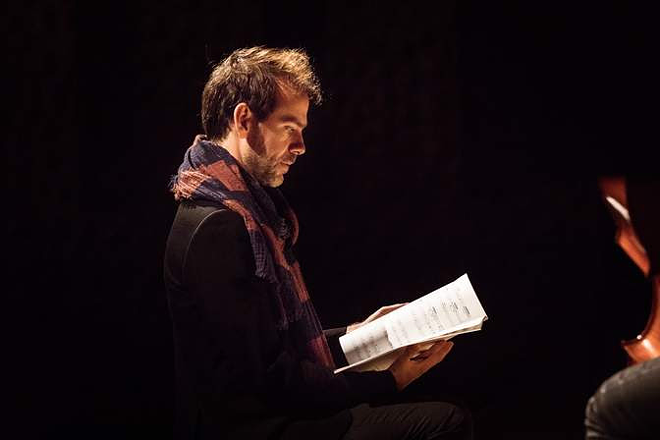 Bryce Dessner — a Cincinnati native and guitarist for internationally renowned Indie Rock band The National — has unveiled a new Classical work from his forthcoming solo album, El Chan, which will be released April 5 on Deutsche Grammophon.

The twirling, serpentine  "Haven" — a new work written for two pianos and two guitars — is available on most streaming/digital platforms now. The recording is credited to the MDH Quartet: Katia and Marielle Labèque on pianos and David Chalmin and Dessner on guitars

"Haven" will get its live premiere on Dessner's Minimalist Dream House Tour, four European dates that will feature the MDH Quartet musicians, as well as special guest Thom Yorke (Radiohead), who will also be premiering new music. The other Dessner compositions making their recorded debut on El Chan are "Concerto for Two Pianos" (performed by the Labèques, Orchestre de Paris and Matthias Pintscher) and the titular "El Chan," which is dedicated to Mexican film director Alejandro Iñárritu, whose The Revenant Dessner scored.

Here's video of the French premiere of "Concerto for Two Pianos" at the Philharmonie de Paris last October.

The National recently released a new song, "You Had Your Soul with You," from its forthcoming album I Am Easy to Find, which is set for a May 17 release on 4AD.

Dessner's multimedia "Triptych (Eyes of One on Another)," inspired by and featuring the photos of Robert Mapplethorpe, is currently on its own tour. The performance premiered March 5 in L.A., moves to Ann Arbor, Michigan this weekend, then heads to Knoxville, Tennessee next weekend for the Big Ears festival. It will then be performed in Washington, D.C. and New York.

Here's the lowdown on El Chan from the press release:

Arranged for two pianos and performed regularly internationally by Katia and Marielle Labèque, El Chan is dedicated to Dessner’s friend and collaborator, film director Alejandro Gonzalez Iñárritu and his wife Maria Eladia Hagerman. The work is inspired by the mythical guardian spirit, ‘El Chan,’ of a pool of water nestled in the canyons close to Iñarritu and Hagerman’s hometown of San Miguel de Allende, in the stunning Mexican landscape, and which has been the source of popular legends for many centuries. Iñárritu, in turn, created the cover artwork for this new album.

Bryce Dessner’s Concerto for two pianos was written for Katia and Marielle Labèque after the three met during rehearsals with Los Angeles Phiharmonic several years ago and where they formed an immediate bond, both musically and personally. The work premiered with London Philharmonic Orchestra at Southbank Centre in April 2018 and has been performed internationally by – among others - Orchestre de Paris, Borusan Istanbul Philharmonic Orchestra, Dresdner Philharmonie, Musica Nova in Helsinki (where Dessner was artist in residence) as well as Netherlands Philharmonic. Its US première takes place with Cincinnati Symphony Orchestra in September 2019.

“There are moments when you marvel at his ability to bleed pigments into each other, like a watercolourist” - Financial Times, after the world premiere of Concerto for two pianos, London April 2018

Other forthcoming highlights of Dessner’s creations in-concert include Triptych (Eyes of One on Another), a major new 70-minute work for 10-voice choir and ensemble which explores the profound impact and influence of the master photographer, Robert Mapplethorpe, and which will be premiered by the LA Philharmonic in March 2019; the release of the film The Pope for which Dessner wrote the soundtrack, recorded with London Contemporary Orchestra at London’s Abbey Road Studios; and performances of Voy a Dormir, with Los Angeles Chamber Orchestra, written for and premiered by mezzo-soprano Kelley O’Connor and St. Lukes Orchestra, commissioned by Carnegie Hall.