This will be Pop Empire's first show since spring of last year. 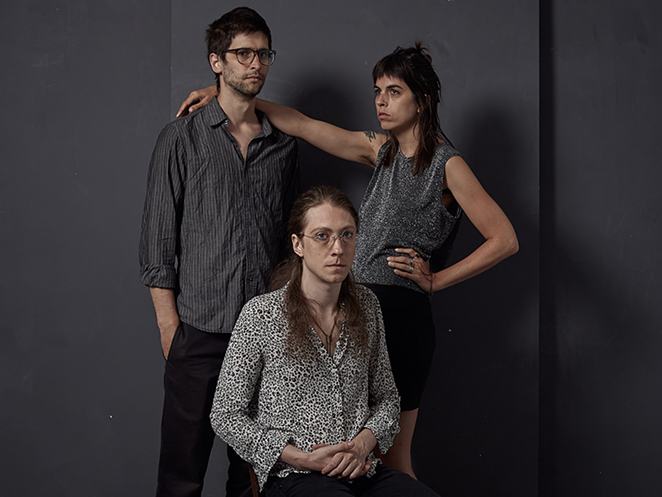 In the Roman Catholic tradition, a novena is a ritual that takes place over nine consecutive days in which participants dedicate prayer to a particular saint or holy figure. If you’re talking about Cincinnati Psych-Rock bands, though, Novena refers to the nine tracks that make up Pop Empire’s most recent LP. Arriving mid-2019, the record signified a sonic breakthrough — and a new lineup — 10 years into the trio’s history.

While founding member and bassist Henry Wilson’s Blues-y undertones and twangy affect are present as ever, Novena’s overarching mood is unusually dark, thanks to a reverb-heavy mix and contributions from the band’s new members. Guitarist (and CityBeat contributor) Katrina Eresman plays her leads with a minimalist, expressive voice that is reminiscent of Television’s Tom Verlaine — albeit much noisier — while Jake Langknecht’s light touch on the drums keeps the sound cavernous. The instrumentals are distant, yet seem to surround the listener from all angles like a hazy stratosphere.

Disparate musical interests leading up to the release of Novena intersect perfectly to form a spooky atmosphere that sounds like impending doom. According to a 2019 interview with Audiofemme, Eresman has a penchant for Drone-y riffs, while the subtle influences of Gospel and Boogie Rock on Wilson’s songcraft come from listening to “a lot of ’20s and ’30s” music.

“The songs all have to do with evoking a very calming and reassuring presence that feels very familiar, from like before you were born,” he said.

The Cincinnati show at Fountain Square’s Fifth & Vine Live concert series (with locals The Harlequins and Slow Glows) will mark Pop Empire’s first performance since spring of last year. You’d be hard-pressed to find a more scenic spot to return to the live music circuit.