In 1993, Cincinnati band Throneberry found themselves abruptly thrust upon an exploding Indie Rock landscape, with ears from around the globe tuning in for the group’s next move.

“We got really lucky at the outset,” singer/guitarist Jason Arbenz says.

The band’s first 7-inch record (“Touched,” for Lexington, Kentucky’s Alias Records) was a “Single of the Week” for Britain’s hugely influential New Music Express publication, which gave the band notable coverage with its debut album still seven weeks away.

“It was mind-blowing to get that attention based on just a 7-inch, but with that came anticipation,” Arbenz says. “It was a double-edged sword.”

About that track: Greg Dulli of The Afghan Whigs, a friend of the band members, had caught the group’s set at local club Sudsy Malone’s and asked to produce a recording of the song. “He said, ‘Let me produce that and you’ll get a record contract.’ And he turned out to be dead right,” Arbenz says with a laugh.

Throneberry recorded three albums and a handful of EPs for Alias, a label whose roster also included seminal Indie Rock acts like Archers of Loaf, Yo La Tengo and American Music Club. Throneberry’s 1994 debut LP, Sangria, would be hailed by the U.K.’s Melody Maker as “practically boozy with great songs.” Along with touring Europe with the Whigs, the group did stints on the road with Urge Overkill, Grant Lee Buffalo and the Meat Puppets.

To commemorate the upcoming 25th anniversary of Sangria’s release, Throneberry decided to get back together for a hometown show. Arbenz, Womelsdorf, Cavins and McCabe will perform on Jan. 25 at The Woodward Theater in Over-the-Rhine. 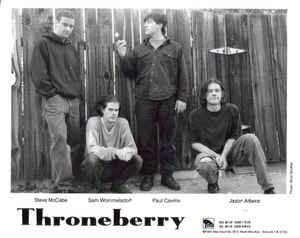 Photo: Chris Strother
'Sangria'-era promo photo of Throneberry
“Around the release of Sangria, the future was wide open,” Arbenz says. “It seemed like there was no ceiling. Things moved along very quickly for us; we kind of jumped in the deep end. Nineteen-ninety-four saw us doing some of the coolest stuff we did — touring with Weezer and Lush, playing on BBC radio.”

“But,” Arbenz pauses, “there was some whiplash involved.”

Fast-forward to just a couple years later and the band was in a much trickier position.

“Our last year-and-a-half was fairly difficult,” he says. “We started to have more heads involved in the decision-making process, from our label, management and major label distributors that were involved. There was more of a notion of ‘let’s write a single,’ and I think that’s a death knell, rather than living up to your own artistic ideal. We got a little distracted by the business.”

Case in point: Throneberry’s third and final LP, Squinting Before the Dazzle, was recorded in November of 1996, but didn’t see release until June of 1998.

“During those 18 months, there were major label distributors that had to give their blessing,” Arbenz says. “They didn’t hear a single, so we recorded more songs. We went to New York to work with Eli Janney from (acclaimed Indie Rock act) Girls Against Boys. We ‘tarted up’ a couple of our tracks, hoping it would make them more appealing. In the end, I think we lost our window of opportunity with that long delay.”

Womelsdorf chimes in: “The golden reign of Indie Rock was coming to a close,” he says.

Throneberry’s first show was in 1990. Arbenz and Cavins had already gigged locally with Liquid Hippos, and Womelsdorf approached them about collaborating on new music. McCabe came along soon afterward.

“I lived with (Ultrasuede studio co-founder and Afghan Whigs bassist) John Curley at that time, so we had the advantage of being able to record frequently,” Arbenz says. “We’d do weekend shows in Dayton, Columbus, things like that.”

After mailing out demos to a few prominent labels, it only took Alias all of three short days to get in touch. At the time, Cincinnati was getting a lot of national attention, becoming one of several cities to be deemed “the next Seattle,” a reference to the post-Nirvana fame that came to the Washington city’s music scene.

“I flipped out over Jason’s voice,” recalls Alias Records owner Delight Hanover. “The instrumentation was a combination of a Classic Rock/R&B-revived formula, with a ’90s influence. I went to see Throneberry play for the first time at Sudsy’s and had a great time. Another fun recollection (is) the band’s European tour, and the response in England was fantastic.”

Of the spotlight quickly turning their way, Arbenz says, “We always looked to our sides and saw (fellow Cincinnati bands) Ass Ponys, Afghan Whigs, Lazy, Roundhead, Schwah — I thought we were in their class, but it seemed a little random. We felt very fortunate.”

Sangria was recorded in Cincinnati at Ultrasuede with Dulli and Curley, but Throneberry’s next two albums — beginning with 1996’s Trot Out the Encores — would be tracked a long way from home. Particularly in a brand-new, state-of-the-art studio built by Hanover in Los Angeles.

“She built a first-class studio called Royaltone, and we were their guinea pig band,” Arbenz says. “We had Joe Chiccarelli (a producer who has worked with acts like U2, Beck and Elton John) on board, and we’d do those records over the course of eight or 10 weeks. We were way more under the microscope. The results may have sounded better, but it was hard work, long days, a whole new world.”

Throneberry's 1994 debut album, 'Sangria'
Looking back, the musicians acknowledge that some of their aspirations maybe weren’t ultimately met, but they remain grateful for the experiences.

“With a hint of frustration, we were exposed to a level of success that would have extended to a career,” Womelsdorf says. “(But) we were knocking on a door that ultimately eluded us.”

“Sam has been fortunate musically, so the Throneberry days are not necessarily his glory days,” Arbenz says. “As for the other three of us, there’s no doubt that they were.”

Womelsdorf affirms his anticipation for the reunion, alongside appreciation for coming of age as part of our region’s strong music scene.

“I knew (rehearsing the songs) would be fun, but it’s been super rewarding,” the guitarist says. “That time in our lives was rich with friends, and this town has always been so supportive. This has been a great catalyst for reconnecting with people.”

“It’s been such a long time,” Arbenz adds. “We’ve all made a bunch of friends who weren’t around in the Throneberry days. For me it’s a great opportunity to get friends to finally see what I won’t stop talking about.”

Check out the "Friends of Throneberry" Facebook page to see tons of photos of the band (now and then) and more Throneberry fun stuff.