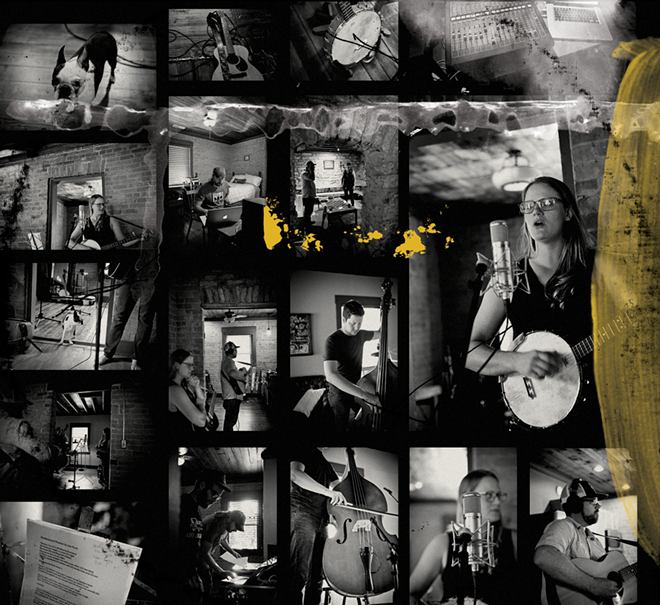 Photo: Keith Neltner
From the recording session of “Stonehouse Road"
“I finally got the guts to start doing this and I don’t ever want to stop,” proclaims 35-year-old Chelsea Ford, bandleader of Cincinnati’s Chelsea Ford and The Trouble, beaming with a mischievous smile under a worn trucker-style cap. “I ain’t going nowhere!”

That outlook bodes well for the rest of us, as Ford and her band recently celebrated the release of an exceptional debut album at Camp Springs Tavern in nearby Melbourne, Ky. For a local act barely over a year old, things have happened fairly quickly.

“We’ve played over 30 shows in the last year with some of my favorite bands,” Ford says. “I still feel like the new kid on the block and I feel a lot of pressure since everyone around me has been playing for decades and I’ve only been playing for five years.” 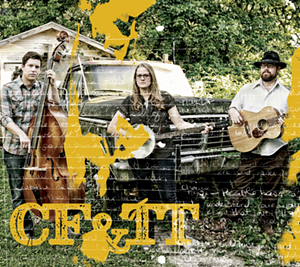 The stage took some getting used to, though. Before The Trouble was a thing, Ford’s husband Jonathan (also of Country/Americana group Warrick & Lowell) encouraged her to go to an open mic at Price Hill Americana club The Crow’s Nest, which she calls “a terrifying experience.”

“Some of the best pickers and players in the city are there sometimes,” she says. “I think my whole body shook violently the first few times I played, and I remember asking Jonathan, ‘When does this get fun?’ I hated it, but he kept pushing me.”

Chelsea Ford and The Trouble features Ford on banjo, with Jonathan on acoustic guitar and Matt Crone on upright bass. The collection of tunes breathes in kicked-up red dust from rural paths and exhales stark, confident Americana, drifting from melancholy reflections to up-tempo, string-band Folk with Bluegrass inflections, complemented with violin, dobro and steel guitar. There are songs about killing a man alongside lover duets and laments about drinks holding on a little too closely. They are heartfelt tunes — played with top-notch skill — that are like pulling open photo albums to present both joyous and distressing recollections.

“When I was 23 years old I had the honor of seeing (highly regarded local Jazz bassist) Bob Bodley at The Blue Wisp,” Ford says. “I only got to see him once (Bodley passed in 2007), but that experience changed the course of my life. I decided I had to learn the bass — (he played with) strength and a beauty and with an obvious love for the instrument. I’ve never seen anything like it to this day. I was going through a very hard time in my life and he hit me through to my core.”

It was only appropriate that they record the album with supportive friends and in a historically-steeped location ripe for renewed action. Enter Keith Neltner.

Neltner should need no introduction to many area music fans; the Camp Springs, Ky. native cut his teeth at local marketing agencies before becoming a major force in the design and music worlds, with a roster of clients that includes Hank Williams III and Shooter Jennings. You’ve also seen his design work for local spots like Braxton Brewing and Lucius Q.

Neltner and his wife Amy are also relatively new owners of the Camp Springs Tavern, a spot with tons of history emanating from its hand-cut stone walls.

“From the early planning and buying of the Tavern, we envisioned a community spot where bands like The Tillers, Buffalo Wabs, Jeremy Pinnell, The Kentucky Struts and other friends could perform,” Neltner says.

Of course, Neltner’s design artistry is frequently involved, too, as many of the Tavern’s shows are memorialized with limited-edition screen prints designed and printed by his own Neltner Small Batch design company.

Ford, The Trouble and Neltner were already acquaintances before appearing as guests on the same local podcast (full disclosure: your humble writer is a host of the program, Herzog Music’s Lost on the River). After overhearing The Trouble’s interview, Neltner decided to offer the Camp Springs space to the band for recording.

“The idea of recording in the floors above the Tavern bubbled up last year in conversations with local musicians and producers,” Neltner says. “So, it was really finding the right artist and producer to give it a shot. My wife and I were fans of the band from the get-go, so it was exciting to hear the band had material they wanted to record and release soon. After a quick email and tour of the space with engineer Robert Fugate, the whole process came together quickly.”

“We recorded the first track (the a cappella ‘Wake Up’) in the ice room downstairs,” Ford says. “Rob had to drop a mic through a window and down three floors. Keith was there to help turn off refrigeration units and snap some pictures, but that was it… The walls are entirely made of stone, and it has a beautiful natural echo. It was surreal. You can feel the history of that building. We did two takes and that was that.” 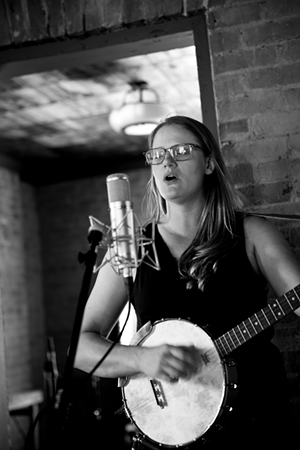 Contributions came from other friends in the music scene, too.

“The song ‘Killing of a Killer’ was recorded upstairs with Joe Macheret (of The Tillers and Joe’s Truck Stop). Joe was in a different room but nailed it in two takes — that blew me away,” Ford says.

The whole day was a success, according to Neltner.

“It was all about the band and Robert having what they needed, feeling comfortable in the space,” he says. “I admire the process of music being created. I’ve been at sessions with Hank III and Kentucky Struts with a formal sound booth and linear scenario. Learning that, from their perspective, it was a tranquil day, and they laid down 13 tracks — (it) was super positive.”

The visual connection is that Neltner created the cover artwork while taking in the recording session as it was happening before his very eyes.

“I wanted this to be the culmination of everyone’s skill set and see what that would become,” he says. “Most of the time, when I work on album projects, they’re recorded and done — I get the rough cuts and inspiration flows from there. This was different in that I was experiencing everything in between the takes, even a snoring dog in the corner. The energy Chelsea, Jonathan and Matt have for the music allowed me to get to know them and then go off and create a vibe through the art.”

Does this mean that Neltner plans to expand his empire to include releasing music recordings? He only hints at an answer.

With eyes to the future, Ford still recalls that crucial moment being inspired to get into music, something she shares in the album’s liner notes.

“I hope Bob Bodley would be proud to know that he got me to learn three instruments and to sing in public,” she writes. “When I say this album didn’t take long to make, but it’s been long in coming, those who read this will understand now. It is really hard to explain what this album means to me because all of it has been there all along. It’s been hiding and waiting for so very long, and now here it is and I’m amazingly proud of it. Follow your dreams, it will fill your heart in ways you can’t imagine. Let your song be sung.”

Chelsea Ford and The Trouble play the Southgate Roots Revival: Fall Folk Festival at Southgate House Revival on Sept. 8. More info on the band can be found here.