Cincinnati Shoegaze/Dream Pop Band Sungaze Readies Debut Album, 'Light In All of It' 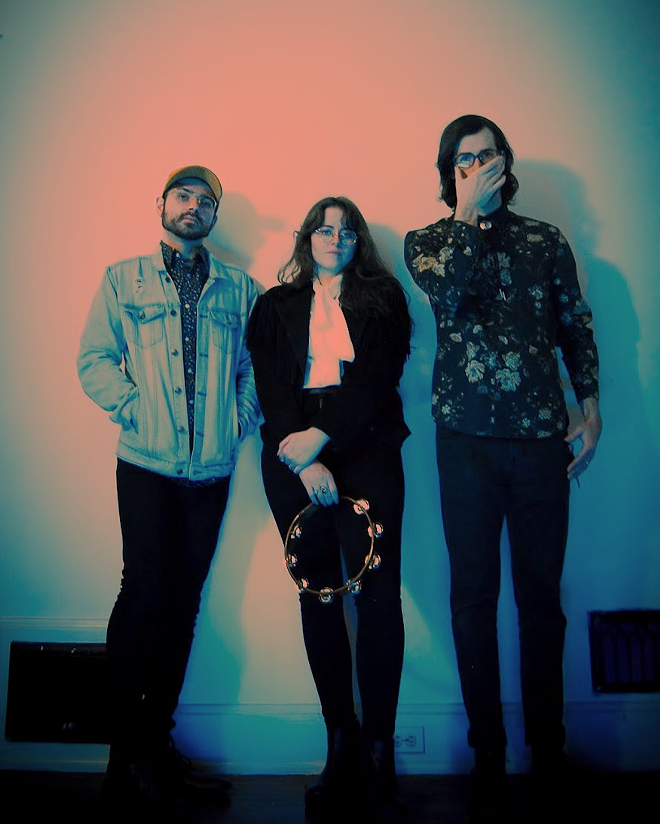 Photo: Skye Schaffner
Sungaze
Even a cursory listen to Light In All of It, the debut album from Cincinnati band Sungaze, reveals a wealth of influences that have been absorbed, translated and incorporated into the quartet’s sonic miasma — inspirations that include The Beatles, Slowdive, Alice in Chains, Tame Impala and Pink Floyd. Intense sheets of guitar wash hint at ’90s Shoegaze. Bursts of noisy dissonance indicate a love of Grunge. A hallucinatory vibe recalls the glory days of Psychedelia and the band’s ethereal vocals and melancholy melodic textures are reminiscent of Mazzy Star and Chris Isaak.

It’s a beautiful, hypnotic and engaging musical mosaic assembled from the listening and performing histories of Sungaze’s primary songwriters, the husband-and-wife duo of guitarist/vocalist Ian Hilvert and keyboardist/vocalist Ivory Snow. The pair is joined in the group by newly acquired bassist Jimmy Rice and longtime drummer Tyler Mechlem.

And yet Sungaze has one rather unexpected bullet point on its résumé — one that doesn’t seem remotely in keeping with the gauzy epics that comprise Light In All of It, recorded at their Walnut Hills rehearsal space. When the band plays live, it’s not too difficult for intuitive members of the audience to pick up on the sonic signs pointing to Hilvert’s recent past.

“It’s funny, because when people hear us, they’ll say, ‘Did you used to play Metal?’ ” he says with a grin. “I can’t unlearn it. I still listen to all that stuff today. The lead lines and whatever still come out, which is kind of cool, because you wouldn’t hear a Metal guitarist on a Psych record.”

Hilvert and Snow are obviously compatible as a romantic couple — they married last fall after a six-year relationship — but you wouldn’t necessarily pick them out of a lineup as bandmates. Hilvert’s last band affiliation was with Fenrir, a local Metal outfit that played in the area for about five years. Burned out on Metal, he exited the band in 2015 to start Sungaze, enlisting Snow (his then-girlfriend) to be his interim keyboardist.

“I still appreciate Metal but I just wanted to make some other kinds of music,” Hilvert says. “I wasn’t feeling so angry anymore.”

Sungaze's 'Light In All of It'
For her part, Snow was happy to be a placeholder at the keyboard position in Sungaze until a permanent player could be installed. She had never been in a band prior to joining Hilvert in his new venture and, although she had a pretty decent musical pedigree, she wasn’t sufficiently confident in her own nascent abilities.

“I’ve never been classically trained on any instrument, so I was doubtful I could do it at all,” Snow says. “I always wanted to. When I was a kid, I was like, ‘I’d love to be a musician,’ but I never did lessons or anything. And when I was growing up, my dad was a musician; he and his brother Andy played in a band called Camargo Road. When I was born, they were doing their practices in the basement, so I grew up listening to everything they were playing, which was a lot of Pink Floyd, Frank Zappa, Neil Young. My dad was into the classic singer/songwriter stuff, so that’s what I picked up on, like Gordon Lightfoot. I think that’s mainly where my influence comes in.”

Thankfully, Hilvert wasn’t looking for a keyboardist very strenuously, and Snow improved and evolved in her role, ultimately becoming one of the band’s chief songwriters. She has also become the band’s de facto manager, booking agent and quality control inspector.

“Ivory’s got a very particular kind of thing,” Hilvert says. “She’s like, ‘We need to be better; we need to have higher expectations for ourselves.’ That dialogue had gone on a number of times and she kept setting the bar. I could have played any old thing and been happy with it. I came up with it.”

Everything seemed to coalesce for Sungaze about a year and a half ago, when Snow’s vocals became more prominent in the band’s songs. The real clarity came with the track “Washed Away,” which became the creative benchmark for subsequent material (and ultimately featured local Kate Wakefield on cello) and the target sound they had been seeking from the start. It was also the first song that Snow had a major role in writing, establishing the tone for the rest of the album and the process of setting aside their lesser material and concentrating on their stronger songs.

“We’d had these chords for a long time and I really liked them but everyone else was ‘Eh. I don’t know,’ ” Snow says of the song. “I was like, ‘No guys, it’s really cool. I know we can do something with it.’ It ended up being Ian and I at the space and we wrote most of it through the keyboard line, and then came up with a cool slide guitar thing.”

“That’s her discerning abilities and managerial attitude,” Hilvert says. “We hold ourselves to a good standard and make songs we believe in.”

So far, Sungaze has surmounted the challenges of finding a stable lineup, booking their own shows and writing, recording and playing out, all while Hilvert and Snow navigate the oft-told pitfalls of being soulmates and bandmates, which they manage quite well. They also self-produced the video for their first single “New Familiar,” shot by Mechlem’s sister in the North Carolina environs where Hilvert and Snow’s romance blossomed.

Most importantly, Sungaze has evolved from a project featuring a guitarist searching for a new creative outlet and a keyboardist with one foot out the door into a cohesive band with a definable sound and a grounded sense of the future. The band’s first singles have garnered attention from online music press outlets and their touring (they recently played several dates across Texas) has helped further build up anticipation for the new LP.

“We’re definitely just kind of going with the flow, whatever comes up,” Hilvert says. “We’re not trying to dominate or conquer the world, just seeing what comes of it. If people like our music, we’re in business.”