The band will be debuting new music during their March 30 show. 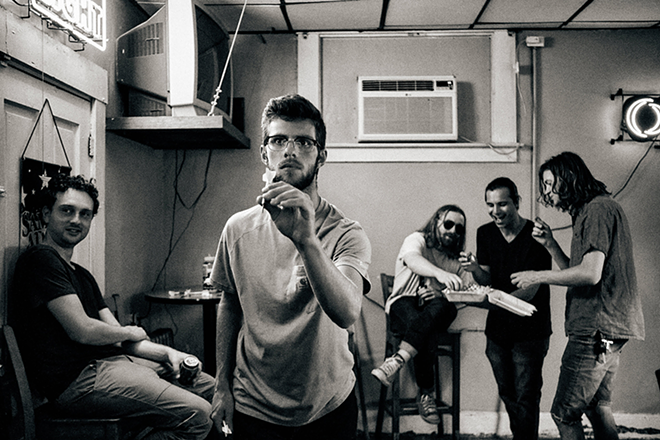 A wise sage once noted you can't come home until you leave. Or words to that effect. At any rate, Cincinnati's Sylmar has taken those words to heart by hitting the road for their second real tour since a pre-pandemic world actually welcomed and encouraged such news.

The self-described Stoner Jazz quintet embarked on a Midwest tour late last year, playing  Lexington, Louisville, Chicago, Columbus and Cleveland before returning to appear with Motherfolk for their annual Christmas extravaganza at Bogart's.

Four months later, Sylmar is in the midst of a similarly structured middle-of-the-country walkabout to once again delight live audiences with songs from their recently released sophomore full length album, Glass Ladders, as well as new songs that the band wrote during lockdown isolation and new material created within the past few weeks.

The band is hoping to seriously shorten the amount of time between Glass Ladders and their next full length release, given the four year span that separated their 2017 debut and Glass Ladders.

To that end, at least some of the new material is making its way onto stages and into Sylmar fans' ears during this run of shows, though none quite so anticipated as the band's local return when they roar into MOTR Pub on March 30. Charleston, South Carolina Psych Blues quintet 87 Nights will kick off the evening.

“We've been writing a cast of new songs over the winter months, and the show should include six to seven brand new songs not heard by the hometown crowd,” says Sylmar frontman Brian McCullough. “We wanted to use this tour to workshop new ideas, see how the audience reacts, and hopefully polish them up for recording.”

Because the MOTR show is a mid-week booking, McCullough notes that things will get started earlier than usual on Main Street (“It is a happy hour show, with music starting at 8 p.m., catering to those 9-5ers...”). After 87 Nights gets the ball rolling, Sylmar will offer up a pair of 40-minute sets. The band has nearly or completely sold out the Woodward Theater for previous shows, but they intentionally scaled things back for this performance.

“We wanted to play MOTR this time around, instead of much larger capacity Woodward, because we're playing some of the best 200-capacity rooms across the Midwest,” McCullough says. “We wanted to keep the same vibe at home.”

Sylmar's return to MOTR Pub will be a rare ticketed show at the club. Tickets to the show will run $12 in advance and $15 on the day of the show. Proof of vaccination or a negative COVID-19 test (within 72 hours of admittance) will be required for all attendees.

McCullough says he and the band are stoked to be back on the road with some regularity, even with the shifting landscape in a (hopefully) post-pandemic world.

“Besides showing proof of vaccination, we haven't noticed a massive difference in shows,” he says. “Some venues are still rebuilding a following, but it seems like others have exploded and built a whole new batch of loyal regulars and showgoers. We hope to help bring the juju back to MOTR Pub with a packed show.”

You heard the man. Embrace your inner sardine and wedge yourself into MOTR so tight you can't move your arms to clap. Hey, nobody said anything about social distancing. Sylmar is back in town. Time to get your dance on.

Doors are at 7 p.m. on March 30. As of press time, a negative COVID test or proof of vaccination is required for entry. Tickets are $12 in advance and $15 on the day of the show. Get more info at motrpub.com.