The Clifton-area venue, which hosted concerts by the likes of Nirvana, The Afghan Whigs and The Jesus Lizard in the late ’80s, will celebrate the era with a pair of shows in mid-October, followed by a discussion at Herzog Music about early Cincinnati Pun 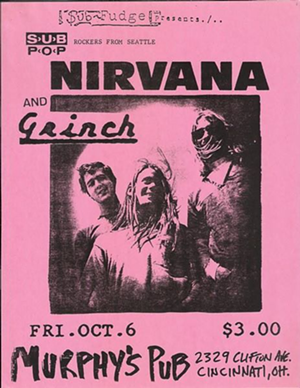 Murphy’s Pub has been a mainstay University of Cincinnati-area hangout since 1969, nestled just a few blocks down the hill from campus on West Clifton Avenue.

As the ’80s turned into the ’90s, Murphy’s Pub was a haven for local acts — including young upstarts The Afghan Whigs — as well as touring bands like The Jesus Lizard (according to The Jesus Lizard Book, their 1989 Murphy's show was the band's first outside of Chicago), L7, Unsane, The Laughing Hyenas and Nirvana, who came to the club on Oct. 6, 1989, on the soon-to-be-huge group’s tour for debut album Bleach (released that June). Local print shop We Have Become Vikings memorialized that show — which had a quite reasonable $3 cover charge — last year by putting the original flyer on a T-shirt to raise funds for Women Helping Women.

On Oct. 18 and 19, the spirit of that era of Murphy’s will return with the “Dirty Thirty” celebration, honoring the 30th anniversary of the bar’s brief stint as Greater Cincinnati’s underground music hotspot. Musicians from the ’80s Punk/Post Punk local scene, as well as likeminded current acts, will perform in the club’s back room, where those early performances took place.

Bands to appear over the two nights include 11,000 Switches, The Tigerlilies, The Mudlarks, Smoothy, IdleAires, Tweens, TigerSex, Stallone N’ Roses and The Dummy Ups, featuring members of The Customs, The Auburnaires and The Erector Set.

Advanced tickets for the Dirty Thirty concerts ($15 for one-night or $25 for two-day passes) are available for purchase in person at Murphy’s Pub, Shake It Records and Herzog Music. 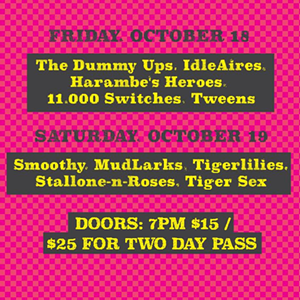 Another special "supergroup" performing during the Oct. 18-19 celebration is Harambe’s Heroes, which, like The Dummy Ups, features members of some former Cincinnati-area bands that are featured on the forthcoming We Were Living in Cincinnati compilation album, which chronicles the Queen City’s early Punk scene.

That anthology — being released later this year on Chicago’s HoZac Records (in conjunction with locally-based Shake It Records) with the subtitle “Punk and Underground Sounds from Ohio’s Queen City (1975-1982)” — was compiled by Peter Aaron, whose Sub-Fudge org did the booking at Murphy’s during the “Dirty Thirty” years.

On Oct. 20, Aaron — now an author and musician living in New York — will moderate We Were Living in Cincinnati: A Punk Panel, a discussion about the Queen City’s Punk Rock past at downtown’s Herzog Music (811 Race St., herzogmusic.com).

Photo: HoZac Records
The Dents on the cover of the 'We Were Living in Cincinnati' compilation

According to a press release, Aaron will be joined on the panel by artists who appear on the compilation, including “local luminaries Mike Enright (the Ed Davis Band), Jim Cole (the Customs), David Lewis (11,000 Switches), Robert Beatty (Beef), Vivien Rusche (the Dents, Alterior Motives), Forest Bivens (the Customs, Beef, the Verbs), Doug Hallet (Dream 286, the Dents, Latex Theatre)  and John Schmidt (the Erector Set, the Malcontent).”

Writer Bill Furbee chatted with Aaron late last year for CityBeat about his time in Cincinnati and what he’s been up to since, including with his bands (most notably Chrome Cranks) and as the author of books like I Know Better Now: My Life Before, During, and After the Ramones, a biography of Richie Ramone he co-wrote with the Punk legend. Aaron said he had amassed a collection of tapes of local Punk acts over the years and, at the time of the interview, he was digitizing them and plotting out the parameters of the HoZac project, which he said could be released as two volumes.

“The starting point will be 1975, which is when Bitter Blood’s ‘Picnic,’ an almost Proto Punk record, came out,” Aaron said of the compilation. “That’s an amazing single. They started out in the late ’60s as Bitter Blood Street Theatre, just a way-out band.”