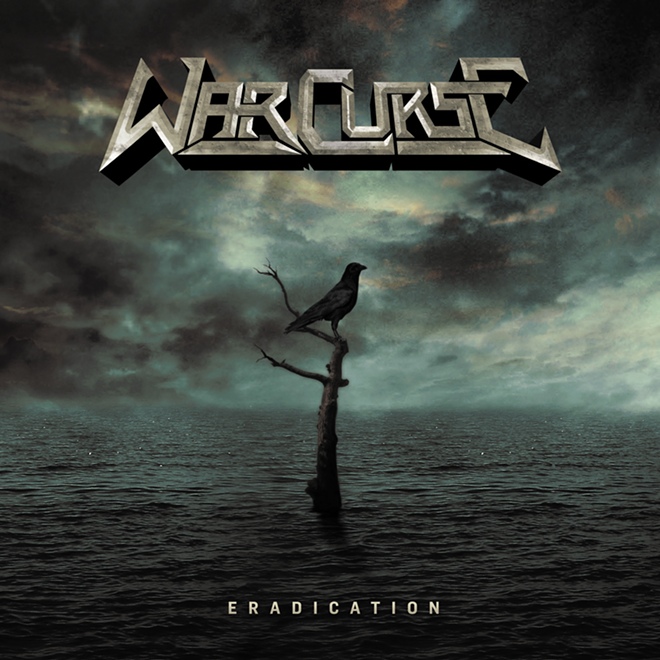 You can’t fake a good Thrash Metal album. As one of the first, most venerated genres of Metal, fans have been picking apart every aspect of Thrash releases since Metallica’s Kill ’Em All in 1983. Every riff, drum blast and solo is analyzed with ruthless precision and slackers are immediately ousted.

War Curse has been making an impact on Cincinnati and beyond with an unerring devotion to Thrash Metal delivered the old-school way: loud, fast and unrelenting. The band’s first album, 2015’s Final Days, was quickly latched onto by fans and critics alike for razor-sharp musicianship and phenomenal songwriting. War Curse’s live show only further established its place among Thrash’s “Next Big Things” and with the release of Eradication any nagging doubts of their talent have well and truly been crushed.

The album gallops out of the gate with “Asylum” — featuring a guest solo by Bay Area Thrash legend Glen Alvelais (Forbidden, Testament) — and, like their forefathers before them, War Curse took great care to construct a track that is deceptive in its hooks. The aggression cannot be denied but peeling back the layers of the song only gives way to more depth, technicality and addictive loops. It’s a characteristic of all great Thrash albums and War Curse knows that. All the anger in the world will only get you so far — you need to say and do something with it if you’re going to get anywhere in the scene.

The skin-flaying leads still need an anchor from which to launch and that’s amply provided by vocalist Blaine Gordon. After joining in 2017, Gordon had a large mic to step up to in replacing original vocalist Tarek Puska. But fans need only listen to the broad range presented on “Serpent” (for which the band filmed a video) or the villainous growl of “Possession” to know that Gordon has more than earned his slot as frontman.

War Curse is obviously influenced by the likes of Testament, Exodus, Morbid Angel and other Thrash heavyweights and, being fans of the genre themselves, the musicians were able to enlist some help to give Eradication even more credibility. In addition to Alvelais, War Curse brought in guitarist Kragen Lum (Psychosis, Heathen) for “Serpent” and singer Kyle Thomas (Exhorder, Floodgate) for “Deadly Silence” and the performances of each made the respective tracks that much more authentic to the Bay Area Thrash of the ’90s and beyond.

Throughout the 43 minutes of Eradication, War Curse also takes care to exhibit a rare trait among their Thrash brethren: restraint. This isn’t to say that you’ll be hearing any ballads in the eight tracks, but the band does recognize the value of giving fans a chance to breathe before bringing the riff back into the ring for another round; none of the runtime is filler but there is just enough variance in speed and volume to keep the tracks fresh and unique.

After the release of Final Days, War Curse was hell-bent on delivering a follow up that lived up to decidedly lofty expectations. The mantle crafted by early Thrash pioneers is currently being passed along, with rocky results at times, but with bands like War Curse still fighting for honest, visceral, scrupulously constructed Thrash and writing and recording albums like Eradication, the survival of one of Metal’s most important genres is all but guaranteed.

Get more on War Curse at warcurse.com.