Looking back at some of the top albums and EPs released by Cincinnati musicians in 2017, it’s clear that 2018 has its work cut out for it if it wants to best the previous year. But as several of the area’s biggest artists announce new projects, that prospect seems more and more likely. 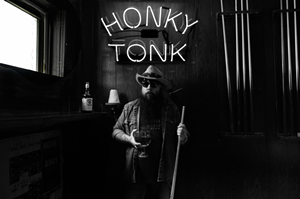 Between frequent live dates (despite living part-time in the Austin, Texas area, he still plays in Cincinnati are a regular basis), Moore entered a Nashville studio for a planned EP with producer/songwriter Dean Miller, the son of the legendary Roger Miller. But the pair’s chemistry and success of the “Mr. Honky Tonk” single turned the EP into a full album project. Mr. Honky Tonk (the album) is slated for release Feb. 23 on Lawrenceburg, Ind. label Sol Records.

• The solo debut from Foxy Shazam’s dynamic frontman Eric Nally has been teased since his appearance on the Macklemore and Ryan Lewis’ 2015 single “Downtown.” That cameo took Nally around the world as he toured with the Hip Hop duo, but in 2017 the singer found time to release singles like “Ruby” and “Black,” grand Electronic/R&B-tinged Pop tracks that offered a peek into his forthcoming EP, Madville.

Nally told the music site Consequence of Sound that Madville is more than just music, though it is the cornerstone of the “story-driven multimedia project.” Each song on the EP will have an accompanying music video and come from the perspective of a different character, who seem to reflect different aspects of Nally’s own persona and personality. Expect the full EP to be released later this year.

• Last year was the first full one for Blvck Seeds, and on so many levels, it was a remarkable start for the collective. Calling Blvck Seeds a “music group” is insufficient — Siri Imani, Aziza Love, Pxvce and Jessi Jumanji are also serious community activists. The foursome’s artistic output also extends beyond the parameters of simply music; the members incorporate not only wide-ranging musical styles (rooted in Soul and Hip Hop), but also various other mediums, including visual art and poetry.

Blvck Seeds’ 2017 musical accomplishments were plentiful. Besides regular shows, workshops and residencies, the group headed up a spoken-word stage at the massive Ubahn Fest, joined a guestlist on Bootsy Collins’ World Wide Funk album that included legends like Chuck D, Doug E. Fresh, Iggy Pop and Stanley Clarke and won a Cincinnati Entertainment Award. Blvck Seeds’ year ended with a feature story on vice.com in which Pxvce announced that a debut EP was in the works.

Besides being a popular touring draw, Freekbass’ recording career also continues to soar — his most recent full-length, CINCINNATI, came out on the widely respected Ropeadope label. He’s currently working on the follow-up, writing and recording with industry heavyweights/producers Lonnie Marshall and Itaal Shur, his former bandmate in the seminal Cincinnati band Sleep Theatre who went on to acclaim and success by writing songs for artists like Maxwell and Enrique Iglesias (Shur also co-wrote the huge Santana/Rob Thomas hit “Smooth”).

• Other Cincinnati acts with recording projects set for 2018 include New Moons (whose Blood in the Waves EP just dropped on Jan. 2), Current Events, Audley, Ampline, Moonbeau, Mira, Wonky Tonk and Cool Life, a new band featuring members of Honeyspiders and The Skulx (visit citybeat.com to check out the video for the group’s debut single, “Waves,” featuring special guest Eric Nally).