Darker Side of the Moon 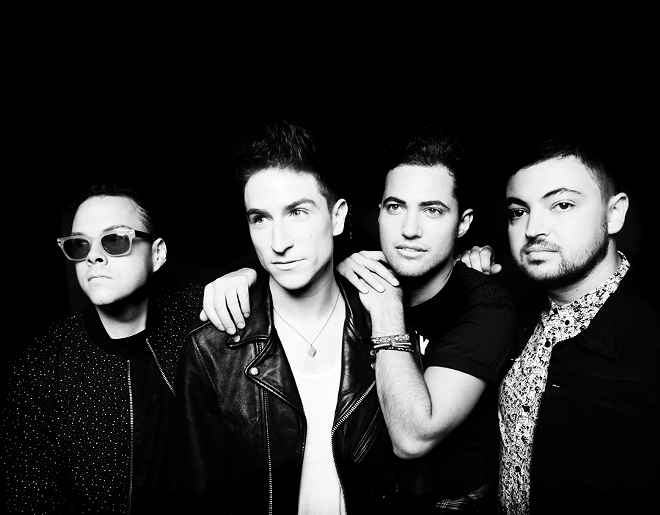 The delirious success that Walk the Moon has experienced since the 2010 release of I Want! I Want! and its infectious and brilliantly videographed single “Anna Sun” has been mind boggling, to say the very least. The Cincinnati quartet — vocalist/keyboardist Nick Petricca, guitarist/vocalist Eli Maiman, bassist Kevin Ray and drummer Sean Waugaman — traveled around the country and eventually the globe for close to half a decade, amassing a fervent and increasingly large fan base until 2014’s Talking is Hard and its megawatt single “Shut Up and Dance” shot them into stratospheric superstardom.

And yet not all was well within the Walk the Moon camp. Last year’s Work This Body tour was cut short to allow frontman Nick Petricca to sit vigil for his terminally ill father. It was a tragedy that struck the core of the entire band.

“It was awful. (Nick’s father) Joe had been battling Alzheimer’s disease for 10 years, I think,” Maiman says. “Joe was a great guy and it certainly had weighed on Nick since I’ve known him.”

After a fairly long time to reflect and recover, the band was ready to return to work, albeit with a little rust in the pipes. The foursome eased its way back into the frantic pace the musicians had previously established and maintained.

“We were coming off this long period of not doing anything, so diving straight in was kind of like going for a very long run after sitting on your ass for an entire year,” Maiman says. “We started off doing a couple of weeks here, a couple of weeks there and finished with a string of recording earlier this year to just get it done, because we’re anxious to get back out there. We had been doing 300 days a year on the road before we just stopped. We wanted to put out new music and get back into that live environment and share performances with fans again.”

The new music sharing will begin when Walk the Moon’s new album — which its label since 2012, RCA Records, is strenuously keeping under wraps, including the actual title — is released later this year. Maiman notes that there is a fairly substantial difference between Talking is Hard and the band’s imminent new set.

“With Talking is Hard, we were offering up a lot of answers,” he says. “There were themes of overcoming adversity and love is the answer. We went through a lot of tough personal stuff over the past year and with the political climate in America right now, we found ourselves having more questions than answers. With this record, we’re less afraid of letting the questions be what we’re putting out there, as opposed to solving all the world’s problems in three-and-a-half minutes.”

Walk the Moon did alter its songwriting process slightly with the new material, although Maiman quickly clarifies that “process” is a strong description of how they arrive at a song.

“It’s not so much a process as it’s songwriting chaos,” he says. “It’s files of stuff that you’re working on on a computer, or it’s a jam in soundcheck or something that Nick works up with a producer. Songs are coming in from everywhere. What’s changed is that we’re really not afraid to explore any options. A good song is a good song, no matter where it comes from.”

The questioning aspect of the band’s new material, clearly an outgrowth of the last election and their personal struggles, resulted in the album having a slightly darker tone. Of course, from their perspective, dark is a relative term.

“I think it’s dark by Walk the Moon standards,” Maiman says. “ ‘Compared to what?’ is what I’d say. It’s more introspective, the lyrics are very personal and are often drawn directly from our personal experiences for the last couple of years. So while the lyrics are getting smaller and more intimate, the sound of the record is much larger than we’ve ever been before. It’s much more epic.”

Part of that epic sound can be traced to the two producers that helped the band shape the new album. Mike Elizondo (Dr. Dre, Eminem, Mastodon, Regina Spektor) and Mike Crossey (Arctic Monkeys, The 1975, Wolf Alice) each brought a unique flavor to the sessions.

“We had Mike Elizondo, who’s coming from a little bit more of a Hip Hop background, and Mike Crossey, who’s more of a mad scientist, studio guru Rock guy,” Maiman says. “I think it created a really nice, diverse group of songs for this record.”

One of the big benchmarks of 2016 for Walk the Moon was scoring the cover of the iconic Ghostbusters theme for last year’s all-female reboot. Working once again with Talking is Hard producer Tim Pagnotta, the band cranked out its frenetic take on the song in a day and a half.

“We did that on our first day back from a 22-country tour,” Maiman says. “We took a flight from Chile to Los Angeles, went straight to the studio and did it in 36 hours. The recording is kind of hazy in my mind, but the goal with doing it was kind of recreating the version that we had in our heads, like when you’re singing it in the shower and playing air guitar. We wanted it to sound that big while remaining faithful to the original.”

After years of amazing accomplishments, Maiman has a pretty simple scorecard for keeping track of the high points.

“I love writing, I love recording, but performing is the thing I love most,” he says. “That’s why I started playing guitar, for the performance aspect and the connection with other people. Playing (legendary Colorado outdoor venue) Red Rocks a couple years ago was a highlight, getting to open for The Rolling Stones (in Detroit in 2015) is way up there. This week, we’re playing Mexico City, Quito, Ecuador and then Rock in Rio in Brazil. In those three dates, we’re playing with Incubus, Aerosmith, Alicia Keys and Justin Timberlake. That’s pretty cool.”

The reason Walk the Moon can share stages with that range of talent is the same reason the band can balance the sunshine of its previous work with the darker hues of their new songs.

“It all works together,” Maiman says. “It’s still Nick singing over me and Sean and Kevin, playing as hard as we fucking can. As long as we do that, it’s going to be solid Walk the Moon.”