Getting the story story behind the howlin,' one-man, roots-rocking machine was a grave matter 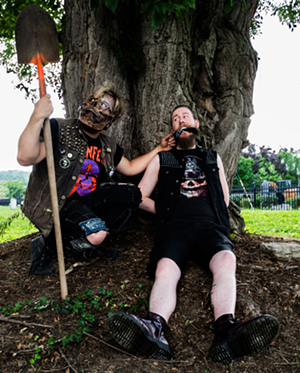 I felt something tickle the back of my neck, telling me it wasn’t a good idea to meet Dead Man — of the Kentucky-based, one-man band Dead Man String Band — in a cemetery for our initial interview. He has a bit of a reputation for speaking his mind, getting up close and (very) personal with his fans and generally doing what you’d expect from an undead ghoul brought back to life and handed a guitar.

Still, I soldiered on and did my best to ignore that tickle.

I awoke tied to a tree, my own bandana shoved into my mouth. A necrotic musician was stroking my cheek. I realized the tickle came from his shovel.

Luckily for me, Rob McAllister, Dead Man’s alter ego, sent the musician a message (who knew zombies could text?) and cleared the whole thing up. After some stitches and apologies, I sat down with McAllister and Dead Man at a Covington watering hole to learn more about the man with and without skin.

The genesis of the music project came in 2014 through a fluke and a desire to not lose out on a show opportunity.

“The name is deceiving enough because originally it was supposed to be a string band,” McAllister explains of Dead Man String Band’s origins. “Then a week before the first show, the band portion bailed, so I just showed. The poster was made, so I kept the name and showed up with a kick drum and it just kept snowballing from there. It was actually supposed to be a gypsy-style string band and it turned into… this. I don’t know how that happened.”

The project evolved when the Dead Man visual aesthetic was introduced. What started with a coffin intro and white face paint was fleshed out (for lack of a better term) when a friend of McAllister — Tyler Pasquale of Wicked Corpse Designs — created a one-of-a-kind mask to give Dead Man his face.

“That was where I started doing a character for the show instead of, ‘This is me. I’m dead.’ Then it became this pervy, Beetlejuice-type character,” McAllister says.

“Basically, I died in the ’30s via angry mob and was resurrected by some witch doctors,” the beast insists after giving McAllister a playful smack with a roadkill raccoon. “Then I was around in the ’80s and I couldn’t stand the culture so I killed myself again and got brought back just recently by an old-timer. Luckily, the scene is more me, so I slid into it.”

Whichever side you believe, Dead Man String Band has since made itself known around the area with near constant performances, playing shows of all kinds in front of crowds ranging from old-school Honky Tonk fans and crust punks to college kids just looking to dance (which, according to Dead Man’s rotting brain, was one of the weirdest crowds Northside hangout The Comet has ever seen). With a guitar, several drums, a massive pedal-board and a traditional Appalachian picking style, Dead Man crafts old-fashioned Honky Tonk tunes, warps them through a Heavy Metal rig and sprinkles in some macabre humor to make the outcome truly a Dead Man production.

“I have completely separated from it — I’m sweating, I’m dehydrated after the show and I don’t recognize ’til I’m offstage and I’m like, ‘Oh, I can’t walk right now,’ ” he says of his onstage transformation. “I’ve collapsed after shows and realized I didn’t drink anything during the show. It’s more of an honest version of me — of how I’d want to do it.”

At this point, Dead Man stops staring at butts and chimes in. “Oh Rob, he sucks, he can’t pull off the physical prowess that I possess to pull off a show like that. He can’t keep his cardio intact, really,” he says. “He’s kind of a fat guy. I’m only fat because I’m in the bloated part of my necrosis. I’ll have that surfer’s bod soon. Rob has too much care for what other people think. I will spit gin into the crowd, not really thinking if they want to be covered in gin. I will climb on the bar and drink from their tap, which has gotten me kicked out of a few bars. Rob keeps it showman-like; I keep it show.”

At a Dead Man String Band live show, the eyes and ears from everyone in the room can’t help but be drawn in. Between the high-gain blasts of guitar and drums (with nary a break in between songs to take a drink or tune a string), Dead Man’s hilarious banter and the sideshow intrigue of a one-man band playing traditional-style songs in a dead skin mask, spiked vest and patched pants, a Dead Man String Band show is compelling. After all, it takes great skill to get a crowd to come back to fill their noses with that sweaty, old-meat smell.

As our meet-up is winding down, Dead Man asks to give the last word. But since that word was “bitches,” McAllister gives it a go, saying, “When I put the mask on, it became completely free expression.”

And in many ways, that sums up why Dead Man String Band has been able to make such a mighty splash in a relatively short amount of time.

For all the theatric, exaggerated presentation, Dead Man String Band brings a lot of heart (pumping or otherwise), creativity and earnestness to the stage. The mask may physically hide who is beneath it, but it also gives a clearer picture of what’s inside the wearer. McAllister was able to find a way to shed his corporeal form and shift it into one with a little less flesh and more gusto, enabling him to truly embody something new that is inviting to fans of all kinds.

Not bad for a guy whose jaw detaches when he burps.