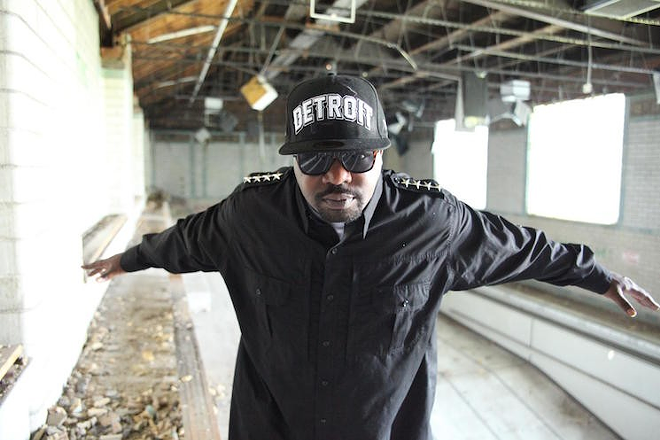 A pioneering figure in Detroit Hip Hop, Esham’s musical life began in the late 1980s, as he formulated a gritty, dark and aggressive style that laid the groundwork for Motor City big-timers from Eminem to Insane Clown Posse, while providing inspiration for countless others in the broader Hip Hop underground.

With a switchblade-sharp delivery and viscerally violent and raw imagery in his lyrics, Esham is the self-proclaimed originator of Acid Rap and he was also an early influence on the Horrorcore genre. The MC began as a successful DIY artist (starting his Reel Life Productions label when he was just 15) and his career has taken him through label stints with the TVT-distributed imprint Overcore and ICP’s Psychopathic Records.

Through it all, Esham has been unwaveringly prolific in terms of recorded output, featuring with other artists (including Kool Keith and ICP) and rarely going more than a couple of years between his own releases. Beginning with 1989’s Boomin’ Words from Hell, his solo discography includes more than 30 albums, EPs, mixtapes and compilations. Last year Esham released the full-length Dead of Winter and just a couple of months ago he dropped the single “Under Surveillance,” on which he growls, “They want me dead but I am not/I can’t rock ice, I’m too damn hot.”

On his current Afraid of the Dark tour — which comes to Northside Yacht Club on Thursday, June 27 — Esham is performing with a live Hard Rock band. Treason, Lyrics and DJ NOAHIMEAN (Animal Crackers) are also on the bill.