Faith No More Just Canceled Its Cincinnati Stop, But Here's Our Q&A with Co-Founder Roddy Bottum About the Band's Rise

The band rose from the underground to have one of the most recognizable songs (and music videos) of the '90s. 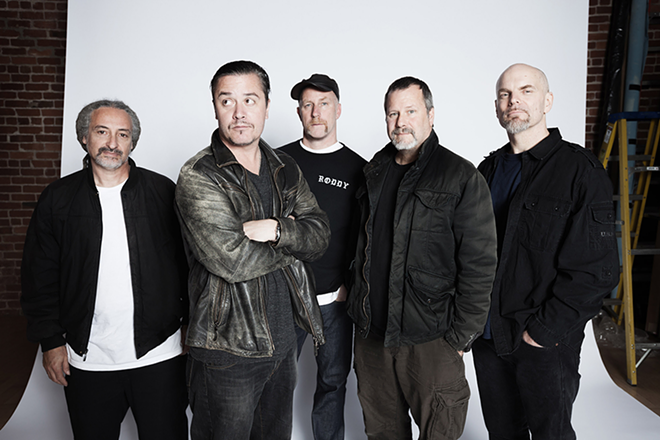 UPDATE: As of Sept. 14, Faith No More has canceled its tour due to what singer Mike Patton calls mental health reasons.

​​Faith No More is a curious case. The five-piece band — which currently includes drummer Mike Bordin, keyboardist Roddy Bottum, bassist Billy Gould, guitarist Jon Hudson and singer Mike Patton — came out of an early 1980s San Francisco underground scene armed with an unorthodox sound and aesthetic that confounded as many as it piqued: dirge-like Metal riffs punctuated by massive, keyboard-driven hooks, coming off like a messier Public Image Ltd. minus Johnny Rotten. The vocals, often shouted via a revolving door of singers, were almost an afterthought until Chuck Mosley entered the picture for the band’s 1985 debut, We Care a Lot.

The follow-up, 1987’s Introduce Yourself, featured a revamped version of the debut’s title track, “We Care a Lot,” which became a minor hit on MTV and introduced Faith No More to a broader audience than they ever thought possible. Patton replaced Mosley in 1988, kick-starting the band’s creative evolution behind its new frontman’s versatile, octave-jumping vocal delivery and swaggering, often peculiar disposition.

1989’s The Real Thing cemented Faith No More’s move from minor curiosity to mainstream fixtures. The album’s centerpiece, the aptly titled “Epic,” was a top 10 hit and its video was in constant rotation on MTV. The Real Thing sold 4 million copies worldwide but it was the next effort, 1992’s art-damaged Angel Dust, that would serve as Faith No More’s creative landmark.

Released amid the height of the Grunge Revolution, Angel Dust was unlike anything on the landscape, a surreal genre-jumper that mixed heavy guitars, atmospheric keyboards and off-kilter yet somehow cohesive song structures, all topped with Patton’s distinctive delivery, which moves from soaring operatics to guttural yelps and back again. In 2003, Kerrang! listed Angel Dust as the most influential album of all time, which is obviously overstating the case, but not by as much as one might suspect.

Faith No More dropped two more records with diminishing returns (1995’s King for a Day … Fool for a Lifetime and 1997’s Record of the Year) before breaking up in 1998. Yet, like any band with an itch to revisit its legacy, the fivesome reformed to play live shows in 2009 and eventually released an album of new material. 2015’s Sol Invictus was a more sonically streamlined but no less dynamic effort.

CityBeat recently connected with Faith No More’s co-founder/keyboardist Roddy Bottum to discuss the band’s rise from underground oddballs to platinum sellers with the ability to headline festivals like Riot Fest in Chicago and draw massive crowds overseas more than 30 years after its unlikely breakthrough.

CityBeat: It’s been six years since Faith No More last released an album and played a live show. What’s it like for you to go back to the band again after such a long break?

Roddy Bottum: I have mixed feelings about it. It starts out like it’s a job, and we’ve made this decision and we’re going to do it. It starts out sort of like that but really quickly it turns into an emotional journey because of all the music that we’ve made together in that band. We started from such a young age. It’s all these deep-rooted songs and musical expressions that we made from when we were so young and so impressionable and I can’t help but get swept up into the emotional aspect of it.

CB: I didn’t realize until I started digging into the history of the band that you, Billy (Gould) and Mike (Bordin) starting playing together just out of high school more than 40 years ago. What would the 18-year-old Roddy think of where the band has gone over the years?

RB: Yeah, it’s crazy. We were such cocky young kids at that age. Billy and I grew up in Los Angeles together from the age of, like, 10. When we formed the band and started making music, we kind of had high aspirations that were ridiculous but kind of founded. We were making this preposterous, sort of really bombastic sound. I kind of never really thought it was going to do what it did, but we always acted like it was going to do well and that we were kind of bigger than we were. And at one point things just kind of caught up and it became a successful sort of thing. It was a surprise to me. Looking back from where I am and how this band morphed and became successful, it would have shocked young Roddy.

CB: In the early days, you guys were more of a performance-art band playing heavy, hypnotic riffs behind a revolving door of different singers. What do you remember about the approach of the band at that point?

RB: I think we started doing what we started doing because we were really young and super-experimental. We made these crazy riffs that we would play over and over again. It felt like a very young person’s perspective. We were aiming to shock and provoke people. We were the product of the community we were making music in, which was a lot of really dark and pretty seriously toned Post Punk kind of music, and we were trying to combat against that.

We did very dark music but we were fully experimental. The concept of bringing in different singers and switching singers was sort of part of that. We didn’t really write traditional songs or commercially viable material because we didn’t have the tools to do that.

CB: You had been a band for five years before the first record with Chuck Mosley as singer. How did the band change by then from the early days?

RB: Even when Chuck was in the band and we made a record with our first (permanent) singer, I don’t think he really had the integrity to sing regular songs. I love our first records, don’t get me wrong, but I think they limited what we were capable of doing in terms of writing orthodox songs or commercially viable songs. I think once Mike (Patton) got into the band — and he has such an amazing voice and he’s so versatile — we were able to do whatever we wanted to do. And by that point, the three of us had been playing together for so long. I think we were better at what we did; our tools were more sharpened to do whatever we wanted to do. We just started to explore different things. Like, “Oh, let’s make a Country Western song. Let’s make an operatic-sounding song.” We started going into as many directions as we thought we could to push ourselves. In that push, we ended up probably more conventional than we thought we ever could.

CB: You once said that tension and the release of tension is what drives Faith No More. Why do you think that is the driving force within the band?

RB: I think I meant the tension among us as people. When we first started touring, it was always butting heads. It’s five different personalities, and that was a big part of what we were. We were really different people. Me being a gay man who grew up with three sisters, and the guitar player at the time, Jim Martin, grew up in a family of three brothers and hunted and stuff. We were polar opposites. That alone is a lot of tension and a lot of butting of heads. But we were also no different than any band — everybody goes on a journey and evolves.

And then you throw into that mix where we’ve gone the past 25 years — all of us separately, all of us together — it’s a lot to bring to the table. We’ve always been pretty up front about the tension that exists between us. I guess it’s healthy, but sometimes not. All I know is that going into the scenario and playing with the band and working with old friends, I always walk away from it a better person. There is a release of tension that happens that sort of makes me thrive and feel good. It’s a matter, at this point, of addressing our past and coming to terms with who we were and who we are now as a group and individually.

Faith No More plays PromoWest Pavilion at OVATION on Sept. 22. All concertgoers are required to provide proof of vaccination or a negative COVID-19 test taken within 72 hours of the show. More info: promowestlive.com. [Editor's note: the show has been canceled as of Sept. 14.]