Jim Morrison’s arrest in early March 1969 for lewd and lascivious behavior during a Florida concert led to a slew of show cancelations; the Cincinnati cancelation was reportedly due to the mayor and others failing to issue permits after the Florida incid

The Doors, on top of the world in 1968
March 30 marks the 50th anniversary of a huge concert at Cincinnati’s Music Hall that, ultimately, never happened.

The Doors were riding a pretty big high at the start of 1969. Jim Morrison, Robby Krieger, John Densmore and Ray Manzarek were members of one of the biggest bands in the world, coming off of a year that saw the release of their only No. 1 album (Waiting For the Sun) and their second No. 1 single, “Hello, I Love You.” Late in 1968, the band had another hit with the single “Touch Me,” setting up a string of tour dates that kicked off 1969 for the band at a sold-out Madison Square Garden. 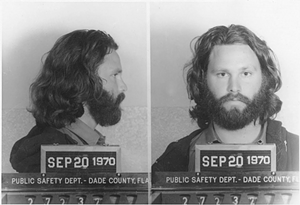 Whether the undeniably drunk Morrison, who stumbled through songs and screamed obscenities throughout the performance, actually whipped it out is still the subject of debate. But the incident — leading to “lewd and lascivious behavior” charges, among others — did cause the cancelation of more than a dozen concerts, including a March 30 visit to Cincinnati’s Music Hall. (Morrison was found guilty in 1970 on the counts of "indecent exposure and open profanity" — misdemeanors — while more serious felony charges were dropped. As the charges — resulting in a sentence of six months of “hard labor” and a small fine — were being appealed, Morrison fled to Paris, where he died on July 3, 1971.)

The Cincinnati concert wasn't canceled by The Doors, though. According to a March 17 wire story from UPI, the promoters of the Cincinnati show (Belkin Productions and Squack Productions) filed a $1 million-plus lawsuit against then-mayor Eugene Ruehlmann, city safety director Henry Sandman and members of the Music Hall Association. According to the suit, the promoters were denied a permit for the city-owned facility because of nervousness following Morrison’s arrest. The suit sought to force the parties to give them the permit, as well as $20,000 in actual damages (the estimated lost ticket sales, though they claimed it would have netted $50,000), plus $1 million in punitive damages.

The promoters claimed in the suit that the defendants conspired with outside forces (in light of outraged protests following the Florida incident) “to bring pressure to bear upon other auditoriums not to make their facilities available for presentation of such concert, and that they did, further, not only in the city of Cincinnati but elsewhere in the United States.”

Making a First Amendment argument, the lawsuit also said that “(the defendants) acted further to evade, destroy and subvert the decisions of all courts, federal state or local, which had properly applied the standards for judgment of obscenity in public presentations enunciated by the U.S. supreme court.”

The wire story also said that “Mayor Ruehlmann said that Cincinnati police were prepared to arrest Jim Morrison, leader of The Doors, and hold him for Miami authorities if he appeared here.”

Responding to the Dade County Sheriff's office’s warrant for his arrest, Morrison (who’d gone with the band on an alleged vacation in the Caribbean) turned himself into the FBI in early April 1969, without the involvement of the CPD.

This Saturday, to commemorate the 50th anniversary of what could have been, area Doors cover band Jim Heil & The Doors of Retrovention will perform at Mount Lookout's The Redmoor. The Pink Doors — a Pink Floyd tribute act — open the show at 8 p.m Tickets are $7 in advance (here) or $12 day of show.