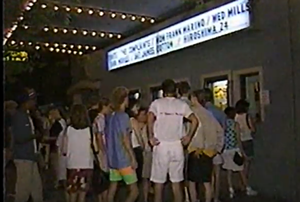 In the mid-’80s, longtime Cincinnati concert venue Bogart's hosted regular concerts by area high school Rock bands which drew respectable crowds. Kinks were being worked out of the "all ages" shows at Bogart's — often underage fans would be cordoned off in the balcony if they were allowed in at all — so teens jumped at the chance to get into the cool grown-up club before they were 18 (the drinking age at the time).

Though Short Vine in Corryville was already a destination for some younger music fans and fashionistas thanks to its wealth of record stores and "alternative" fashion-forward shop Scentiments (the prime source of purple and green hair in the Tri-State thanks to its hearty stock of Manic Panic hair dye), the flood of excitable teens coming in from the suburbs apparently resulted in rowdy shenanigans — some alleged vandalism and general horseplay that upset local businesses like Perkins (which began closing early after the concerts) and Circle K, which valiantly decided to stay open on the "teen dance" nights.

That monkey business was curtailed by a stepped-up police presence, which WCPO reported on in a 1986 clip shared on YouTube by user Bygone Buffalo a few years back. The concert featured in the nightly news segment was the farewell show for a cover band called The Complaints, which featured students from high schools like Xavier and Walnut Hills and generally drew the bulk of their crowd from those schools.

It's a funny snapshot of a simpler age for the Corryville strip that would fall on hard times in subsequent years (with many businesses shuttering) before more recently mounting a redevelopment comeback. The hairdos and old cop cars are totally awesome, too.