The band celebrates the release of its debut recording, 'Death of Stars,' with a performance at Live! at the Ludlow Garage. 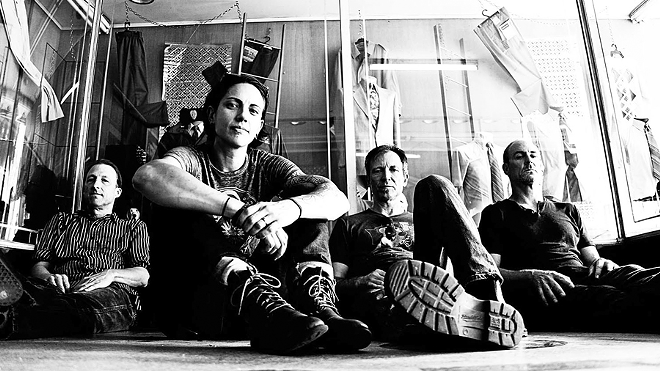 Flying Underground is technically a new band, formed earlier this year. But if the name rings a bell, it’s probably because it was previously known as Brian Lovely’s Flying Underground. Lovely, a veteran singer/songwriter/guitarist/producer (he’s currently also in Gypsy Jazz faves The Faux Frenchmen), says he lost his singing voice to a “neurological curse,” leading him to seek out a new vocalist for the Pop/Rock band, which also includes bassist Dave Ramos and drummer Chris Arduser (known for his work with psychodots, The Bears, The Graveblankets and many other projects). Enter expressive singer Kelly McCracken, a Warren, Ohio native and leader of her own band, The Kellys.

The new-look Flying Underground has been active on the local club/festival front over the past several months. On Wednesday, Nov. 23, the band celebrates the release of its debut recording, the EP Death of Stars, with a performance at Live! at the Ludlow Garage (342 Ludlow Ave., Clifton, liveattheludlowgarage.com). Mike Tittel of New Sincerity Works and Tickled Pink open the 8 p.m. show. Ticket prices range from $12-$25.

The five tracks on Death of Stars showcase the band’s crisp, melodic songwriting and untouchable musical chops, while also introducing McCracken as a versatile and charismatic vocalist. Opening tracks “Rocket Ship” and “Stop Leaving Me Alone” pop with a Cheap Trick-like energy, with McCracken’s voice giving off the attitudinal vibe of peak Runaways. The title track is the EP’s most melodically durable song, its soaring hooks sinking in and sticking immediately, but each track on Death of Stars is an impressive example of dynamic and effective Pop Rock songcraft.

For more on the band, visit facebook.com/flyingundergroundmusic.

• Excellent local singer/songwriter Maurice Mattei will release his latest album, Songs of Peril & Conquest, in conjunction with a show this Friday in the Lounge at the Southgate House Revival (111 E. Sixth St., Newport, southgatehouse.com). Mattei performs at 9 p.m., followed by local instrumental/Surf quartet Grateful Surf. The show is free.

• The first None Other Fest takes place Sunday at Urban Artifact (1660 Blue Rock St., Northside, artifactbeer.com) beginning at 5 p.m. It’s the first in a series of musical events with the stated purpose of raising money “for groups who fight for people who routinely experience being ‘othered’ or bullied within our society.” The inaugural fest focuses on the LGBTQIA community — specifically transgender rights. Along with speakers and an array of other performers, the debut None Other Fest will feature music by The Tigerlilies, Lisa Walker of Wussy, The Whiskey Shambles, mr.phylzzz, In Details, Betsy Ross and more. A requested $5 donation will be donated to the Heartland Trans Wellness and GLSEN organizations. For more on the fest and its mission, visit facebook.com/noneotherfest.