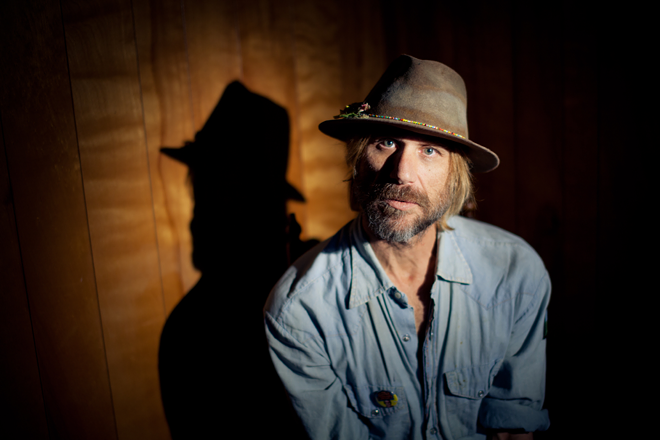 If anybody deserves the chance to see Johnny Cash’s ghost, Todd Snider might be the man. The veteran East Nashville-based singer/songwriter just released Cash Cabin Sessions, Vol. 3, another standout collection of his Folk ramblings, rhymes, rants and nonpareil comic timing. He recorded the new batch of songs at Johnny Cash’s log cabin/sound studio in Hendersonville, Tennessee, with the support of John Carter Cash, Johnny’s son, who lives up the hill.

Snider originally visited this studio a few years ago to watch Loretta Lynn record two songs they co-wrote together. Within days, he says he had repeated dreams of an older Johnny Cash, dressed in black (of course) and standing over him. Freaked out and inspired, he booked studio time immediately — for good mojo’s sake, to make music and maybe meet a certain phantom. Cash Cabin Sessions, Vol. 3 is the result (the first two volumes are still missing).

Snider, at 52 years old, has always been a road scamp, plying his one-man show at almost every other club in America for decades. If you’ve never seen him live, he’s one of the funniest, most wry Folk singers this side of John Prine. His rambling, comic stories in between songs often entertain as much as his sung material — stoner hobo-wit with an absurdist edge and a hint of paranoia.

The new album begins with a stripped-down acoustic lament, “Working on a Song,” where Snider goes meta on his muse and writes about the curious struggles of working on that particular song. “Talking Reality Television Blues” echoes his 1994 song “Talkin’ Seattle Grunge Rock Blues” with its potent, Dylanesque satire. This time around, Snider sings about something more important (and ludicrous) than any musical trend, connecting reality TV to our current political climate: “Then a show called The Apprentice came on and pretty soon/An old man with a comb-over sold us the moon/And we stayed tuned in, now here we are/Reality killed by a reality star.”

Snider’s friends Jason Isbell and Amanda Shires join him on Cash Cabin’s raw finale, “A Timeless Response to Current Events.” With its chorus refrain of “Ain’t that some bullshit,” the song makes it pretty clear where the three singers stand, in case there was ever any doubt.