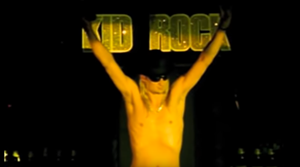 For the second year in a row, rocker and Donald Trump golfing partner Kid Rock has sold out a concert at Riverbend Music Center. The venue announced this morning that there are no tickets left for Mr. Rock's Sept. 28 show, which also features special guest Hank Williams Jr.

Rock's 2019 appearance marks the seventh sellout of this year's Riverbend/PNC Pavilion season. The previous sellouts were The 1975 (May 12), Luke Bryan (June 8) and Vampire Weekend (June 15).

In a press release, Riverbend says not many tickets remain for the July 18 Jimmy Buffett show and the Aug. 22 Jason Aldean concert. The venue says other shows "trending to sell out" include the July 25 Wiz Khalifa concert and the Sept. 22 blink-182/Lil Wayne show.

UPDATE: Hi, Facebook followers! "Own the libs" is sarcasm based on a popular (though apparently not that popular) meme. No libs were actually owned by Kid Rock selling out a concert. Apologies for the confusion.