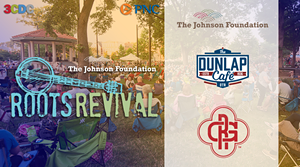 The free “Bandstand Bluegrass” series at Washington Park in Over-the-Rhine has done a great job of spotlighting artists from Greater Cincinnati’s rich Roots music scene for the past few years now. But, though indeed held at the park’s circular bandstand, the title of the series has always been a partial misnomer, as it has featured a variety of Americana strains, not just Bluegrass.

This year’s series begins Thursday with the only non-local act in this summer’s lineup — touring Virginian ensemble Twain — as well as a new, more accurate name. The newly christened “Roots Revival” series continues every Thursday through Aug. 30. After a couple of TBA dates, “Roots Revival” picks up a steady stream of some of the best acts in the Cincinnati area on June 21 with Young Heirlooms. Check out the full lineup below (and click the artist’s name for more on each act).

Aug. 30: Ben Knight and The Welldiggers

The Roots Revival shows are free and begin at 7 p.m. Click here for more info and updates.

And here's a video featuring Young Heirlooms' song "Darling Dear," off of their excellent 2017 release The Hammer, with footage shot at the group's album release show at the Woodward Theater.