The 21-city fall tour kicks off on the same day as the local band's third album is slated for release. 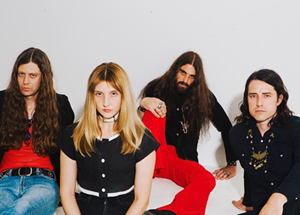 Cincinnati foursome Electric Citizen is set to embark on one of its biggest North American tours yet. This fall, the trippy, heavy rockers will hit the road as direct support on Monster Magnet’s “Mindfucker” tour (named for MM’s latest LP).

The tour kicks off Sept. 28 in Toronto, taking the band coast to coast through the end of October, with shows in Chicago, Denver, Seattle, San Francisco, Dallas, Nashville and New York City, among others.

Along with Kyuss, Monster Magnet was one of the early revivalists of the raw, heavy and psychedelic Hard Rock that Black Sabbath laid the groundwork for in the early ’70s. MM’s early-’90s cult classic Spine of God was a masterpiece of the kind of trippy and melodic “Stoner Rock” that would become an underground music movement that is still going strong. (In the midst of the “Grunge” craze of the mid-’90s, Monster Magnet streamlined its sound and found mainstream success via MTV and radio exposure with hits like “Negasonic Teenage Warhead” and  “Space Lord.”)

Electric Citizen has become one of the brightest lights of that scene, which has inspired a global, cultishly-loyal fanbase. Besides the way guitarist Ross Dolan, singer Laura Dolan, bassist Nick Vogelpohl and drummer Nate Wagner put their own distinct spin on the sound, the Cincy band’s reputation in the community is especially high thanks to some unimpeachable credentials. The group has toured the world with both the music’s early inspirations and some of its more recent forerunners, including The Crazy World of Arthur Brown, Pentagram, Fu Manchu and Budos Band.

Electric Citizen also records for one of the cornerstone labels of the genre, RidingEasy Records, releasing its debut, Sateen, in 2014. Electric Citizen’s stellar 2016 album Higher Time expanded the group’s following even more and garnered glowing reviews from higher profile press outlets like Consequence of Sound and Metal Injection.

Last week, Electric Citizen announced that its third album on RidingEasy is scheduled to be released on the same day the Monster Magnet tour starts, Sept. 28.

The Mindfucker tour isn't coming to Cincinnati (or even very close), but if you're up for a roadtrip/headtrip, tickets go on sale Friday. Find the show dates and ticket links here and learn more about Electric Citizen here.

Light some incense, grab the headphones (large over-ear only!), sink into a beanbag chair and give Higher Time a listen (or, if you’re cool, another listen) below.