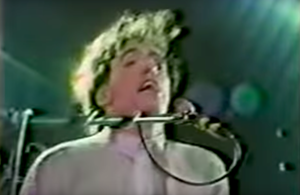 Nine Inch Nails will be inducted into the Rock and Roll Hall of Fame this year as part of the 2020 class, as announced yesterday, and with that achievement, it seems like a fine time to check in with a younger Trent Reznor in his appearance on the Cleveland Breakout Concert Series, which aired on a Cleveland local television channel the mid-1980s

The NIN frontman, a noted geek, genius and electronic music historian, talks about the Cleveland Synth Pop band he was with at the time, Exotic Birds, and what electronic music sounded like — and how it was being received — back then, which was either 1986 or 1987, given details in the interview. According to the video, the group apparently opened for "the Culture Club" at Cleveland's Richfield Coliseum in 1984.

"This year promised to soar the Birds to new heights," the announcer says near the end of the piece.