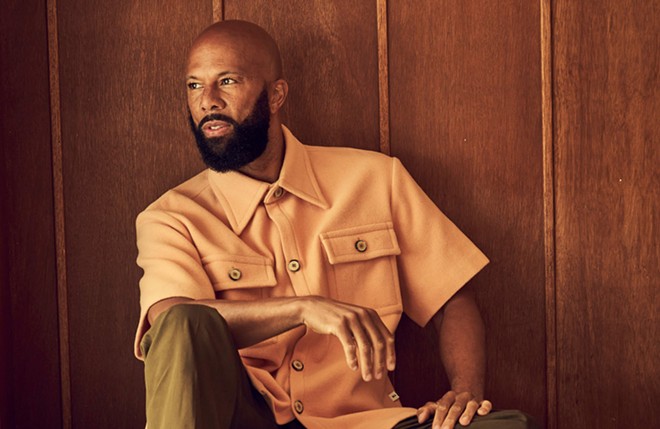 When hip hop legend and Oscar-, Emmy- and Grammy Award-winning artist Common performed with the Cincinnati Pops on Oct. 25, he may have gotten more than he expected.

A video posted to social media shows Cincinnati mayor Aftab Pureval taking to the stage at Music Hall to present Common with the key to the city.

"As the 70th mayor of Cincinnati, it's my honor to give you a key to the city," Pureval said in the video, followed by a call for the audience to "make some noise." 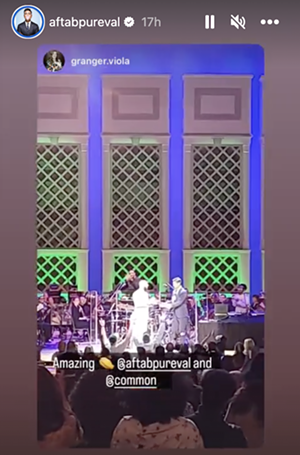 Photo: instagram.com/aftabpureval
A screengrab of Mayor Pureval's Instagram stories capturing him presenting Common with a key to the city.
The clip, posted to Instagram stories by Cincinnati Symphony Orchestra's subscriptions marketing manager Carmen Granger and reshared by Pureval, is grainy but captures Common receiving the honor and lifting the key above his head to the sound of loud applause from concertgoers.

While the key to the city is not in fact a key that opens anything, it is a symbolic honor presented by local leaders to visitors and residents of esteemed importance. Others who have snagged a key to the city in recent years include Bengals coach Zac Taylor, musician Jack White, soccer star Rose Lavelle, EGOT winner Jennifer Hudson, 98 Degrees' Nick and Drew Lachey and a cow named Cincinnati Freedom, who escaped a Camp Washington slaughterhouse in 2002 and evaded capture for 11 days before eventually retiring to a farm sanctuary in New York.

Common was in town to make a rare solo appearance with Pops principal guest conductor Damon Gupton — also an actor, known for his roles in TV shows like Bates Motel and Criminal Minds. The 90-minute performance included some of Common's greatest hits.

This isn't the first time Common has performed with the local orchestra. The rapper, producer, composer, poet, author, actor and activist made his CSO debut as a symphonic artist during the 2016 Classical Roots concert, performing his Oscar-winning song “Glory” from the film Selma with soloist Capathia Jenkins and the Classical Roots choir.

That Cincinnati stop launched a series of appearances with top orchestras including the Houston, Chicago, San Diego, Pittsburgh and National Symphony Orchestras. Many of those performances were led by conductor Gupton.

Common’s music has never been confined to one style or genre, as any fan can testify. But as he’s said in numerous interviews, his heart is rooted in hip hop. His most recent releases (A Beautiful Revolution, Pt. 1 and Pt. 2) feature artists including PJ, Black Thought and Lenny Kravitz.

Common has deep ties to Cincinnati, having spent summers here with his aunt’s family in Bond Hill, where he wrote his first rap verses paying tribute to “the Bond Hill Crew.” Now a hip-hop elder, Common remains an impressive artist, juggling multi-media gigs, and advocating for underprivileged youth through his Common Ground Foundation.

According to his website, the Pops gig is Common’s only scheduled appearance for the rest of 2022.